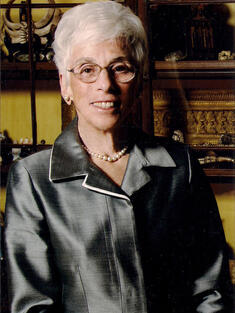 JOCELYN S. NEBENZAHL (Jossy) was a former mountaineer, having summited the Matterhorn and other peaks in the Alps in the early 1950s. She is a graduate of Newcomb College of Tulane University. She was co-founder in 1957 of Kenneth Nebenzahl, Inc., dealers in rare books, maps and manuscripts. She served on the board of Chicago Open Lands; the board of Friends of Ryerson Woods Conservation Area; and the Women’s Board of the University of Chicago. She became active with World Wildlife Fund in 1978, after encountering an effective program in Senegal funded by WWF-US. She and her husband have traveled and trekked extensively in Africa and Asia. They have actively supported WWF projects initiated by their good friends the late Mingma Norbu Sherpa and the late Chandra Gurung in Nepal and Bhutan. Nebenzahl has been active for many years in Hands in Outreach, an educational sponsorship program for underprivileged Nepalese children. One of the girls she sponsored recently graduated from Duke University on a Gates scholarship; another will be going to medical school in Kathmandu. One young Tibetan is now a lama teaching in a monastery, and another is an army guard for His Holiness the Dalai Lama in Darmsala. Nebenzahl is retired, and enjoys having time to spend with her children and grandchildren, to do adventure travel with her husband, and to work toward solutions to the environmental issues that concern her.