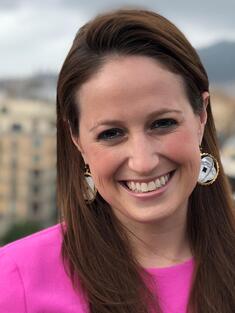 JULIA CARDOZO is a Biden Administration Appointee to the U.S. Department of Veterans Affairs, where she serves as a Policy Advisor in the Office of the Secretary. Prior to that, she was an Assistant State’s Attorney in the Special Victims Division of the State’s Attorney’s Office for Montgomery County, MD. For the majority of her nine years as a prosecutor, she specialized in investigating and prosecuting sex crimes and crimes against children. Prior to law school, Julia was a teacher at The Taft School, where she taught introductory Spanish and helped lead a group of students on a successful ascent of Mount Kilimanjaro in Tanzania. Every summer, Julia volunteers at the Mid-Atlantic Burn Camp, a weeklong therapeutic summer camp for kids who have survived traumatic burn injuries. After noticing reading deficiencies among many of the campers, she began a literacy program at camp and is now affectionately known as the camp librarian. She has a BA from Middlebury College and a JD from The University of Maryland School of Law. She loves spending time in the Adirondack Park in New York and the Rocky Mountains in Colorado.