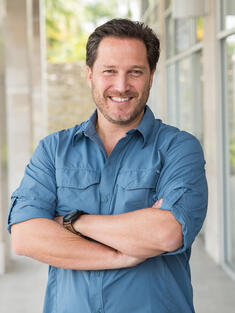 SANTIAGO DUNN is founder and president of Ecoventura, a travel company based in Ecuador. As executive president of Ecoventura, Dunn has always been a visionary with a mission. He strives to be part of the solution surrounding the various issues of sustainable tourism in the Galápagos Islands. Through his actions and accomplishments, he also aspires to inspire others to make a difference. Since 1999, Dunn has worked diligently to green his vessels and operations, protect the environment, and give back to the local community. Ecoventura was the first to be awarded SmartVoyager status, the voluntary ecological certification program developed by the Rainforest Alliance. In 2006, Ecoventura became the first carbon-neutral company in Ecuador by first reducing and then offsetting carbon emissions. In 2008, Dunn’s company introduced the first hybrid energy tour boat in the Galápagos by retrofitting the M/Y Eric with solar panels and wind turbines. Through the Galápagos Marine Biodiversity Fund, established in partnership with WWF to benefit marine conservation, Ecoventura has raised funds for a micro-enterprise business, provided scholarships for local children, and helped control illegal fishing in Galapagos. In recognition of the company’s sustainable tourism efforts, Ecoventura was honored in 2009 with both the prestigious World’s Savers Award from Conde Nast Traveler and Travel + Leisure’s Global Vision Award for Green Cruising. Dunn is a native of Guayaquil, where he lives with his wife and four sons. He graduated from Boston College with a BS in finance and economics and a minor in marketing. He also earned a master’s degree in aviation from Concordia University in Montreal. He enjoys playing tennis, traveling and scuba diving.