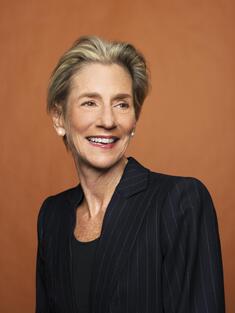 SHELLY LAZARUS has been working, as she would say it, “In the business I love,” for more than four decades, almost all of that time at Ogilvy. Shelly rose through the ranks of Ogilvy & Mather assuming positions of increasing responsibility in the management of the company, including president of O&M Direct North America, Ogilvy & Mather New York and Ogilvy & Mather North America. She was named worldwide CEO of Ogilvy & Mather in 1996 and Chairman in 1997. She became Chairman Emeritus in July 2012. Shelly started at Ogilvy at a time when the agency’s legendary founder David Ogilvy still walked the halls, and personally preached that the purpose of advertising was to build great brands. Under Shelly’s leadership, that essential mission has remained the centerpiece of the company’s philosophy, extending across regions and marketing disciplines, and attracting some of the world’s largest and most respected brands including American Express, BP, Coca-Cola, IBM and Unilever among many others. Shelly has been a frequent industry honoree. Advertising Women of New York selected Shelly as its Woman of the Year in 1994. She was honored by Women in Communications with their Matrix Award in 1995, was named Business Woman of the Year by the New York City Partnership in 1996, and Woman of the Year in 2002 by the Direct Marketing Association (DMA). Shelly was the first woman to receive Columbia Business School’s Distinguished Leader in Business Award as well as the Advertising Educational Foundation’s (AEF) Lifetime Achievement Award. She was inducted into the American Advertising Federation Hall of Fame in 2013 and is also a Hall of Fame member of the DMA, American Marketing Association and Crain's New York Business. Shelly serves on the boards of several corporate, philanthropic and academic institutions: The Blackstone Group, Merck, Rockefeller Capital Management, New York Presbyterian Hospital, Committee Encouraging Corporate Philanthropy, World Wildlife Fund, Partnership for New York City, Lincoln Center, and the Board of Overseers of Columbia Business School, where she received her MBA in 1970. She served for five years as Chairman of the Board of Trustees of Smith College, her alma mater. She is a member of Advertising Women of New York, The Committee of 200, Council on Foreign Relations, and Women’s Forum Inc. She has also served as Chairman of the American Association of Advertising Agencies. Shelly is the wife of Dr. George Lazarus, a New York pediatrician, and mother to their three grown children.