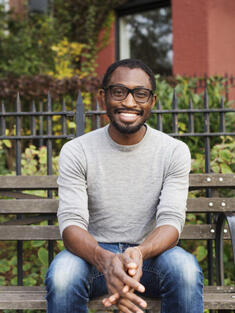 UZODINMA IWEALA is an award-winning writer, filmmaker, and medical doctor. As the CEO of The Africa Center, he is dedicated to promoting a new narrative about Africa and its diaspora. Iweala was the CEO, editor in chief, and co-founder of Ventures Africa magazine, a publication that covers the evolving business, policy, culture, and innovation spaces in Africa. His books include Beasts of No Nation, a novel released in 2005 to critical acclaim and adapted into a major motion picture; Our Kind of People, a non-fiction account of HIV/AIDS in Nigeria released in 2012; and Speak No Evil (2018), a novel about a queer first-generation Nigerian-American teen living in Washington, D.C. His short stories and essays have appeared in numerous publications including The New York Times Magazine, Vanity Fair, and The Paris Review. Iweala was also the founding CEO of the Private Sector Health Alliance of Nigeria, an organization that promotes private-sector investment in health services and health innovation in Nigeria. He sits on the Boards of the Sundance Institute, The International Rescue Committee, and the African Development Bank’s Presidential Youth Advisory Group. A graduate of Harvard University and the Columbia University College of Physicians and Surgeons and a Fellow of The Radcliffe Institute at Harvard University, he lives in Brooklyn, New York.