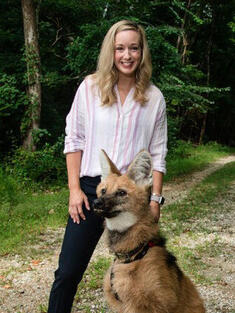 VIRGINIA BUSCH grew up in St. Louis, Missouri. As part of the Busch family, she has always had a connection to wildlife and animals through the SeaWorld and Busch Gardens family of parks. For eight years, she served as Conservation Ambassador for SeaWorld and Busch Gardens as well as president of the SeaWorld & Busch Gardens Conservation Fund. In that role, she assisted in the planning and execution of the parks’ expanding conservation programs, including development and oversight of partnerships to support collaborative research projects. She also served as media spokeswoman for environmental efforts at the parks. Busch contributes to conservation and animal welfare at home and abroad as both chair of the National Council and a Board member for World Wildlife Fund, and as a board member for Wild Earth Allies and the Humane Society of Missouri. She earned a bachelor’s degree in anthropology with an emphasis in animal behavior from Washington University in St. Louis. Busch recently retired after ten years serving as the chief executive officer of the Endangered Wolf Center. The Center’s mission is to preserve and protect Mexican gray wolves, red wolves, and other endangered canids with purpose and passion, through carefully managed breeding and reintroduction programs and through inspiring educational programs.