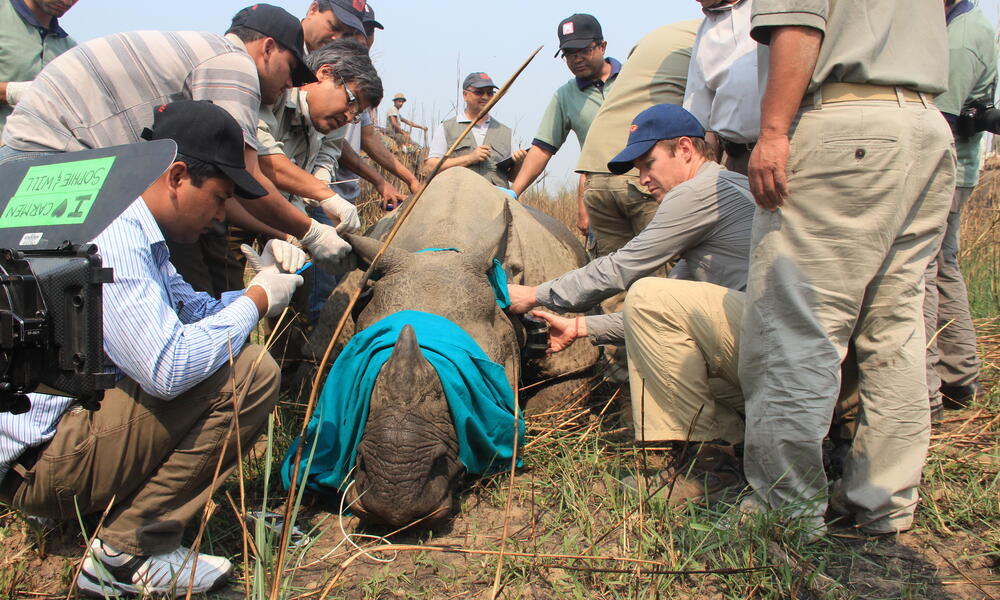 Thank you for your support of wildlife and nature in Nepal. We have sent a message to your mobile device to confirm your pledge. Please check for that message and reply to proceed with your donation.

Lee Poston, Director of Media Relations at World Wildlife Fund, gives a behind-the-scenes look at the making of Chasing Rhinos.

As my plane cleared the Himalayas and descended into Nepal’s Kathmandu Valley I felt the familiar feeling of quiet calm and inner joy that comes with returning to a place and people I’ve come to love. I’d come back to Nepal to help Nat Geo Wild, Market Road Films and Billy Bush produce “Chasing Rhinos,” an ambitious hour-long documentary that was as challenging as anything I had ever done. We wanted to document the capture of a 2-ton greater one-horned rhino and place a tracking collar around its neck that would allow scientists to monitor it. Billy’s main objective was to tell the world about the challenges of saving rhinos and other endangered species in a place most people associate with towering mountains and snow leopards, not tropical grasslands and rhinos.

But first we had to get out of the Kathmandu Valley. During a chaotic airport scene, we filmed Billy’s arrival following 26 hours of flying from Los Angeles and then took him on a quick tour of Kathmandu’s bustling streets, temples and markets. All of us, Billy included, wanted the full immersion experience if we were to make a convincing film. This was as much about Billy being out of his element in a truly alien environment as it was about saving rhinos. We wanted viewers to feel the same anxieties and emotions that he did.

It didn’t take long. The uncomfortable look on his face as he viewed bodies being cremated on a dusty riverbank at Kathmandu’s oldest and most sacred Hindu temple said it all. But it was balanced by the look of calm and even joy as hermits called sadhus serenaded him and blessed with a vermillion tika on his forehead – a rite of passage for any newbie in Nepal.

Billy’s adventures on the ground

The next day we took a small plane to Southern Nepal’s Terai region and the real beginning of our adventure. Over the next few days Billy got a rare and sobering look at a “Wildlife Genocide Museum,” patrolled for poachers via foot, elephant and boat, launched an unmanned aerial vehicle to help keep track of rhinos and placed a thermometer in the business end of a sedated, armor-plated herbivore. Along the way, there was a lot of laughter, moments of high drama and a few tears shed as we saw the true impact of poaching on Nepal’s spectacular wildlife.

Watching Director Tony Gerber and his supremely talented team at work was an inspiration. The power trio of cameramen Ian Kerr and Aaron Haesler and soundman Simon Doucet produced breathtaking footage and sound. Whether it was a camera attached to the sedated rhino’s collar or complex camera mounts on vehicles and elephants, they each deserved an honorary engineering degree.

It was a long, hard year’s-worth of work to produce “Chasing Rhinos” and it was a labor of love. We all came away with a new appreciation for the massive challenges facing the wildlife protectors in Nepal. I’ll never forget how deeply affected everyone was by the scenes of carnage as we walked among countless items confiscated from poachers at Tikauli: skins, bones, teeth, horns, gall-bladders of endangered species, some with flesh still attached. Nobody was more deeply affected than Janet Han Vissering, Nat Geo Wild SVP and Executive Producer of Chasing Rhinos. But she kept the production on schedule despite a multitude of roadblocks and changes.

As sobering as that experience was, the good news is that rhinos are on the rebound in Nepal’s Chitwan National Park thanks to concerted conservation efforts. Fifty years ago, they numbered as few as 65 in Nepal. Today, poaching is still a problem due to the mistaken belief that rhino horn holds to cure everything from cancer to hangovers. But there is hope for the future. The Government of Nepal, WWF, The National Trust for Nature Conservation and other partners work with local communities to share tourist revenues and develop incentives for people to protect the wildlife and their habitats.

At the moment, rhino conservation is seen as a conservation success story in Nepal, but as Billy saw, this is no time to let down our guard. We all must remain eternally vigilant as demand for their horns from other Asian countries is on the increase.

Billy’s rhino will likely have a new home in the coming years. Plans are underway to translocate rhinos halfway across the country to set up new populations in other Nepali parks as a buffer against disease, poaching outbreaks and other threats. Since Billy’s rhino already has a tracking collar attached that makes him a prime candidate. Hopefully he’ll send a change of address postcard to L.A.

* A one-time donation of $10.00 will be added to your mobile phone bill or deducted from your prepaid balance. Donor must be age 18+ and all donations must be authorized by the account holder (e.g. parents). By texting YES, the user agrees to the terms and conditions. All charges are billed by and payable to your mobile service provider. Service is available on most carriers. Donations are collected for the benefit of WWF by the Mobile Giving Foundation and subject to the terms found at www.hmgf.org/t. Message & Data Rates May Apply. You can unsubscribe at any time by texting STOP to short code 20222; text HELP to 20222 for help. Privacy Policy