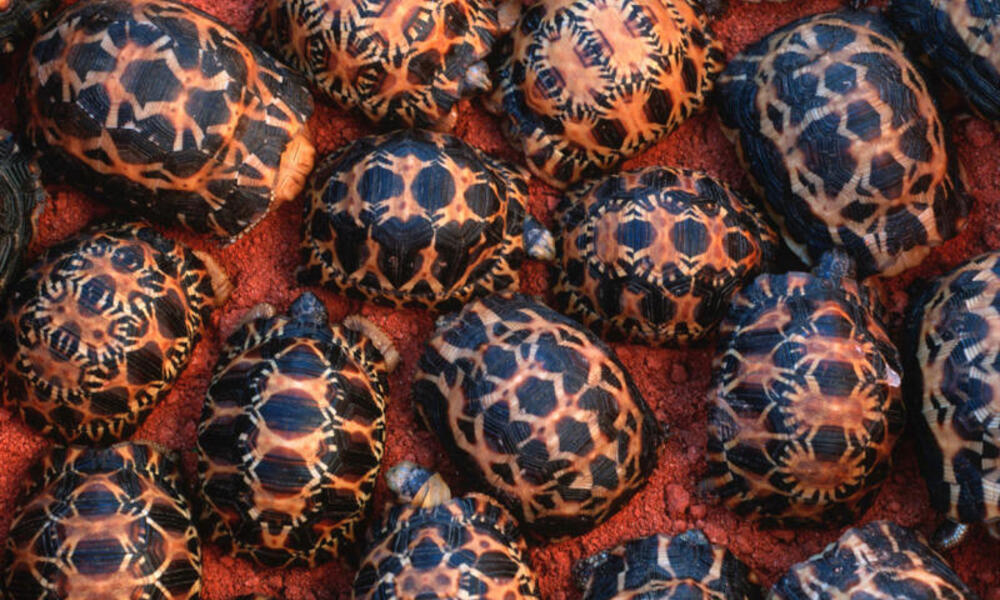 Down a dirt road, behind a plain concrete wall in one of Antananarivo’s non-descript neighborhoods, tortoise number 171 contentedly snacks on a lunch of tomatoes and grass in the shade of a small tree in a post-stamp sized yard. Number 171 and the other several hundred radiated and spider tortoises milling about the Turtle Survival Alliance’s (TSA) headquarters represent the front line in Madagascar’s battle to conserve its unique biodiversity and combat the illegal international trade in its most precious and endangered species.

Herilala Randriamahazo, Director of TSA’s operations in Madagascar and former EFN grantee, is reminded of the challenge he faces on an almost monthly basis, as calls come in from across the country notifying him of new confiscations—200 baby tortoises stuffed into two suitcases at the airport, 500 in a box in the back of a truck, 100 hidden in a dug-out canoe. “It used to be every 4-5 months that we got a call like that, but since the political crisis, it’s become much more common,” Randriamahazo says. Most shipments of tortoises are destined for the black market pet-trade in Asia.

Many of the tortoises that arrive at TSA headquarters are severely stressed and in poor health from their ordeal. Randriamahazo takes the youngest ones to his house where they are kept warm and carefully nurtured back to health. One recent group of 292 tortoises arrived with a mysterious illness. After weeks of correspondence with volunteer veterinarians from around the world, Randriamahazo, a biologist by training, discovered they had worms. After several weeks of medical care and the loss of several tortoises due to the illness, the healthy survivors were transferred to a larger facility in southern Madagascar dubbed “Turtle Village” (www.villagetortues.com) where they will stay until they can be released back into the wild.

The battle to save these tortoises is far from over. Reintroducing these tortoises back into their native habitat is anything but easy. A first attempt by Randriamahazo and a team of doctoral candidates in 2011 showed that many of the 159 juvenile tortoises traveled as much as 700 meters per day, often wandering back into prime poaching territory or beyond suitable habitat needed for survival. Much more research needs to be done before Randriamahazo and his team will be confident enough to try larger-scale reintroductions. For now, Randriamahazo and his team will monitor the tortoises’ movements using radio tracking devices and the help of local communities to develop future strategies to save these exquisite animals. If all goes well, current plans call for an additional 54 tortoises to be released in winter 2014.

When TSA began operations in Madagascar in 2010 it hadn’t planned on serving as the “go-to” organization for returning confiscated tortoises to the wild, but it quickly became an imperative as the uptick in confiscations resulted in large numbers of displaced tortoises with nowhere to go. Nevertheless, when Randriamahazo is not shuttling tortoises back and forth, he is working to implement a national conservation action plan that TSA helped pass in 2011 to address the declining population of these species in the wild. To be successful, Randriamahazo spends a substantial amount of time meeting and working with the local communities to protect these tortoises in their native habitat. This is where the community engagement training he received in 2002 as an EFN professional development grant recipient really pays off. The week-long seminar by the Conservation Breeding Specialist Group of IUCN gave Randriamahazo the skills and tools he needed to successfully engage these communities in the conservation work they are jointly undertaking today. “I learned how to effectively structure and facilitate community meetings so as to achieve real consensus and community buy-in to conservation activities. You can’t just show up and expect to get results, you have to keep coming back and build a dialogue that shows them that you’re there because you’re serious about helping them to conserve the sacred tortoise,” he says.

Randriamahazo is optimistic about the future of Madagascar’s tortoises. “People want to be responsible,” he says, undaunted by the challenges ahead. “I think there will come a time when people are concerned enough about the future of these iconic species to take action to save them.” To help nudge people along, Randriamahazo delights in handing out trendy, brightly-colored wrist bands with the simple words “arovo ty sokake” – protect the turtle.