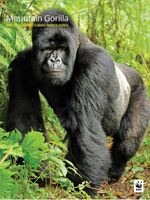 Mountain gorillas (Gorilla beringei beringei) possess a number of traits that contribute to their resilience to a changing climate: they are tolerant of a wide range of temperatures, are exposed to fairly high climate variability, have low freshwater requirements, and feed on a variety of abundant food.

However, a number of other traits make them vulnerable to a changing climate. Their population is very small and their range highly restricted. A limited dispersal ability (due to human settlements), coupled with a long generation time, a low reproductive rate, and low amounts of genetic variation, will limit the ability of the species to adapt to a changing climate.

Of high concern is the susceptibility of gorillas to disease. Diseases can be passed from humans to gorillas, and pose a high threat due to the widening distribution of disease under a changing climate, the frequent interaction between humans and gorillas, and the clustered distribution of the species. Other threats like habitat destruction, poaching, sociopolitical instability, commercial activities, and growing human population pressure, remain high and have the potential to increase due to the effects of climate stressors on humans and resulting changes in livelihoods.

Priorities for climate-informed conservation of mountain gorillas should include monitoring disease and maintaining and possibly increasing suitable habitat. It is also essential to create improved conditions for people to adapt to current and future changes in climate, and to continue to reduce threats such as instability in the east/ central African region.