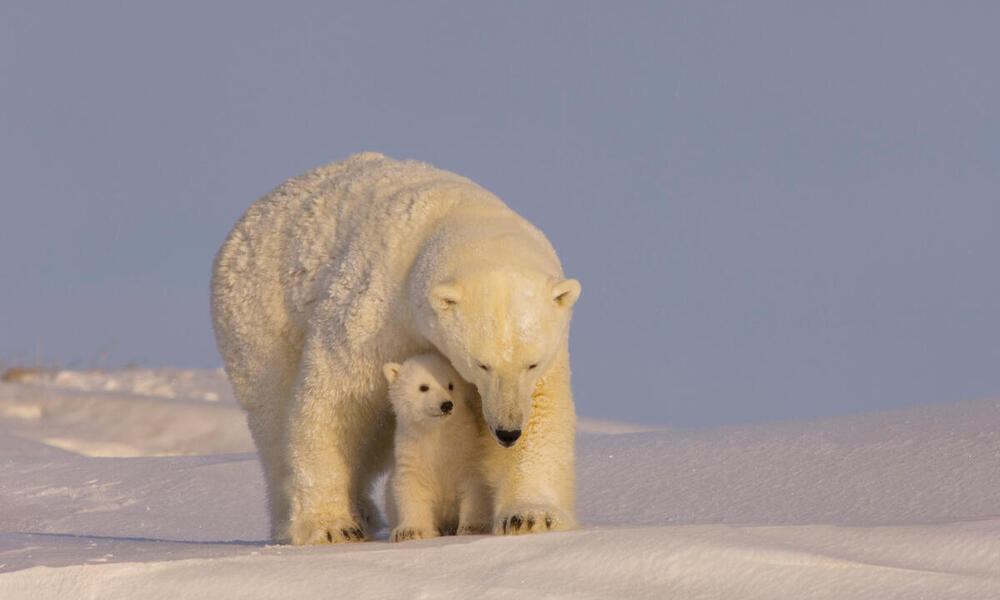 The climate is changing and the Earth is warming. These shifts are being felt all over the world, but especially in the Arctic, where sea ice and snow are disappearing. This will affect both people and wildlife, especially ice-dependent species like polar bears. If we don't do something about climate change, polar bear populations will be in serious decline by 2050. For this reason, WWF advocates for policies to fight climate change, engages with businesses to reduce their carbon emissions, works to stop deforestation (a major driver of climate change), and helps people and nature adapt to and prepare for long-term global challenges.

A serious consequence of shrinking sea ice habitat for polar bears is increased contact with Arctic coastal communities. As the ice recedes and the bears lose places to find food, they end up coming ashore in the summer and must wait months for the ice to reform. Hungry bears too often wander into communities, attracted to alternative sources of food (such as trash cans or dumpsters). This creates dangerous situations for both people and bears. Conflict with people is a serious threat to polar bears, which are already struggling from the impacts of climate change. But WWF is already focused on solutions.

What is Needed Now

First, WWF is protecting the last place projected to hold vital summer sea ice for polar bears. WWF is also pursuing local protection of Arctic areas known to be important onshore denning habitat for bears, and working at the policy level to keep threats such as offshore oil development out of critical polar bear habitat.

To minimize conflict between people and bears, we have developed non-lethal deterrence measures that enable people to protect themselves and their property from bears. The design of deterrence strategies to eliminate bear-human conflict must be tailored to the unique characteristics of each community, taking into account size, layout, and participation of residents.

WWF is planning a series of outreach visits to Arctic Alaska coastal communities that have been experiencing regular contact with polar bears on land. Our teams are developing low-tech, affordable solutions to minimize attractants for bears (e.g., improved containment of human trash) and increase use of deterrents to keep the bears away from people, including the use of polar bear patrols, guard dogs, cracker shells, flares, and electric fencing around camps and sled dog facilities. In addition, our educational initiatives with communities are absolutely critical to strengthening community safety and procedure, reducing risks, and finding ways for people to value polar bears through ecotourism and other incentives.

Based on initial visits in 2014, WWF is assessing options for the most effective approaches, and will launch pilot polar bear deterrence programs with individual communities in 2015.