Protecting Wildlife for a Healthy Planet

Thanks to your generous support as a Partner in Conservation, World Wildlife Fund is making important progress for vulnerable species around the world.

As you will read in this report, WWF is using every tool available to protect critically important species. Our programs help stop poachers, galvanize e-commerce companies to shut down online sales of illegal wildlife products, and decrease consumer demand for poached goods. On the ground, we work with conservation partners to reduce human-wildlife conflict and engage local communities to serve as conservation stewards, protecting the wildlife and habitat that surrounds them.

The advances we made over the past year happened because of you. Together, we are creating a brighter future for wildlife and for ourselves, for generations to come. 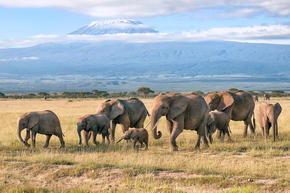 At the root of the wildlife poaching epidemic is an alarming rise in global demand for illegal wildlife products. Our efforts took a huge step forward when China officially closed domestic markets at the end of 2017. Hong Kong passed legislation to do the same by 2021 and Taiwan followed suit, targeting 2020. WWF made key contributions to these landmark policy commitments.

Now, more than a year after China’s historic announcement, we continue to make considerable progress in the fight to halt elephant poaching. Ivory purchasing in China has dropped significantly, except among diehard buyers and regular overseas travelers, our latest GlobeScan consumer research found. And, WWF campaigns to increase awareness of the new ban and change Chinese ivory buyers' behavior reached more than 250 million people, helped double consumer awareness of the ban, and measurably moved public sentiment in support of the ban.

Nine years ago, WWF and governments around the world joined forces on a goal to double the number of wild tigers—from an estimated low of 3,200 in 2010—to over 6,000 by 2022, the next Chinese year of the tiger.  This year, we celebrated significant wins for tiger conservation. In September 2018, Nepal announced that—according to its most recent survey—there are now an estimated 235 wild tigers in the country, nearly twice the number of tigers counted there in 2009. This is a truly remarkable show of progress for tiger conservation. If these trends continue, Nepal could become the first country to double its national tiger population since we set the ambitious goal in 2010.

In January 2018, Bhutan’s Royal Manas National Park announced that its tiger population had doubled, from ten tigers in 2010 to 22 today. Nepal and Bhutan are two of the 13 tiger range countries that have joined us in our goal to double the number of wild tigers, and these increases are both extraordinary and deeply important conservation milestones.

In Africa, we are protecting elephants through our support of the Kavango Zambezi Transfrontier Conservation Area (KAZA). Spanning Angola, Botswana, Namibia, Zambia, and Zimbabwe, KAZA contains approximately 40% of Africa’s elephant population and has emerged as one of the most important remaining strongholds for elephants in the world. In partnership with the KAZA Secretariat, regional governments, local communities, and other collaborators, WWF is helping to evaluate elephant habitat and landscape connectivity, launch a KAZA-wide aerial elephant census, and develop a KAZA elephant conservation strategy and action plan. In August 2018, WWF supported the first KAZA Elephant Conservation Strategy workshop, bringing together partners from all member states. The workshop was the official kick-off to developing a long-term plan that will guide sustainable management.

Once numbering more than 500,000, as few as 29,000 rhinos now roam Africa and Asia. Yet, with your help, rhino conservation has gained traction and populations are on the rebound. WWF supports the recovery of black, greater one-horned, Javan, and Sumatran rhinos by securing and protecting priority habitat and establishing new populations through translocations. Over the past two years, our teams successfully translocated 13 greater one-horned rhinos from the densely populated Chitwan National Park to Bardia and Suklaphanta National Parks in Nepal. We also equipped them with telemetric collars, which allow us to continue to monitor the health of the rhinos. Thanks to the collars, we know at least two translocated female rhinos have given birth following their move.

Polar bears are meant to spend much of their time roaming, hunting, and resting on the Arctic Ocean’s sea ice. But as the planet warms and the sea ice melts, many polar bears are swimming longer distances and coming ashore tired and hungry near towns where they can find food. The result is an increase in human-polar bear conflict, which threatens people and endangers this iconic species.