← Back to TNRC eCourse page 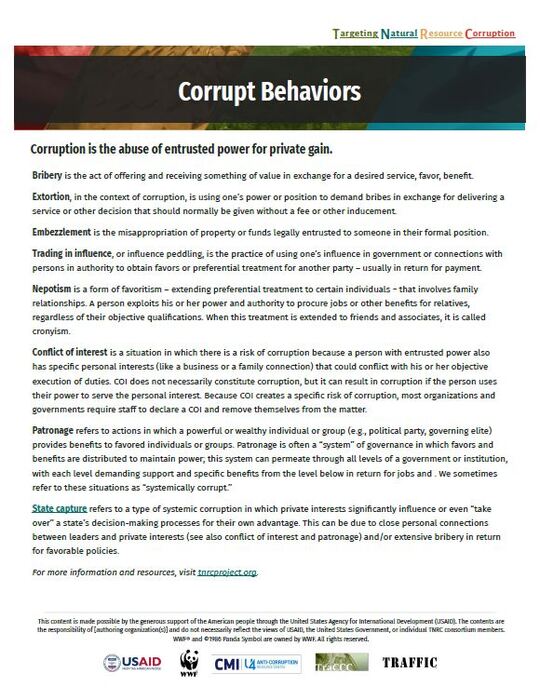 Corruption is the abuse of entrusted power for private gain

Bribery is the act of offering and receiving something of value in exchange for a desired service, favor, benefit.

Extortion, in the context of corruption, is using one’s power or position to demand bribes in exchange for delivering a service or other decision that should normally be given without a fee or other inducement.

Embezzlement is the misappropriation of property or funds legally entrusted to someone in their formal position.

Trading in influence, or influence peddling, is the practice of using one’s influence in government or connections with persons in authority to obtain favors or preferential treatment for another party – usually in return for payment.

Nepotism is a form of favoritism - extending preferential treatment to certain individuals - that involves family relationships. A person exploits his or her power and authority to procure jobs or other benefits for relatives, regardless of their objective qualifications. When this treatment is extended to friends and associates, it is called cronyism.

Conflict of interest is a situation in which there is a risk of corruption because a person with entrusted power also has specific personal interests (like a business or a family connection) that could conflict with his or her objective execution of duties. COI does not necessarily constitute corruption, but it can result in corruption if the person uses their power to serve a personal interest. Because COI creates a specific risk of corruption, most organizations and governments require staff to declare a COI and remove themselves from the matter.

Patronage refers to actions in which a powerful or wealthy individual or group (e.g., political party, governing elite) provides benefits to favored individuals or groups. Patronage is often a “system” of governance in which favors and benefits are distributed to maintain power; this system can permeate through all levels of a government or institution, with each level demanding support and specific benefits from the level below in return for jobs and we sometimes refer to these situations as “systemically corrupt.”

State capture refers to a type of systemic corruption in which private interests significantly influence or even “take over” a state’s decision-making processes for their own advantage. This can be due to close personal connections between leaders and private interests (see also conflict of interest and patronage) and/or extensive bribery in return for favorable policies.