The Greater Mekong region holds irreplaceable riches—ranging from rare wildlife in spectacular natural landscapes to communities with distinct cultural heritages. The vast region spans six countries: China, Myanmar, Lao PDR, Thailand, Cambodia and Vietnam. Its 200 million acres—the combined size of Texas and Arkansas—contain some of the most biologically diverse habitats in the world.

This is the ‘rice bowl’ of Asia and at its heart lays the Mekong River. Winding almost 3,000 miles from the Tibetan plateau down to the South China Sea, the Mekong River boasts the world's largest inland fishery. It accounts for up to 25 percent of the global freshwater catch and provides livelihoods for tens of millions of people. It is second only to the Amazon River in terms of fish biodiversity. At least 1,200 freshwater species swim the waters of this mighty river including the last remaining populations of the Irrawaddy dolphin, giant freshwater stingray which can weigh up to 1,300 pounds, and the Mekong giant catfish. 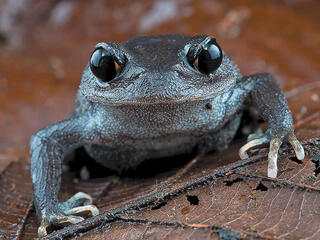 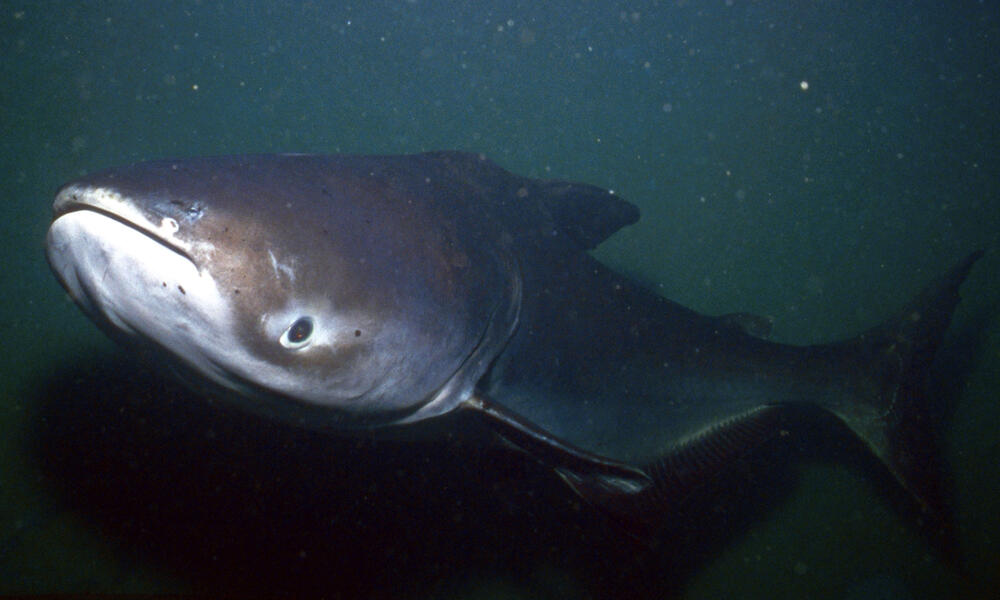 The Mekong giant catfish can weigh up to 770 pounds and is the third largest freshwater fish on the planet.

The Greater Mekong has no fewer than 20,000 species of plants, 1,200 bird species, 800 species of reptiles and amphibians, and 430 mammal species. Over 1300 new species have been catalogued since 1997. Forest landscapes—spanning an area roughly the size of France—are the largest combined tiger habitat in the world and are priority areas for WWF’s tiger conservation work. 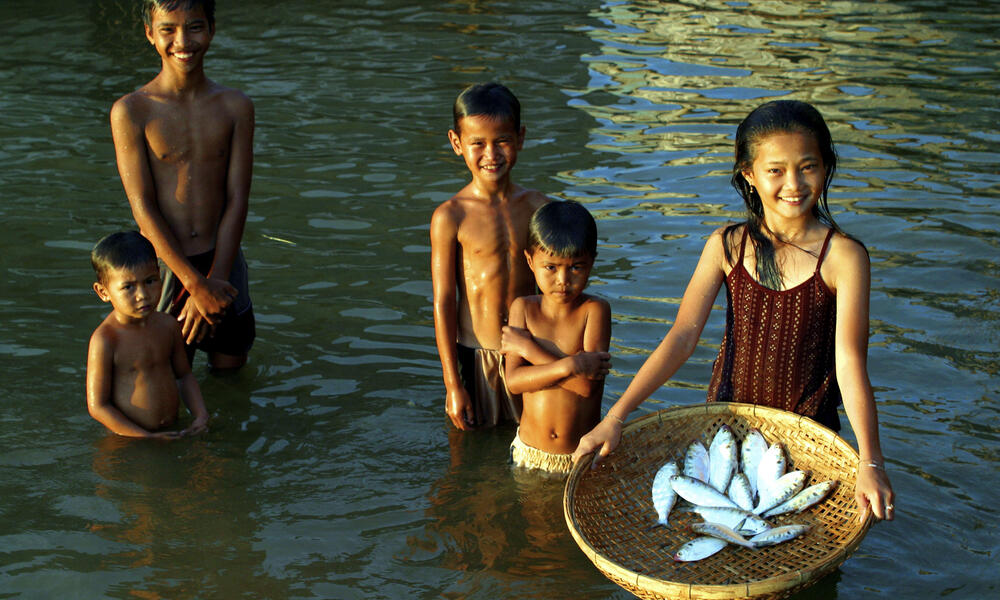 People have lived in the Greater Mekong region for more than 4,000 years. Today, these lands are home to more than 300 million people from nearly 100 distinct ethnic groups. Around 80 percent of the population depends on healthy natural systems such as rivers, forests and wetlands for food security, livelihoods and culture. Few places on Earth demonstrate so dramatically the fundamental link between human and ecosystem well being. This is why people are central to our conservation strategies.

The Greater Annamite Mountains, lying east of the Mekong River, provide one of the last intact natural protections from climate change. Home to around 30 million people from 70 ethnic groups, the natural ecosystems within the Annamites provide communities with food and water, natural resources to build from or trade, and an environment in which to practice centuries old customs. For generations, people such as the Ruc and Khamu Rok in the upland areas have used forest resources sustainably and according to traditional custom.

Six different ethnic groups inhabit Kayah-Karen Tenasserim, the highlands that span the mountainous border between Thailand and Myanmar. The Akha, Hmong, Lu Mien, Karen, Lisu and Lahu each display traditions, beliefs, and dress codes that can be further subdivided based on religion and dialect. Traditionally migratory swidden farmers, they have seen their traditional dynamic farming systems gradually disappear leading to a sedentary agricultural lifestyle. 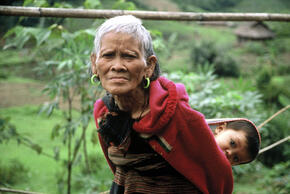 In the Dry Forest of Cambodia and Thailand, over 80% of the population is from minority ethnic groups such as the Jarai, Kraol, Phnong, Ro Oung, Stieng, Su, Oey, Kreung, and Tampuan, as well as Cham, Chinese, Khmer, Lao, and Vietnamese. All of these groups have distinct customs, traditions, languages, and beliefs. Each interacts with the environment in various ways, and utilizes a variety of natural resources. The Phnong, for example, are the largest group and are heavily dependent on forest 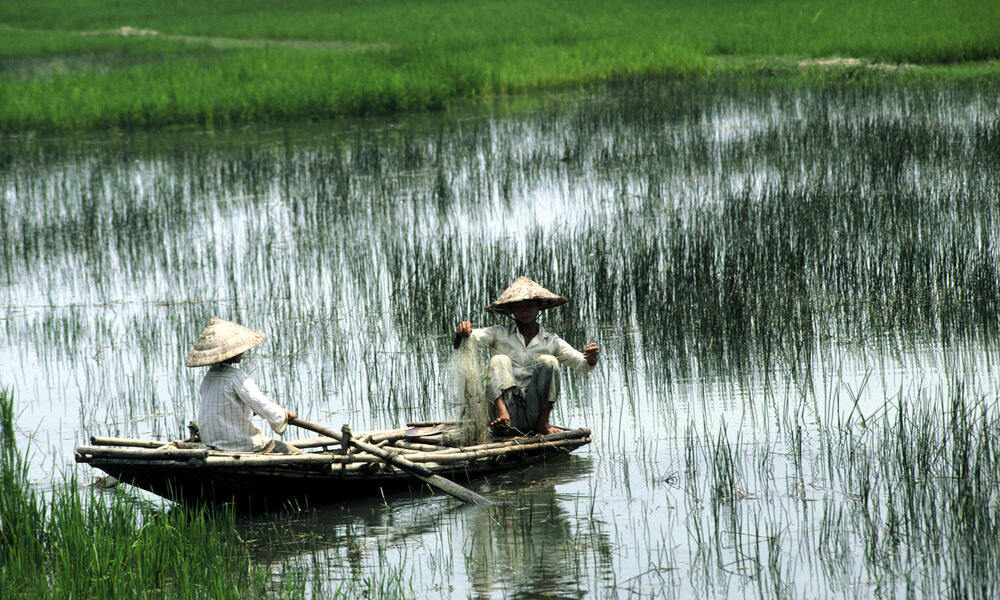 Women fishing in a rice paddy in a time of food scarcity, Northern Vietnam.

Areas that were once remote are transforming fast in the Greater Mekong region. Populations are booming and the demand for energy and natural resources is reaching new heights. Countries are rolling out economic plans of unprecedented scale that include new hydropower dams, roads and free flows of goods and people across national borders. These developments are necessary to improve the lives of millions of people in the region, but if they are not planned sustainably it could also create serious and irreversible problems—particularly now in the face of climate change. WWF believes more information is necessary to fully measure the economic and environmental implications of mainstream dam construction. 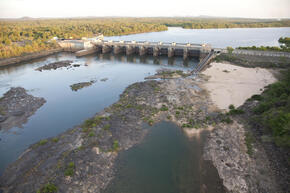 The Greater Mekong is one of the most vulnerable places on earth to the impacts of climate change, which compounds existing and projected threats. It impacts the region’s people, biodiversity and natural resources with cascading effects. Water scarcity, for example, leads to reduced agricultural productivity, leading to food scarcity, unemployment and poverty. Across the region, temperatures have risen and continue to rise. Sea level rise is threatening the region’s coastal communities. Degradation of ecosystems from climate change will decrease their productivity and capacity to provide livelihoods for people of the Greater Mekong.

Illegal wildlife trade results in the loss of precious species and also severely alters the ecosystems in which species and people live. In the Greater Mekong, the region’s biodiversity is threatened to the point where the survival of species like tigers and elephants hangs in the balance. In 2011, the last Javan rhino in Vietnam was declared extinct. Poaching was the likely cause of the death, as it was found with a bullet in its leg and had its horn removed. A false belief that rhino horn cures cancer has skyrocketed demand in Vietnam, where its costs as much as gold.

An estimated 3,700–4,500 tonnes of wildlife products (excluding birds and insects) are traded and consumed every year in Vietnam alone. Within Southeast Asia, Vietnam supplies international markets, particularly China, with a variety of plants and animals. It is also a major illegal wildlife trade conduit. 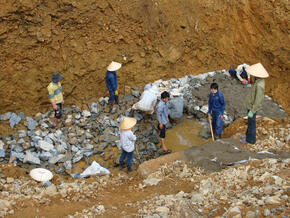 Forest cover in the Greater Mekong has fallen from over 55% in the early 1970s to 34% today. Population growth, poor land-use planning and economic policies have led to deforestation and biodiversity loss across the Greater Mekong region. Loss of forest habitat and biodiversity weakens the region's ability to adapt to the impacts of climate change and puts communities at risk. Recent expansion in the scale and intensity of these agricultural activities has come with significant costs to the environment. In Cambodia and Laos, a surge of land concessions for agricultural plantations has added pressure on both natural ecosystems and the rural communities that depend upon them.

Additionally—because agriculture is often linked to the construction of infrastructure projects like roads, bridges, and dams—it leads to significant secondary impacts on the environment through forest degradation, habitat fragmentation and increased poaching. 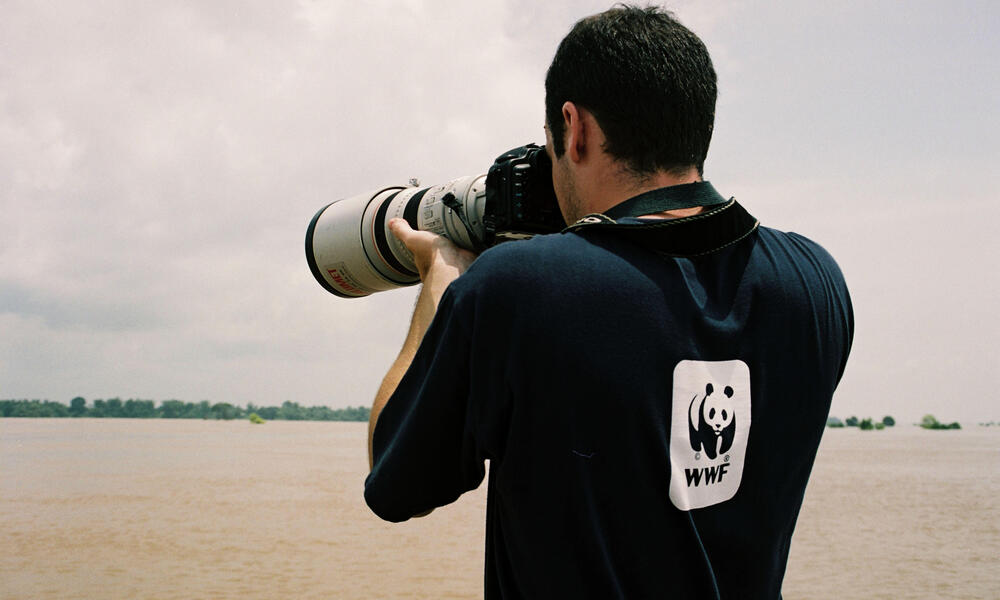 With three of the most pristine large rivers and some of the most extensive intact forest in the region, Myanmar is one of the most biologically diverse and ecologically productive nations on Earth. Its rich natural assets form the foundation for Myanmar’s long-term sustainable development. In recent decades Myanmar has witnessed its neighbors over-exploit their natural wealth, from deforestation to illegal wildlife trade. Now as the country opens up politically and economically, it’s feeling many of the same pressures faced by the rest of the Greater Mekong region.

In 2014, WWF is formally opening an office in Myanmar to ensure its economic growth continues to sustain the lives of people and wildlife. WWF’s aim is to support the country’s sustainable development ambitions with a focus on spatial planning, biodiversity and ecosystem services protection and sustainable livelihoods.

WWF’s Russell E. Train Education for Nature Program (EFN) is offering the best and brightest future conservation leaders from Myanmar the opportunity to pursue graduate-level study anywhere in the world with the goal of advancing conservation. Learn more. 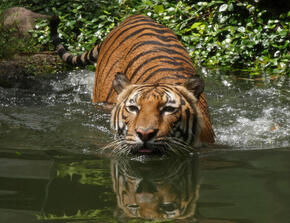 WWF is the only organization working on the Mekong River from source to sea. We support a ten-year delay in the approval of lower Mekong river mainstream dams to ensure a comprehensive understanding of all the impacts of their construction and operation. WWF develops tools to help assess which tributaries can be developed for hydropower without compromising the ecological integrity of the lower Mekong basin. For example, a key project we are working on uses the best available science to map the entire river system so that we can advise decision makers where not to put a dam. A poorly placed dam will have a domino effect, impacting fish migration and spawning as well as sediment deposition, which in turn affects food security in the region.

Anticipated impacts from climate change create an urgent need to address infrastructure development in the region and create climate-proof conservation landscapes. WWF carries out climate change vulnerability assessments in priority landscapes—looking at sectors that deal with food security, migration, disaster relief, as well as more traditional environmental areas. We help to build a region-wide climate change resilient network for protected areas and corridors. WWF is one of the few international non-governmental organizations that works directly with local communities to restore wetlands and coastal mangroves, prime aquaculture and agricultural lands. These projects will help build resilience to climate change impacts like sea-level rise, and extreme flooding and drought events. 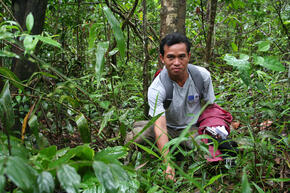 Increased global demand for wood products has spurred an aggressive timber industry that operates largely uncontrolled. WWF collaborates with companies, communities and governments to encourage responsible forestry practices that lead to sustainable certification standards. This approach will enhance local economies, integrate watershed management, conserve biodiversity, and provide a long-term solution on a global scale. At a local level, WWF integrates landscape and land use planning into existing development so that high conservation value forests are protected. We also promote community forestry and community based natural resource management. In Laos, Cambodia and Vietnam, villages rely heavily on the rattan trade (roughly 600 species of palms). But rattan has also been depleted from forests at an unnatural rate. In 2009, WWF launched the “Sustainable Rattan Project” to strengthen sustainability along the rattan supply chain in the region.

The construction of economic corridors—essentially large infrastructure and energy blocks—is accelerating transboundary trade and commerce. At the same time, this construction threatens the region’s biodiversity and local livelihoods with long-term consequences that are just becoming apparent. WWF leads a collaborative effort with the Asian Development Bank and other conservation partners to promote sustainable approaches to infrastructure development that protect vital habitat corridors for wildlife and mitigate secondary impacts, such as deforestation and illegal wildlife trade. 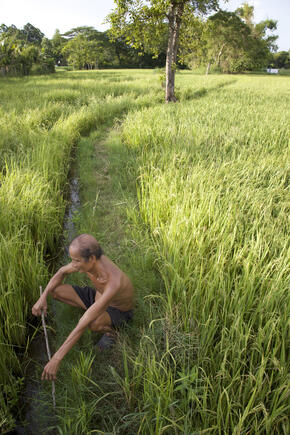 The region’s transition from subsistence farming to commercial agriculture presents one of the most serious threats to biodiversity. Today, agricultural enterprises convert forest habitats into farming land for crops such as sugar, rice and rubber. With demand growing for these thirsty crops, WWF works with local communities and industry to encourage responsible agricultural practices that minimize habitat loss and reduce impacts on water use and quality. In 2007, WWF and The Coca-Cola Company launched a multi-year partnership to conserve and protect freshwater resources. The $20 million commitment from The Coca-Cola Company to WWF helps to conserve seven of the world's most important freshwater river basins, including the Mekong.