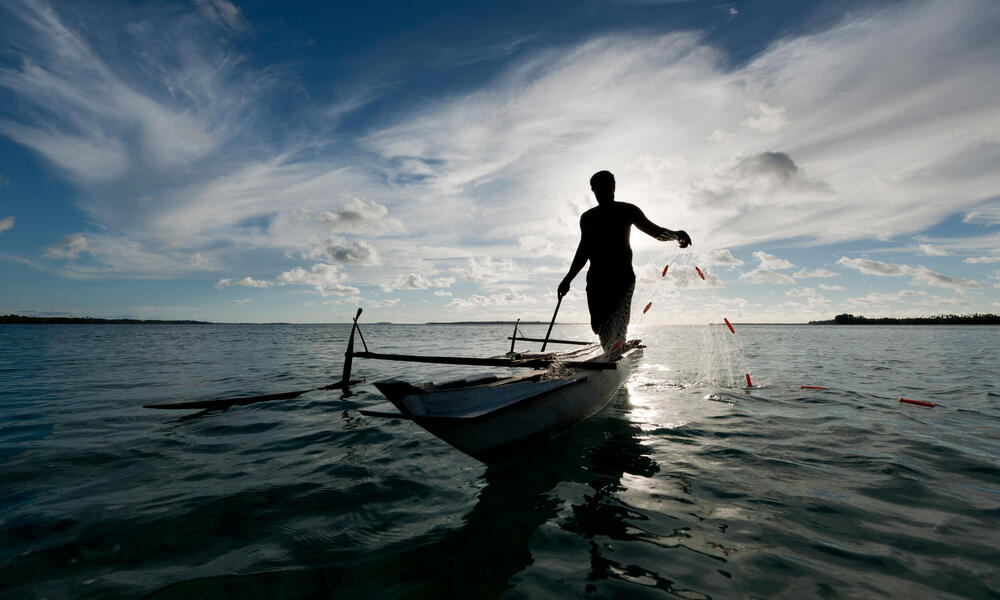 There are several methods vessels use to catch tuna, each with its own advantages and negative ecological impact. Most of Pakistan’s tuna fleet uses gillnets—miles-long nets suspended vertically from the surface of the water, like a curtain, that allows for the head of a tuna to pass through the mesh but entangles the gills. Pakistan’s tuna fleet numbers around 700 vessels, which set thousands of miles of nets in the northern Indian Ocean each day.

The unregulated use of gillnets poses a substantial threat to cetaceans—whales, dolphins, and porpoises—as well as turtles and sharks. These non-target species can become entangled in gillnets and are caught as bycatch. Although data is limited, WWF estimates that prior to 2012, around 40,000 dolphins and sea turtles died as bycatch annually in Pakistan’s gillnet fishery alone.

As part of the Common Oceans ABNJ Tuna Project—an initiative funded by the Global Environmental Facility (GEF) and implemented by the Food and Agriculture Association of the United Nations (FAO)—WWF is working onboard with vessel crews to improve scientific reporting and adjust gillnetting practices to monitor and reduce bycatch.

This project demonstrated that vessel crews—uniquely positioned at the beginning of the supply chain—can be effective agents to develop best practice improvements and successfully implement them broadly.

The Project
WWF is encouraging Pakistan’s national fleet of gillnet vessels to modify how crews fish with this gear to mitigate the negative ecological impact. The modification is simple and inexpensive: crew members just place their gillnets approximately 6 feet below the water’s surface to reduce entanglement rates of bycatch species.

Additionally, more than 100 skippers have been trained on how to correctly identify different cetacean, turtle, shark, and ray species, and then how to safely release them back into the ocean. The crews are also equipped to record and report data on their tuna catch and bycatch species entanglement rates.

WWF is partnered with scientists from Florida National University to process this data and build the evidence base for effective fishing and bycatch mitigation policy setting in the region.

The Results
Pilot tests revealed that by placing gillnets deeper underwater, the entanglement rate of cetaceans decreased by 80-85% and vessels reported a 30-40% increase in their catch of tuna with each haul.

Improved data collection and bycatch mitigation actions mean that Pakistan can now comply with resolutions established under the Indian Ocean Tuna Commission (IOTC), the tuna management and conservation organization for the region. The activities under the project have improved Pakistan’s compliance with IOTC decisions from 6% in 2015 to 55% in 2018.

In late 2019, for the first time ever, the Government of Pakistan hosted the IOTC’s annual scientific committee meeting, as well as another meeting on data collection and statistics. This leadership is a signal of the country’s stated commitment to be a collaborative and engaged member of the IOTC moving forward.

Next Steps
The success of this project to advance a crew-based observer program has received recognition in the region, and there are plans by the Government of Sri Lanka to replicate the program for its own national tuna longline fleets.

With the lessons learned from this program, WWF is supporting the Government of Pakistan to develop a national policy on deep-sea fishing that includes limiting gillnet length to approximately one mile and banning bottom trawling, the most destructive fishing method used in the region.

Eventually, vessels may install electronic monitoring systems (EMS) onboard to further improve data collection on catch and bycatch in the tuna gillnet fishery, as EMS has stronger monitoring and surveillance capabilities.

To learn more about this project and cetacean conservation work in the northern Indian Ocean, tune into WWF’s Umair Shahid’s interview with the Marine Mammal Science Podcast.