An Investigation into the Trade of Nautilus

Often referred to as a ‘living fossil’, the ancestors of the modern nautilus first appeared roughly 500 million years ago. This mobile cephalopod—typically associated with coral reefs—has a large, chambered shell and adjusts its buoyancy by changing the amounts of gas inside its chambers. Slow to grow and reproduce, with a lifespan exceeding 20 years, nautilus are vulnerable to even low levels of exploitation. This study by TRAFFIC and WWF, with support from the US Fish and Wildlife Service and US NOAA Fisheries, finds that trade may be a threat to the conservation of the chambered nautilus. The report calls on source and destination countries to take actions to reform harvest and trade controls to prevent the overexploitation and illegal harvest and sale of nautilus. 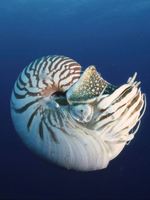