Cuando State of the Basin Report

The Cuando River Basin is one of the thirteen Sub basins of the Zambezi Watercourse. The Cuando River provides critical water resources to the heart of the Kavango-Zambezi Transfrontier Conservation Area (KAZA TFCA), the largest terrestrial transfrontier conservation area on the planet. The KAZA region, where Angola, Namibia, Botswana, Zambia, and Zimbabwe converge is home to 2.5 million people, shelters half of Africa’s remaining savannah elephant population, and is critical for many other important wildlife species. The Cuando Basin has remained largely undeveloped, with a population of less than 200,000 people, but in recent years is seeing increasing pressure due to climate changes and unsustainable use of natural resources such as water, forests and land.

Without a shared transboundary vision that balances the needs of people and the environment, these pressures could result in negative impacts to the basin and the people who live within it. At the core of such a shared vision is inclusive and sustainable integrated water resource management (IWRM) and increased water security for the benefit of people and ecosystems in the Cuando River Basin, and downstream in the Zambezi Watercourse. Attaining the shared vision in turn requires effective management of water resources, transboundary water governance forums and innovative partnerships.

The State of the Cuando River Basin Report is part of the outputs of a larger project entitled “Transboundary Governance of the Cuando; Protecting
the Heart of Southern Africa” funded by the United States Department of State (USDOS) and supported by the World Wildlife Fund for Nature (WWF); the Zambezi Watercourse Commission (ZAMCOM); and the Kavango-Zambezi Transfrontier Conservation Area (KAZA) Secretariat. 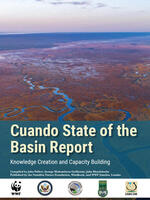