The forests of the Russian Far East—known as the “Ussuri Taiga”—are being pushed to the brink of destruction due to pervasive, large-scale illegal logging, largely to supply Chinese furniture and flooring manufacturers, many of whom in turn export to the U.S. and Europe. This widespread timber theft is driving the endangered Amur tiger—which calls these forests home—closer to extinction.

For instance, WWF analysis of Russian customs data revealed that in 2010, the volume of Mongolian oak logged for export exceeded the volume authorized for logging by 200 percent—meaning that at least half of the oak being exported across the border to China was stolen. Further analysis of export data showed that 2010 was a mild year—in 2007 and 2008 the oak harvest was four times as large. And the unavoidable truth is
that some of this wood reaches U.S. and European markets.

As one of the largest importers of flooring and furniture from China, the U.S. can play an important role in helping address this crisis. In 2008, Congress amended the Lacey Act, incentivizing U.S. companies to conduct rigorous due diligence and exclude criminal suppliers by imposing legal liability for the importation of illegally sourced wood products.

The Lacey Act is having an impact, but resolving the pervasive illegal logging crisis in Russia’s last tiger forests requires action at all levels. Governments, companies and consumers can all play a role in helping combat illegal logging and saving this crucial tiger habitat. 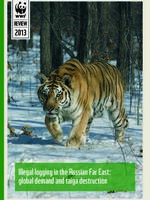