Over the last decade Brazil has assumed a growing role on the world stage, as a major economy and as a leader in the developing world. Economic growth has been strong, and reductions in poverty substantial. The country's extensive natural resources have supported the country's rapid growth, but are also important to global sustainability. Brazil is a world leader in agriculture and clean energy, yet degradation of Brazil's ecosystems has major implications for global agricultural production and climate change. Cooperation between the U.S and Brazil on clean energy and conservation offers potential for advancing sustainability and strengthening the U.S.-Brazil relationship.

Environment
Brazil has vast land, water, mineral and biodiversity resources. Over 60% of the Amazon rainforest, globally valuable both for biodiversity and climate change mitigation, lies within Brazil's borders. Forest protection efforts have brought deforestation rates down in recent years. Brazil is also home to other ecosystems critical to global food and energy production and sustainability. The Cerrado, a natural grassland, has become Brazil's agricultural powerhouse in recent decades, as result of improved techniques and crop varieties. The region now generates 70% of Brazil's farm output, and is driving a globally important increase in soybean production. The country's energy matrix is one of the cleanest in the world, with renewable sources, notably hydropower and biofuels, supplying over 45% of Brazil's energy needs.
Brazil is now the world’s eighth largest economy, with its economic growth based on its extensive natural resource wealth. Agricultural production doubled between 1990 and 2005, and Brazil now ranks among the world’s five largest agricultural producers and exporters. Other natural resources are also critical exports: iron ore and oil, along with soybeans, account for 30% of Brazil's exports. Investment in the coming years will likely be concentrated in energy, transport and agribusiness, with the energy sector expecting the largest share.

Brazil's development model has had an enormous impact on the environment, and the conflict between economic growth and environmental sustainability is becoming increasingly pronounced. Large hydroelectric projects, which account for 80% of the country's energy use, are at capacity, pointing to a need for new energy sources. At the same time, rising food prices have led to an expansion in agricultural production, often achieved through illegal land acquisition rather than increases in efficiency. With a weak trade balance and dependence on a few exports, policies aimed at environmental sustainability often arouse serious controversy. Brazil has projected itself as a champion of sustainability and agent for sustainable development on the international stage. Yet, while Brazil has promoted this image in multilateral forums and meetings on the environment, at home the country has had difficulty overcoming the conflicts between its pragmatic, resource-based development model and environmental protection. Such has been the case with the recent battle over the revised Forest Code, which pitted the agricultural sector against environmentalists.

The principal economic impacts of environmental change in Brazil will be felt through increased temperatures and water scarcity that will affect the levels of agricultural production and carbon storage. While deforestation has slowed, cattle ranching and agriculture continue to put pressure on the Amazon region. Deforestation contributes to local and global climate change, and recent severe droughts in the region have affected agricultural production and other economic activities. Continued degradation may reduce rain across the Amazon Basin by up to a fifth by the year 2050. One study indicated that even moderate temperature increases would cause significant damage to a range of Brazilian agricultural products—including rice, coffee, beans, manioc, maize and soybeans, with declines of perhaps 25% in soybeans--posing a significant threat to Brazil's prosperity and contribution to the global food supply.

Implications for the U.S.
The U.S. has an interest in protecting Brazil's ecosystems both for climate change mitigation and biodiversity conservation; the U.S. also has an interest in maintaining and increasing Brazil’s agricultural output to ensure global food security. As one of the world’s agricultural powerhouses, any substantial decline in Brazilian production will reduce the world’s food supply and lead to rising food prices. Of even greater concern, drying of the Amazon could cause regional and even global changes in rainfall patterns, with even greater impacts on food security. Beyond Brazil's borders, evaporation and condensation over the Amazon are important drivers of the global atmosphere and strongly affect precipitation patterns both in South America and the northern hemisphere. Drying of the Amazon will also lead to a loss of forest biomass and stored carbon, and provoke large-scale extinctions. The value of this loss cannot be calculated.

Brazil has already undertaken some important climate initiatives both in terms of reducing deforestation and in terms of developing the technologies, institutions and markets needed to promote sustainable energy sources. One of the world's major consumers of energy, Brazil has made notable advances in production and commercialization of clean energy. The U.S. would do well to support these initiatives at a broader scale, and foster Brazil's international environmental leadership role where it can make a global contribution to sustainability rooted on its own successful experiences.

Brazil is not an easy player for the U.S. to deal with in the international arena, and the two countries often find themselves in opposition in the multilateral organizations. As a developing power and emergent market, with leadership ambitions and strong views on sovereignty, Brazil has had easier relations with the Latin American countries and the other large, middle-income countries. However, Brazil's international stance has evolved in recent years, moving towards greater integration.

Recommendations
The emergence of Brazil as a regional leader and its stable and growing economy could open new opportunities for strategic partnership between the U.S. and Brazil. Both countries have a strong interest in clean energy and sustainable development and have embarked on some cooperative efforts that could provide the basis for greater collaborative engagement.

A broad program for cooperation on energy issues has been initiated, known as the Brazil-U.S. Strategic Energy Dialogue. Biofuels offer a promising area for strategic cooperation, perhaps starting with the shared interest in promoting the development of an international market. Such cooperation could support the development of international standards for biofuels and of programs with the international development banks to support initiatives in biofuel production and commercialization. Brazil has already initiated a biofuels programs in some African countries. These initiatives could be complemented or expanded with support from the U.S. government.

In the area of ecosystem conservation, collaboration could provide a boost to remote monitoring technologies and equipment, and training and financial support for the environmental agencies. Environmental collaboration could enhance global food security and reduce the impact of climate change. As with clean energy, cooperation between the U.S. and Brazil could support multilateral efforts. Brazil's experience in monitoring and controlling deforestation could engender a global initiative to address this problem in other tropical countries. Given Brazil’s political role among developing countries, not only in Africa but also in South America and Middle East, especially in the area of agricultural research and development, it could be a valuable ally for the U.S. with other developing countries. 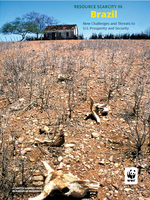