The Democratic Republic of the Congo (DRC) has an enormous wealth of natural resources that the world craves, including minerals, forests, agricultural land and oil. But the DRC remains one of the poorest countries in the world, ranking near last on the U.N. Human Development Index. Years of war, institutionalized corruption and mismanagement, along with continuing violence in the eastern provinces, have trapped the country in a vicious circle of poor governance. Poor natural resource management handicaps efforts to rebuild the state and, because the state is weak, it cannot regain authority over its natural capital. Regional insecurity, disruption of commodity supplies, and loss of global environmental goods make the management of DRC's resources a global concern.

Implications for the U.S.
As a strong proponent of human rights and the rule of law, the U.S. finds the continuing crisis in Congo a diplomatic embarrassment. Diplomatic efforts have criticized DRC's human rights record and attempted to mediate between the government and rebel groups. The U.S. has also provided military training and sent special forces, but with little impact.

Whether Congo is able to develop a functional state and govern its immense natural resource wealth is relevant to the U.S. beyond the moral issues of poverty and ongoing violence. Congo matters because of its potential contribution to protecting the global commons, because of the value of its natural resources, and because of the role that mismanagement and corruption play in fueling crime and conflict not only within its borders but beyond. However, the U.S. must recognize that it has very limited influence over Congolese affairs. With growing global demand for the DRC's natural resources, Congolese authorities do not have to acquiesce to U.S. opinions about good governance.

Protection of Congo's tropical forests is vital in the fight against global climate change and biodiversity loss. International pressure to halt deforestation has brought attention and a modicum of financial support for sustainable forest management. The U.S. Presidential Initiative against Illegal Logging is designed to exclude illegal timber from U.S. markets. However, the impact of such initiatives is threatened by the lack of governance and by large timber importers that ignore sustainability.

The potential disruption of mineral commodity markets is another concern. However, mineral supplies to the U.S. from Congo are relatively small and, despite the country's troubled past, the supply of minerals has never been significantly disrupted. Congo's participation in global oil markets is also limited.

Of greater concern is the role mineral and wildlife resources play in perpetuating violence. Local militant organizations threaten to destabilize U.S. allies and trading partners throughout the region. Moreover, the profits generated from natural resources are now believed to finance international terrorist organizations. And there is the risk that Congo’s valuable minerals, notably uranium, could get into the wrong hands. To help break the link between natural resources and violence, the U.S. enacted the Dodd Frank Act, requiring U.S. companies to prove that the minerals they buy are not fueling bloodshed. Whether this legislation will help end violence in the region by depriving militia of profits, or simply drive out investors who could bring economic development, is debated.

Recommendations
Breaking out of the current vicious cycle is a chicken-and-egg problem. Does governance need to be improved before private sector investment and economic development can take place? Or is economic growth needed first to support stronger political institutions and civic responsibility? Without trying to resolve this debate, it is clear that governance and state-building initiatives need to be embedded in improved natural resource management. Policy-makers should begin by carefully tracking trends and making vital policy linkages among the agriculture, forestry, mining, and energy sectors. For example, sound forestry policy will require improvements in agricultural production and energy provision.

The U.S. government has devoted funding and diplomatic energies to the struggle to save the forests of the Congo Basin. This work should continue, but with recognition that improved forest management is primarily a political, social and cultural problem rather than a technical challenge. The role of international support for Congolese environmental management is crucial. Foreign support (ranging from the World Bank to small NGOs) has been crucial in making linkages between poverty reduction, economic development and good governance on the one hand, and natural resource management on the other. 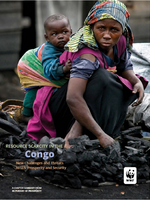