The countries of coastal East Africa--Kenya, Tanzania, and Mozambique—face some of the highest rates of poverty in the world, as well as chronic food and water insecurity. The region’s rich natural resource base, if used sustainably, could make a significant contribution to greater economic growth and development. However, overfishing, deforestation, and illicit wildlife trafficking are slowing growth and impeding U.S. efforts to provide development assistance and forestall regional instability.

Environment
Coastal East Africa is endowed with some of the most biodiverse ecosystems in the world, known not only for its remarkable wildlife, including much of Africa's elephant population, but also for its rich marine resources. Together Kenya, Mozambique and Tanzania contain Africa’s largest intact wilderness and account for 4,600 kilometers of coastline. Throughout the region, rapid population growth, combined with real development needs and aspirations, and growing international markets for natural resource products are putting pressure on these already scarce resources.

The fisheries of the coastal waters in the Indian Ocean are one of the region’s key natural resources. More than 70 percent of Indian Ocean tuna—worth $2 billion to $3 billion per year—is caught in the coastal East Africa region. Over the past ten years, demand for the region’s fish and the growing presence of foreign commercial fleets have resulted in trade that is not only unsustainable but, in many instances, illegal. Unsustainable and illegal harvesting practices result in significant revenue loss for the region. Tanzania alone loses an estimated $200 million to illegal harvesting. Moreover, wasteful and destructive fishing techniques damage the ocean environment, including coral ecosystems that serve as breeding grounds for fish populations and support international tourism. Unsustainable extraction by foreign and domestic fleets threatens the livelihoods of the region’s coastal communities, and opens the door for larger marine security problems.

More than 20 million people live in and around the region's coastal forests, relying heavily on those forests for their food and freshwater supply. However, poorly regulated and illegal timber extraction, driven by local demand for energy, expansion of commercial agriculture, and rising demand from Asia, is driving high deforestation rates. Tanzanian forests are being cleared at a rate of 400,000 hectares per year, reflecting the reliance on wood fuels for cooking, about 70 percent. In Mozambique, fuelwood and charcoal account for over 80 percent of energy use.

Food and water insecurity are common, with 80 percent the population dependent on subsistence agriculture in this largely semi-arid region. In Tanzania alone, more than 40 percent of the population is believed to live in chronic food-deficit areas. Small farmers in East Africa are highly dependent on local ecosystem products, such as wood for cooking and construction, fish and shellfish, and wild plant foods and medicines, as well as the ecosystem services, particularly water flow, that are provided by the region’s forests. When forests are degraded, the risk of water scarcity is exacerbated and other essential products are lost.

A recent upsurge in illicit trafficking and poaching of wildlife also impedes the region’s development efforts and threatens stability. Demand for wildlife products such as ivory is strongly linked to the growing markets in East Asia and China. In 2009–2011, Tanzania was the world’s leading trafficker of illegal ivory. Not only does the illegal killing of wildlife threaten many species with extinction, it also poses a severe threat to the communities whose economies are dependent on tourism. For Kenya, a country with a $5 billion wildlife-based tourism industry, uncontrolled poaching has the potential to cause significant harm.

The countries of coastal East Africa recognize the need to protect their wildlife for purposes of conservation as well as economic growth, as well as to maintain governmental authority, but the limited capacity of customs and law enforcement agencies impedes efforts to halt poaching and trafficking. The governments of the region face similar capacity challenges in addressing overfishing and deforestation.

Implications for the U.S.
In recent years, coastal East Africa has played a key role in U.S. foreign policy, because of its links to terrorism and the potential for future conflicts or humanitarian disasters. Since the deadly terrorist bombings of 1998 in Nairobi and Dar es Salaam, the United States has joined democratic leaders in the region to take on the challenges of poverty, hunger, and disease through a broad range of development programs and an expansion of trade and economic ties. Washington has also worked with the region’s security leaders in building regional capacity to fight piracy and terrorism and to respond to humanitarian crises.

Allowing unsustainable extraction of resources to continue will limit the efficacy of U.S. development programs in the region. Deforestation and overfishing threaten to negate the strides that have been made in improving agricultural productivity and combating the region’s chronic food and water insecurity issues. Illegal fishing and piracy threaten U.S. security and trade interests. And the illegal wildlife trade has environmental, economic and security ramifications.

Recommendations
Economic well-being, social stability, and national security in the region must be built on a foundation of environmental sustainability. Tackling overfishing, deforestation, and illicit wildlife trafficking will require a collaborative effort on bilateral and multilateral levels. Over the past decade, increased U.S. involvement in the region has created a strong basis for cooperation. Regional organizations and international agreements also offer potential for addressing region-wide natural resource degradation.

Combating illegal natural resource trade will require a whole-of-government approach that begins with strengthening of on-the-ground enforcement, including existing national and regional monitoring and enforcement programs. Reducing the trade will require cooperative efforts to break up the sophisticated criminal organizations and rebel groups involved, as well as interrupting the flow of illegal products at major transit points. Also, demand for these illegal products will need to be reduced through education and law enforcement in the destination countries.

Improving conditions for economic growth and development in the coastal East Africa region will require an improved capacity for governance, particularly in the natural resource sectors. Capacity building, design of appropriate regulations, and monitoring and enforcement programs can be supported by USAID, the Millennium Challenge Corporation, and the GEF. Where feasible, regulatory and technical assistance should support devolution of authority to the local level through community-based natural resource management organizations, which have proven to be effective in promoting sustainable development.

The U.S. government is already heavily invested in health and development initiatives in coastal East Africa. Mainstreaming natural resource management and climate-smart approaches into these initiatives could significantly increase their effectiveness and reduce threats to resources and stability. Support for regionally based efforts, such as the natural resource agendas of NEPAD and COMESA, could boost effectiveness.

Trade and investment policies can also be employed to support sustainable resource. The Overseas Private Investment Corporation (OPIC) and the U.S. Export-Import Bank, as well as the African Growth and Opportunity Act (AGOA), could support U.S. investments in sustainable agriculture and fisheries production that would boost food security and limit environmental degradation. 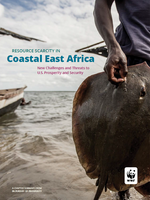