Modern India is a land of contradictions. India’s economy has grown rapidly and is now the world’s fourth largest. But by 2025 India will be the world’s most populous country. Already some 900 million people live on less than $2 a day. The world’s largest democracy, India is plagued by political paralysis and corruption. Although the country is poised to be a global power for decades to come, water and energy scarcity, aggravated by climate change, pose a serious threat to India’s future. To overcome the threats to economic growth and stability, the U.S. should expand its engagement with India on clean energy, climate change, and water use.

Environment
Water is foremost among India’s environmental scarcities, evidenced by water shortages, inadequate clean water, falling water tables, and regional instability related to conflicts over water. The country will be water stressed by 2025 and water scarce by 2050. Water scarcity stems in large part from overuse for agriculture, encouraged by underpricing. Many of India’s rivers and much of the ground water is contaminated. As many as 600 million people do not have access to adequate sanitation facilities, and some 21% of communicable diseases in India are water related. India’s expected population growth over the next decades will further stress the existing infrastructure and complicate the task of providing clean water for millions of people.
Climate change will aggravate water scarcity and contribute to heat waves, drought, severe storms and flooding. India already faces a general warming trend, with Northern India facing the brunt of the higher temperatures. Glaciers are receding at 10 to 15 meters per year, leading to significant decreases in river flows. The once predictable Indian monsoon is no longer so, and torrential storms have increased.
India also faces a severe energy shortage. Seventy-five percent of rural India relies on traditional sources of energy including firewood, and about 300 million people have no access to electricity. Efforts to increase electricity generation capacity and coal production have fallen short. Energy is significantly underpriced and state utilities are in financial trouble. Experts estimate that India’s energy production needs to quadruple over the next 20 years to support economic growth. Yet India is already a major contributor to global CO2 emissions.

Environmental degradation and scarcity are driving socioeconomic change. Water scarcity, rising temperatures and drought, which have harmed agricultural production and driven up food prices, have driven millions to the cities. The country is already 30% urban, with 45 cities of over a million people. Migration from rural areas is expected to continue, with 200 million more people expected to move to the cities over the next 20 years. Indian cities are not equipped to handle the rapid growth. Shanty towns proliferate and lack of clean water, clean energy and sanitation infrastructure contribute to health problems and slow development. As conditions worsen for both poor and wealthy in urban areas, their frustrations may spark more instability.

India’s environmental problems stem in part from governance problems, including corruption, inadequate monitoring of industry, complex regulations, underpricing of natural resources, and poor coordination between the central government and state governments. Moreover, responsibility for the environment is divided among more than a dozen ministries at the national level.

Implications for U.S.
The U.S. increasingly relies on India to provide stability across South Asia. But an India riven by environmental crises is going to face staggering internal challenges. Environmental problems may lead to rising food and energy prices and a significant economic slow-down, with disastrous consequences for the very poor and the potential for a widespread financial crisis. India’s neighbors will face similar difficulties, and border tensions are likely to intensify. If climate conditions continue to worsen, India may face mass domestic migration and migration from its neighbors, particularly Bangladesh. Such humanitarian crises could provoke increased regional tensions with Pakistan and China. The consequences of not partnering with India to see it through this crisis could be staggering, not only for India but for the region and beyond, as well as for the U.S.

The U.S. has, historically, had limited interaction with India on environmental matters. However, these issues have moved towards the forefront of U.S. concerns over the last decade for several reasons. First, is the general opening of relations between the two countries. The U.S. has shifted away from a policy that sought primarily to balance the relationship between India and Pakistan, allowing for a more diverse agenda, including environmental matters.

The Obama administration has put significant emphasis on the U.S.-India relationship, promising a broad and deep relationship and launching a Strategic Dialogue. There is now more systemic and routine cooperation between the two governments as well as a wide range of private sector and civil society entities. These connections have opened the door to a range of new efforts, including a number of joint initiatives on clean energy, low carbon growth, and climate. Most notable are the U.S.-India Partnership to Advance Clean Energy which supports clean energy research and deployment, backing from the U.S. Export-Import Bank and Overseas Private Investment Corporation for clean energy development in the region, and USAID’s South Asian Regional Initiative for Energy.

Recommendations
In this context, India’s water, climate and energy problems are increasingly recognized as having national security, regional and international implications of importance to the U.S. Making environment a pillar of U.S. foreign policy toward India will require a whole-of-government effort on the part of the U.S., and increased funding to match the scale of the problems. The U.S. can support India in improving environmental governance by providing technical consultations and government-to-government exchanges. The U.S. should take advantage of opening in the bilateral dialogue and the growing relationship with India to support more sustainable development. A first step could include expanding the scope of the effective, but limited, clean energy and climate initiative. For example, a joint platform for open innovation in clean energy could allow for virtual collaboration and intellectual property rights strategies, or the U.S. could provide greater support for clean energy technologies appropriate for the poor.

In the realm of climate change, the U.S. should seek common ground with the developing countries. Improved relations with India open the door for greater cooperation in both bilateral and multilateral climate change fora. More directly, the U.S. could increase support to India’s efforts to control deforestation and to international financing for climate change mitigation.

Water security has been neglected and should be raised to a top tier issue, bringing in expertise across the U.S. and Indian governments, as has been done on clean energy. The U.S. might also want to launch a regional dialogue on water security, since this is a transboundary issue. Addressing water scarcity will require a second green revolution, focused on a diversification away from water intensive crops, sustainable growth and efficient land and energy use. U.S. technical experts in the public and private sectors could provide critical support to this effort. Investments in water and energy efficient infrastructure could be facilitated by the U.S. 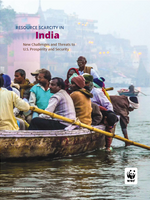