Effective management of scarce water resources along the arid U.S.-Mexico border is central to development on both sides of the border. A complex network of institutions and agreements currently governs the region's water resources, and has proven sufficiently flexible to forestall major conflicts. However, water is already overdrawn, and competition for water will increase with population growth and the expected impacts of climate change in this drought-prone region. Water scarcity, if not well-managed, will pose a threat to border communities and to the U.S.-Mexico relationship.

Environment
The 2,000 mile U.S.-Mexican border cuts across semi-arid and arid regions, defined by the Sonora and Chihuahua deserts. Two rivers have allowed for agricultural and urban development on both sides of the border: the Colorado River and the Rio Grande (Rio Bravo in Mexico), which forms about 1,000 miles of the border. Both rivers have been dramatically altered by a series of dams, reservoirs, and hundreds of miles of aqueducts and canals; most of the rivers' flow is withdrawn, primarily for agriculture but also for the region's rapidly expanding urban areas. In the face of growing scarcity, both Mexico and the U.S. rely increasingly on pumping finite groundwater reserves. Overuse is also leading to water quality problems, including rising salinity and other contamination. As climate change makes rainfall more irregular and the region becomes more arid, these problems will worsen.

The border region, considered as 100 miles on either side of the border, is now home to some 14 million people and may reach 20 million by 2020. Illegal immigration has been one of the greatest sources of border tension, largely because the U.S. and Mexico have substantially different levels of economic development. Nevertheless, poverty is a problem on both sides--slums along border are often lacking in basic water and sanitation services. Agriculture, made possible by irrigation, is the backbone of the region's economy. Between 70% and 80% of the water withdrawn from the Colorado and the Rio Grande supports agriculture, primarily high-value, water-intensive crops. Industry and urban centers have also expanded, particularly since implementation of NAFTA.

Mexico's development has long been interwoven with the economics and policies of the United States. The close linkages are evidenced by the nearly one million border-crossings made every day and the $367 billion in annual cross-border trade. Along the border, the federal, state, municipal and other local governments as well as numerous civil society organizations work together on cross-border issues. While the US public generally views the border as dominated by problems of illegal immigration, drugs and violence, in fact the critical regional problems faced by both countries are similar: rapid population growth, poverty, insufficient infrastructure, and a challenging natural environment.

The need for cross-border agreements and infrastructure arose as soon as the border region began to develop agricultural production over a century ago. Water rights differ substantially in the two countries. In Mexico, water is part of the national patrimony and is governed by the National Water Law. The Mexican National Water Commission is responsible for allocating use rights and supporting infrastructure investments, although some steps have been taken towards decentralization in recent years. On the U.S. side, the institutional framework has always been much more decentralized. Water is treated as property, which can be owned by individuals. The states, not the federal government, govern water rights under a great variety of legal regimes, and negotiated interstate compacts are used to ensure water deliveries. But only the U.S. federal government can enter into international agreements on transboundary water. Despite the difficulty of working through this network of water rights, the U.S. and Mexico have negotiated several important agreements.

The 1944 U.S.-Mexico Water Treaty is the primary international accord governing water allocation in the region, and forms the core of a collection of compacts, federal laws, court decisions and decrees, contracts and regulating guidelines that guides U.S. domestic and international water allocation. Under the terms of the treaty, Mexico is guaranteed an annual quantity of 1.5 million acre-feet of the Colorado flow and the U.S. is guaranteed about 350,000 acre-feet from the six Mexican tributaries of the Rio Grande. The treaty also established the responsibilities of the bi-national International Boundary and Water Commission, which has played a central role in managing the U.S.-Mexico water relationship.

A number of events have led to serious tensions over water use along the border; some of these are clearly linked to gaps in the 1944 treaty and others to changing water use. These have included a drawn-out incident in which a U.S. irrigation district pumped saline water back into the Colorado River, affecting the quality of water reaching Mexico and, more recently, the lining of the All-American Canal, which reduced water availability on the Mexican side. Several periods of drought over the last two decades have also raised tensions as Mexico accumulated a large water debt to the U.S. Solutions have been worked out in each of these cases under the aegis of the treaty, although the process has been slow.

Implications for U.S.
Worsening water scarcity along with rising temperatures will affect communities and economies on both sides of the border, creating severe water and energy problems for urban areas and posing a major threat to agriculture and ranching. Estimates for California's agricultural losses range up to 40%; Mexico may suffer greater losses. Reductions in the region's agricultural output could have serious impacts on food markets in the U.S. and Mexico.

Local-level cross-border cooperation has grown with Mexican decentralization, and the U.S. has made investments in water conservation and municipal water supply on the Mexican side. However, lacunae in the existing institutional framework and the growing pressure on the water supply will contribute to cross-border tensions. Notably missing from the treaty agreements to date are groundwater issues. Many transboundary aquifers are already the cause of dispute. Nor does the treaty clearly establish definitions, rights and procedures in times of long-term drought. New provisions under the 1944 treaty provides for water reallocation in times of drought do not address the possibility that droughts will become increasingly frequent and severe. Experts are divided as to whether the existing institutions will have the flexibility to deal with the growing regional pressures.

Recommendations
To date, the complicated system of laws, treaties, compacts and institutions has sufficed, in large part because of the willingness of the two countries to cooperate on technical and financial issues. The flexibility of the system has allowed it to address new situations, but the challenges ahead will require broader and faster responses. Technically, much can be done to reduce water use and loss. But with the border's growing population and aging infrastructure, investment will need to increase substantially. And when technological and financial solutions are not enough, cutbacks will need to be made in agriculture production and possibly industrial production as well. To ensure that agreements and investments address the region's water problems in a comprehensive way, participatory, efficient river basin institutions will need to take the lead. There is already a push in this direction in both countries.

While many of the conflicts and agreements over water along the border have a decidedly local cast, the ways in which the two countries approach these problems are tied to broader U.S.-Mexico relations. Addressing water issues amicably can provide a means to strengthen the relationship. The extensive consultation, cooperation and collaboration entailed by joint water management in the border region can provide a positive context for dealing with other cross-border economic and security issues, and perhaps provide a model for other international river basins. 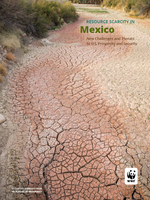