Pakistan's burgeoning population, poor governance, and internal and external threats combined with a huge energy shortage, water scarcity, and widespread environmental degradation have left the country on the brink of a downward spiral. Given overwhelming security and economic concerns, Pakistan's fledgling democratic system has not made environment a priority. However, addressing water and energy scarcity is essential for development, and the threat posed by climate change makes those problems more urgent. U.S. involvement has been heavily focused on regional security issues, but a new approach to Pakistan could increase regional stability by tackling environmental scarcities.

Environment
Pressure on natural resources has led to widespread degradation in Pakistan. While pollution and unplanned urban expansion are worsening health conditions, mining, deforestation and soil erosion are causing land degradation. Energy shortages are holding back economic growth. But by far the gravest problem in this very arid country is water scarcity. Because Pakistan’s agriculture-based economy depends on rainfall, climate change will have serious impacts on both food production and the broader economy. Climate change will bring high temperatures, water shortages, shorter growing seasons, increased pests and diseases, and increased flooding and drought. Glaciers that feed Pakistan's rivers and irrigate its plains are retreating, causing increased flooding in the Indus and Kabul Rivers. Major floods in recent years affected a fifth of the country. In the longer-term, water scarcity will increase, leaving Pakistan extremely food insecure within 45 years.

Pakistan must manage not only its environmentally-induced social problems but internal destabilizing pressures from armed insurgencies and external threats arising from the conflict in Afghanistan. Pakistan's economy is under severe stress, marked by slow growth, high inflation and deficits. The cost of current environmental degradation is about 6% of GDP, including illness and premature mortality as well as reduced agricultural productivity. Long-standing pressures on arable land, complicated by major structural inequalities of land ownership, are aggravated by worsening water shortages and extreme weather. U.S. funding, linked to Pakistan's support of the war in Afghanistan, has shored up the economy up in recent years. As a result, the impending withdrawal of coalition forces may exacerbate the country’s economic problems. Government reforms that could boost the economy have been forestalled by institutional weakness. And, as long as continuing political and economic instability remains a clear danger to the state, security investments will preempt environmental investments.

Governance has been impaired both by long-standing military involvement and by the overwhelming focus on security concerns. Institutional failures and broader social forces, including the influence of the military, have excluded environmental considerations from the national agenda for decades. Defense spending and debt service accounts for most of the national budget. Despite urgent pressures for greater food security, spending for environmental resources and climate change is minimal. For example, the most recent budget increased funding for nuclear energy but cut funding for crop research. On paper, the government recognizes the importance of environment and sustainable development, and has developed national policies for environment and for climate change, but these have not been implemented.

Pakistan's security state has long given primacy to addressing tensions with its neighbors, notably India and Afghanistan, and to suppressing internal insurgencies. The latest war in Afghanistan has aggravated political instability and contributed to economic slowdown. Water issues, particularly the shared waters of the Indus River, have potential to ignite conflict with Pakistan’s historic rival, India. Water management can likewise foster cooperative mechanisms, such as the long-standing Indus Water Treaty between Pakistan and India, which has withstood three wars and other security challenges. As water scarcities deepen in coming years, the imperative for expanding cooperation on both environmental and energy issues could gain momentum.

South Asian diplomacy has recently taken on a broad range of technocratic initiatives with some success, despite unresolved territorial disputes, and has bred a number of new regional organizations. Most relevant is the South Asian Association for Regional Cooperation (SAARC), which includes Pakistan, India and Afghanistan among its members. SAARC focuses exclusively on multilateral issues, and has potential for fostering multilateral ecological cooperation. Its work program includes establishing a Convention on Environmental Cooperation. On Pakistan's western border, the Economic Cooperation Organization (ECO) has a directorate responsible for minerals, energy and environment. Also, the recently revived Pakistan-India Joint Commission has agreed to cooperate on climate change, renewable energy, and environmental protection.

Implications for the U.S.
Pakistan is central to U.S. geo-strategic interests in South Asia. As a result, the U.S.-Pakistan relationship has always been rooted in regional security concerns, and substantial aid over the last decades has largely served military purposes. Yet, Pakistan's uneasy alliance with the U.S. has fueled domestic tensions and instability. U.S. interventions, including drone strikes, and the unclear nature of U.S. and Pakistani obligations and objectives in the Afghanistan war have provoked public resentment of the relationship. The irregular flow of U.S. funds has added to the problem. In the U.S., Washington's unrealistic expectations have led to the perception that Pakistan is deliberately uncooperative. U.S. foreign policy consistently links Pakistan with Afghanistan, based on the perceived security threat, without considering Pakistan's wider interests. Stabilizing relations will require a better understanding of the challenges facing Pakistan.

Recommendations
The U.S. should shift away from its focus on "Afpak" to establish an approach that addresses the natural resource scarcities constraining Pakistan's development and threatening further regional conflicts. Environmental scarcities, particularly water, food and energy shortages, affect the daily lives of Pakistanis. A new U.S.-Pakistan security pact must give central place to these critical resources. If there were palpable progress on development indicators and underlying environmental problems, public support of security measures, including military operations, would grow. Conventional security can be strengthened by improving resource security.

Pakistan's vulnerability to climate change and environmental stresses is now well recognized domestically and there is a vibrant civil society sector focusing public attention on climate issues. However, efforts by the Pakistani government to address mitigation will not be sufficient; support from industry, civil society, and donors will be necessary to respond to climate change and ongoing degradation. U.S. efforts in this regard, such as the 2009 civilian aid package, have fallen short. The USAID-funded South Asia Regional Initiative for Energy, likewise, is an important effort in this regard, but needs greater support from the U.S. government.

A gradual shift from bilateralism to multilateralism is also essential to address water and energy scarcities in South Asia. Linking the "hard" politics of security to the "soft" politics of the environment and natural resources could be used for peace-building, and has considerable potential for achieving broader international security objectives in the region. Regional agreements can be used to strengthen regional relations and address shared environmental problems. For example, strengthening regional management systems for the region's rivers could improve cooperation in other areas too. Likewise the U.S. New Silk Road initiative, which supports cooperation in the region for energy, water, transport, and infrastructure, offers a medium for bringing the regions' countries together to support development. In the final analysis, however, environmental scarcities will only be addressed if Pakistan's national security apparatus recognizes the connection between environmental scarcity and national stability. 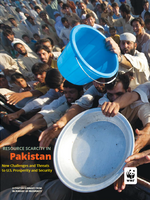