The South China Sea is one of the world’s most economically important waterways, providing transport, food and other vital resources for this densely populated region. It is also one of world’s most contested regions. Lying at the heart of Southeast Asia, the semi-enclosed sea is bordered by Brunei, China, Indonesia, Malaysia, the Philippines, Taiwan, and Vietnam, all of which have some claim to the sea’s vast marine and mineral resources. The South China Sea is vital for East Asian trade and for U.S. trade across the Asia Pacific region. Ongoing disputes over territory and resources, likely to be aggravated by climate change, pose a threat to U.S. interests in the region.

Environment
The coastal waters of Southeast Asia and China along the South China Sea are remarkably productive and biologically diverse; oil and gas resources beneath the sea floor are also believed to be extensive. Chinese estimates hinting at a new Saudi Arabia beneath the waves are probably overly optimistic, but hydrocarbon reserves are nevertheless considerable. With rising energy demand throughout the region, interest in exploiting these fossil fuels is growing.

Renewable marine resources are already heavily exploited. The South China Sea provides up to 10 percent of the global catch of fish. Southeast Asia relies more heavily on fish as a source of dietary protein and income generation than any other region. And with the rapidly growing middle class across East Asia, demand for fish protein has soared. This has led to more fishing ships than ever plying the waters of the South China Sea, and increasing stress on the ecosystem. Overfishing is estimated to have depleted coastal fish stocks by 5 to 30 percent. The sea’s remarkable coral reefs, which provide food, protection against storms and floods, and jobs, have also suffered unprecedented rates of destruction in recent decades. Losses of sea-grass and wetlands, as well as land-based pollution, pose further threats to the rich marine environment. As degraded resources and rising demand force fishers to go ever further in search of fish, run-ins between fishing boats and maritime security forces have spiked, particularly in disputed areas.
Southeast Asia is expected to suffer disproportionately from climate change. Global sea level rise will submerge the low-lying coastal areas surrounding the South China Sea and many of its islands. At the same time, rising temperatures and changes in rainfall may decrease agricultural production and increase a host of health threats, putting considerable burdens on communities, economic growth, and government services.

The South China Sea contains two major groups of features subject to overlapping sovereignty claims. The Paracel Islands, in the northern half of the sea, are currently controlled by China, but are claimed by Taiwan and Vietnam. The Spratly Islands, to the south, are far smaller, more dispersed, and even more contested, and are subject to overlapping claims by six nations, including China, Taiwan, and Vietnam. Both island groups, as well as a number of smaller features, have seen their share of violence, and the tangle of disputes appears intractable.

All the countries involved in these disputes are signatories of the United Nations Convention on the Law of the Sea (UNCLOS). This treaty defines the maximum claims and resource rights that a nation has in its territorial waters and its exclusive economic zone (EEZ) and continental shelf. Most of the South China Sea’s waters fall within the legitimate claims of the surrounding states. However, under the terms of UNCLOS, the Paracel and Spratly Islands as well as some even smaller features generate their own EEZs and continental shelves with resource rights attached, creating a strong incentive for countries to claim them.
China’s efforts to assert its regional claims have escalated recently, with both physical presence, especially around the Paracels, and expansive territorial claims. The so-called “nine-dash line” claim, based on a 1914 Chinese map, would give nearly all of the waters of the South China Sea to China. Submitted to the UN in 2009, this claim is probably not supportable under UNCLOS.

Implications for the U.S.
Successive administrations have stated that the United States takes no position regarding ownership of any disputed feature, in the South China Sea or elsewhere. However, Washington does recognize the U.S. stake in these disputes, and has objected to the excessive maritime claims of the disputants. The U.S. government has issued objections to the claims it deems unsupportable under UNCLOS, and has objected to attempts to change the status quo by force.

Because of China’s growing insistence on its claims, in conjunction with its growing global role, the Obama administration has given greater attention to the South China Sea disputes. Although the United States has never ratified UNCLOS, the treaty serves at the governing regime for the United States in maritime territory issues. The U.S. government recognizes the threat that China’s claim poses to this international maritime law, and has a vital interest in ensuring that violent change is avoided in the South China.

Recommendations
The United States has essentially no power to resolve the disputes in the South China Sea. As long as the claimants are committed to confrontation rather than cooperation, efforts to preserve the region’s resources and mitigate the natural threats they face will prove ineffective. However, resolving the disputes is not necessary to manage them. And in this, the United States can play a role.

The greatest obstacle to regional collaboration is China’s commitment to the nine-dash line. The most critical step, therefore, is to convince Beijing that its interests are better served by promoting its claims within the bounds of international law. Without taking a position on particular sovereignty disputes in the South China Sea, Washington does insist that they be resolved peacefully and according to international law. But this U.S. position has limited credibility as long as the United States has not ratified UNCLOS. Ratification would send a resounding message that the United States is committed to defending the international legal regime.

To prevent violent conflict, the United States must continue to push the regional claimants to conclude a binding code of conduct. This will be vital for preventing both purposeful and accidental clashes over access to fisheries, oil and gas, and other resources. Beyond these diplomatic efforts, Washington should ratchet up assistance to the Southeast Asian claimants to build up their maritime domain awareness capacities, in order to reduce the likelihood of unintended conflicts. 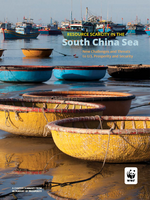