Building on three years of the largest consumer surveys about the elephant ivory trade in China, WWF in cooperation with GlobeScan has conducted a survey specifically targeting Chinese outbound travelers to destinations in East and Southeast Asia - a group that has been identified as one of the only demographics in China that has been purchasing more ivory since the domestic ban went into effect in 2018.

The survey, which was conducted between August 2019 and January 2020, surveyed over 3000 Chinese consumers who had traveled to seven key destinations in Asia - Cambodia, Hong Kong SAR, Japan, Laos, Myanmar, Thailand, and Vietnam - at some point during the previous two years. It showed that about one in ten of those surveyed had planned to purchase ivory prior to making their trip. More than half of the people who reported buying ivory said they did so as a gift for a friend or family member, while a quarter did so as a gift for a business relation. A shocking 22% of surveyed travelers had somebody recommend visiting an ivory retailer, with recommendations most often given by local tour guides and staff at tourist information centers. As such, targeting the practice of gifting ivory, as well as designing interventions with the travel and tourism sectors as facilitators in ivory purchases, will be key going forward. 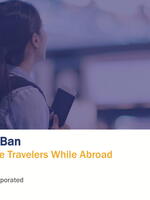