WWF Mongolia, in partnership with the Mongolian Ministry of Environment and Tourism, the Global Snow Leopard & Ecosystem Protection Program (GSLEP), and numerous other partners helped to conduct Mongolia’s first ever large-scale snow leopard population and habitat assessment. The assessment found the country’s snow leopard population to be stable and confirmed the presence of approximately 953 snow leopard.

Mongolia is home to the world’s second largest population of snow leopards, which are important indicators of the health of the landscapes they live in. However, learning about snow leopards and their distribution is a difficult task and there are critical gaps in understanding how many of these big cats are left in the wild. This nationwide survey is in line with Mongolia’s global commitment and will provide a benchmark to assess the population size of the snow leopard in other countries. 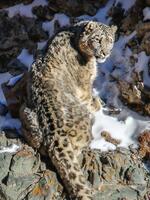