Snares are contributing to a wildlife extinction crisis, while also impacting ecosystems that support human well-being across Southeast Asia. Usually made from wire cable, nylon, or rope, snares are rudimentary traps used to supply the demand for wildlife meat and products. They also increasingly supply an urban demand for wildlife, which is often consumed as a delicacy. Overall, snares impact more than 700 mammal species in the region, including rare and charismatic animals such as the Asian elephant, Sumatran rhinoceros, saola, and banteng. They are also now the greatest threat to the long-term presence of tigers in Southeast Asia.

This report details the scale of the snaring crisis, its impacts on people, nature and wildlife, and lays out a set of recommendations, which if taken holistically, could help halt and reverse this crisis. 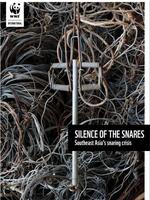