The Great Sea Reef (GSR) region in Fiji stretches across an arc over 450 km long from the western coast of Viti Levu to the northeastern point of Vanua Levu. The GSR contains over 1,200 km2 of reef systems, including the third-largest barrier reef system in the world. It is exceptionally biodiverse—with over three-quarters of known coral species, over half of the recorded fish species, and almost half of known endemic species from Fiji. The GSR also plays a crucial role in Fijian livelihoods, food security, and cultural identity. A third of the Fijian population lives within the region, and over three-quarters of all inshore fish supplied to urban markets are sourced from the reef. The GSR is also a major hub of international tourism—which generates over FJD 1.1 billion annually and accounts for more than 25% of Fiji’s GDP. Marine areas within the reef are divided into qoliqoli—customary fishing areas—which are under the control of Indigenous Fijian communities.

In September-October 2019 the most comprehensive ecological survey of the GSR conducted to date was completed. The survey spanned 74 sites, extending along the full length of the GSR, from the Mamanuca Islands in the southwest to Udu point in the northeast. Of the sites surveyed, 48 had historic survey data available, allowing trends in coral reef health to be calculated. Survey results are reported for the GSR by province and by individual qoliqoli. 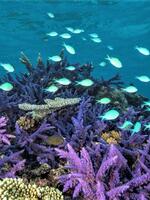