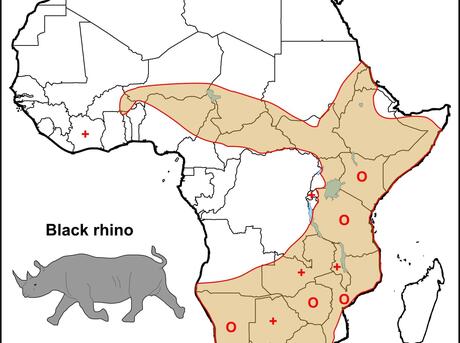 Population distribution of the Black Rhino (Click for larger view)

Black rhinos are the smaller of the two African rhino species. The most notable difference between white and black rhinos are their hooked upper lip. This distinguishes them from the white rhino, which has a square lip. Black rhinos are browsers rather than grazers, and their pointed lip helps them feed on leaves from bushes and trees. They have two horns, and occasionally a third, small posterior horn.

Populations of black rhino declined dramatically in the 20th century at the hands of European hunters and settlers. Between 1960 and 1995, black rhino numbers dropped by a sobering 98%, to less than 2,500. Since then, the species has made a tremendous comeback from the brink of extinction. Thanks to persistent conservation efforts across Africa, black rhino numbers have doubled from their historic low 20 years ago to around 5,500 today. However, the black rhino is still considered critically endangered, and a lot of work remains to bring the numbers up to even a fraction of what it once was—and to ensure that it stays there. Wildlife crime—in this case, poaching and black-market trafficking of rhino horn—continues to plague the species and threaten its recovery.

Recovering species is essential for effective wildlife conservation and critical to the work WWF does around the world. Here are just a few of our favorite, recent recovery stories. 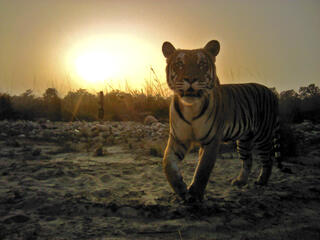 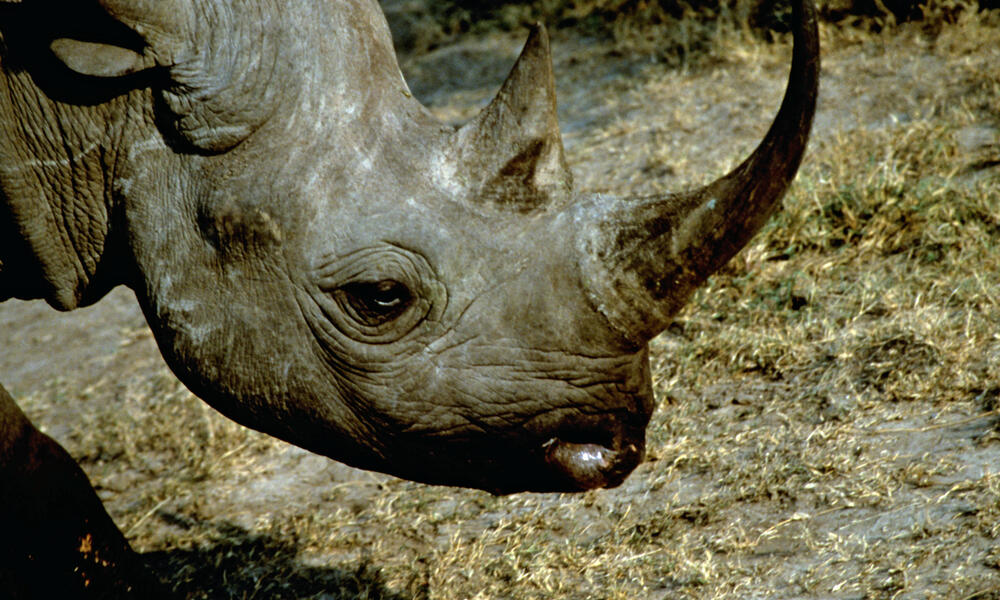 Next to poaching, loss of habitat contributes to declines in rhino population. Human activities such as agriculture, settlements, and infrastructure development result in the loss and fragmentation of rhino habitat, which increases the risk of poaching and inbreeding.

Of all the threats facing black rhinos, poaching is the deadliest. Black rhinos have two horns which make them lucrative targets for the illegal trade in rhino horn A wave of poaching for rhino horn rippled through Kenya and Tanzania, continued south through Zambia's Luangwa Valley as far as the Zambezi River, and spread into Zimbabwe. Political instability and wars have greatly hampered rhino conservation work in Africa, notably in Angola, Rwanda, Somalia, and Sudan. This situation has exacerbated threats such as trade in rhino horn and increased poaching due to poverty.

Today, black rhinos remain critically endangered because of rising demand for rhino horn, from some Asian consumers, particularly in Vietnam and China, who use them in folk remedies. A recent increase in poaching in South Africa threatens to erase our conservation success, reaching an apex in 2014 when 1,215 rhinos were poached. Poaching numbers are slowly decreasing—594 were poached in 2019—but poaching continues unabated with numbers remaining unsustainably high.

High population density in some sites leads to lower breeding rates and increases the probability of disease transmission. Smaller, isolated populations can also be prone to genetic impacts from inbreeding. 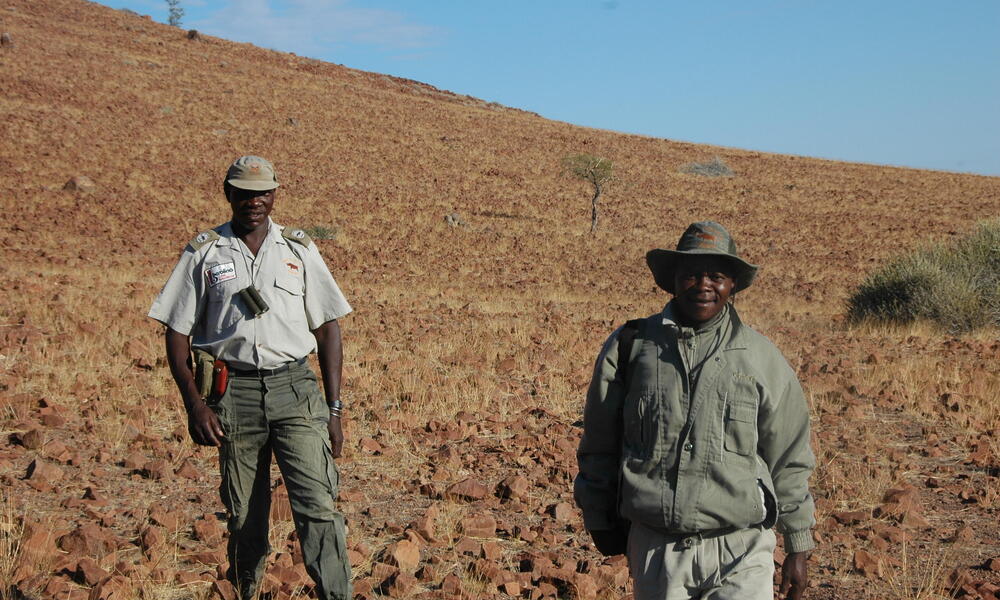 WWF launched an international effort to save wildlife in 1961, rescuing black rhinos—among many other species—from the brink of extinction. Thanks to persistent conservation efforts across Africa, the total number of black rhinos grew from 2,410 in 1995 to more than 5,000 today.

To protect black rhinos from poaching and habitat loss, WWF is taking action in three African rhino range countries: Namibia, Kenya, and South Africa. Together, these nations hold about 87% of the total black rhino population.

Poaching is the deadliest and most urgent threat to black rhinos. WWF is working with government agencies and partners in Namibia, Kenya, and South Africa to support law enforcement agencies, develop and build on innovative tech solutions, and equip and train rangers to stop poachers. 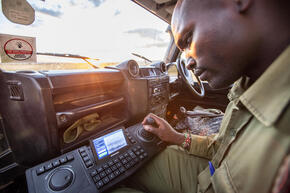 WWF supports annual aerial population surveys at key sites such as Etosha National Park in Namibia. The surveys are critical for evaluating breeding success, deterring poachers, and monitoring rhino mortality. WWF is also working with partners to develop and implement cutting-edge technologies in Namibia, South Africa, and Kenya to closely monitor key populations. When paired with boots on the ground, innovative solutions like electronic identification and tracking tags, radio collars, drones, and camera traps provide us with the data we need to make important decisions for black rhino populations going forward. We install new thermal and infrared camera and software systems that can identify poachers from afar and alert park rangers of their presence.

Community support and engagement is a cornerstone of WWF’s work, particularly in Namibia. Hand-in-hand with our Namibia partners, we assist communities to set up conservancies and help to foster the knowledge, skills, and capacity required to successfully govern their conservancies and manage their wildlife resources. These communal lands are now home to Africa’s largest remaining free roaming black rhino population.

Community engagement will also play a role in South Africa, where we are looking to conserve black rhino through community governance, training, and identification of alternative livelihood opportunities.

Namibia was the first African country to incorporate protection of the environment into its constitution. In 1996, the new Namibian government granted communities the right to create conservancies - areas with defined borders and governance and management structures outside of parks - where communities have the right to manage their natural resources. With WWF’s long-term support, the government has reinforced this conservation philosophy by empowering its communities with rights to manage and benefit from the wildlife on their lands through efforts like community game guards, robust monitoring efforts, community engagement campaigns, partnerships between communities and private sector tourism partners, and translocation projects, which relocate wildlife species including rhinos into new habitats so that they have more space to breed.