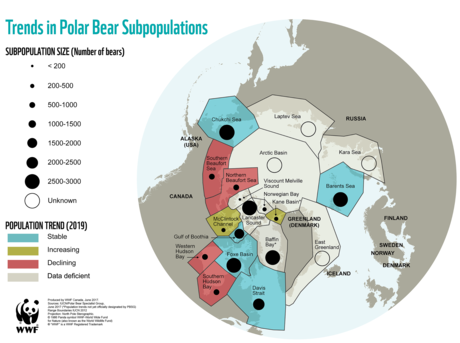 Polar_Bear_Populations4_1.1... This map shows the 19 subpopulations of polar bears across the Arctic.

Polar bears are the world's largest terrestrial carnivore. Under conservation laws, polar bears are classified as both marine mammals in countries like the United States because they spend most of their lives on the sea ice of the Arctic Ocean, and terrestrial mammals in other countries. Polar bears are found in the Arctic, with a few populations ranging into the sub-Arctic regions of the North Atlantic and North Pacific.

Considered talented swimmers, polar bears can sustain a pace of six miles per hour by paddling with their front paws and holding their hind legs flat like a rudder. They have a thick layer of body fat and a water-repellent coat that insulates them from the cold air and water.

Polar bears spend over 50% of their time hunting for food. A polar bear might catch only one or two out of 10 seals it hunts, depending on the time of year and other variables. Their diet mainly consists of ringed and bearded seals because they need large amounts of fat to survive.

Polar bears rely heavily on sea ice for traveling, hunting, resting, mating and, in some areas, maternal dens. But because of ongoing and potential loss of their sea ice habitat resulting from climate change–the primary threat to polar bears Arctic-wide–polar bears were listed as a threatened species in the US under the Endangered Species Act in May 2008. As their sea ice habitat recedes earlier each spring and forms later each fall, polar bears are increasingly spending longer periods on land, where they are often attracted to areas where humans live.

The survival and the protection of the polar bear habitat are urgent issues for WWF. In October 2019, the International Union for the Conservation of Nature (IUCN) Polar Bear Specialist Group released a new assessment of polar bear populations showing that the number of polar bear subpopulations experience recent declines has increased to four, with eight populations still being data-deficient. The good news is that five populations are stable while two have been experiencing an upward trend.

The Arctic Refuge has been a place undisturbed by development. But in 2017 Congress approved opening the Coastal Plain of the Refuge to allow for oil and gas drilling. WWF has been vocal in its opposition for a host of reasons, and there is one significant bit of logic even Fish and Wildlife agrees with—the climate crisis makes the future of the region uncertain. Oil and gas development only compounds the problem. 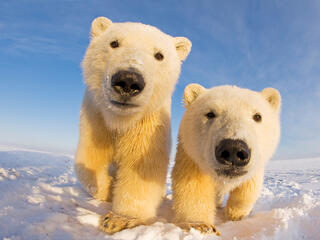 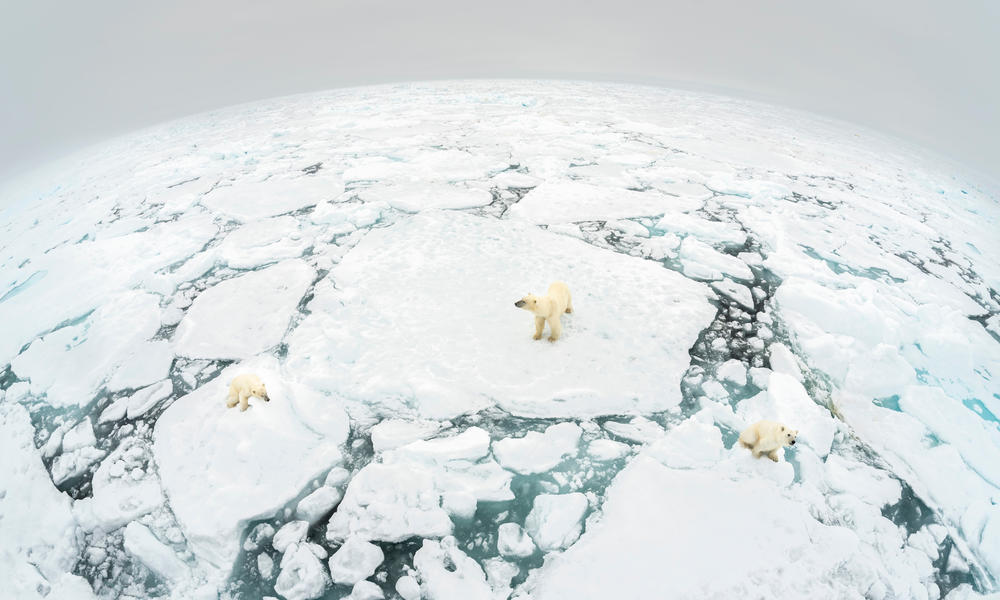 The loss of sea ice habitat from climate change is the biggest threat to the survival of polar bears. Other concerns for polar bears include lethal response to human-polar bear conflict, toxic pollution in the environment, and direct impacts from industrial development, such as disturbance of maternal dens or contact with an oil spill, and potential overhunting of some subpopulations.

WWF is supporting community initiatives to ensure they can live safely alongside the Arctic's top predator.

Due to climate change the Arctic is heating up twice as fast as anywhere else on the planet, shrinking the Arctic sea ice cover by 14% per decade. Compared to the median sea ice cover recorded between 1981-2010, we have lost about 770,000 square miles, an area larger than Alaska and California combined.

At the same time, the retreating ice is resulting in more polar bears spending longer periods on land.

Offshore petroleum installations and operations in the Arctic are expected to increase in number. This expansion would likely affect polar bears and their habitat in many ways, including the following:

Increased Arctic shipping represents a risk to polar bears. As traffic by barges, oil tankers, and cargo ships in Arctic waters increases, so do the risk of oil spills and human disturbance to polar bears.

Many Arctic areas have strong polar bear management and monitoring. But there are a few places where unsustainable hunting appears to be happening, including unreported and illegal hunting. 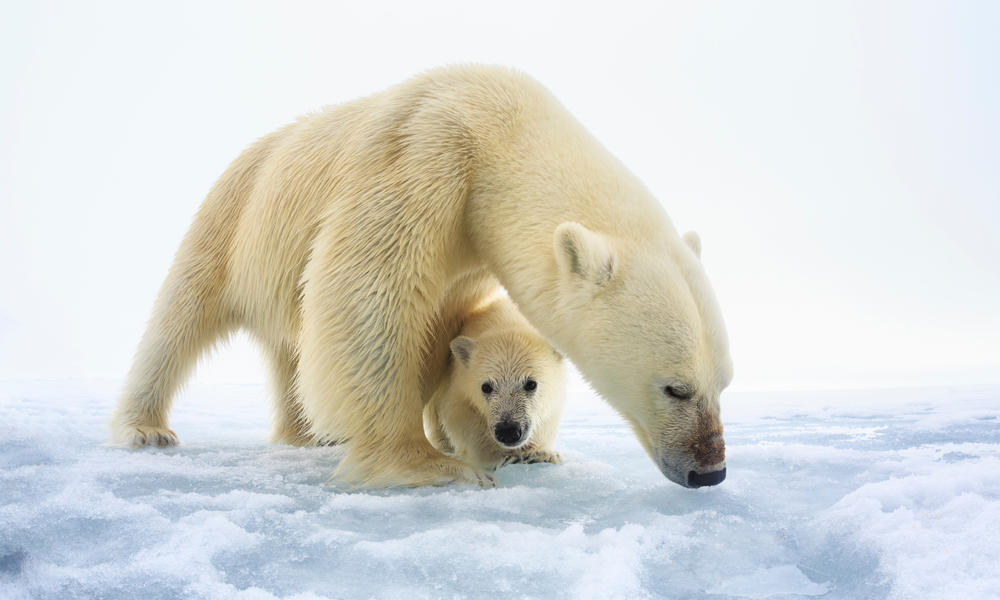 WWF has a dedicated worldwide team working on issues of climate and energy, working regionally, nationally, and internationally.

At meetings with governments whose countries are in the polar bear range, WWF has successfully pushed for a statement formally recognizing the urgent need for an effective global response that will address the challenges of climate change. WWF has also successfully advocated for the creation of an international polar bear management plan.

As climate change forces polar bears to spend longer time onshore, they come in contact more often with Arctic communities. Unfortunately, these interactions sometimes end badly for humans and bears. In Russia and Alaska, WWF addresses this challenge by supporting local efforts to protect people and polar bears. Watch this video to learn more about the benefits of involving local people to protect polar bears and communities.

Keeping polar bears separate from people is better for both, since polar bears that wander into communities pose a risk to people, and people often respond by killing the bears. WWF has responded with a variety of locally-led initiatives to help reduce conflict.

If we want to build meaningful management plans for polar bears, we have to know more about them.

Scientists are currently monitoring the conditions and movement of polar bears in the US, Canadian, and Norwegian regions of the Arctic. WWF and our partners are working to understand the impact that different threats, such as climate change and the expansion of industry in the Arctic, are having on different polar bear populations.

For many years, we have run a polar bear tracker, using data from WWF-supported researcher teams to monitor some of the animals by satellite. By tracking these bears, scientists can map a polar bear's range and examine how habitat use may change in response to shifting sea ice.

This information reveals changes and adaptations over time. WWF also provides funding for polar bear researchers to travel to Russia and the US to share and exchange scientific information about polar bears with other researchers. WWF continues to work with scientists at SPYGEN, a DNA specialist firm, to pioneer an innovative tool that can extract DNA from a polar bear footprint.

WWF also supports polar bear research that tells us about their "vital signs" like body condition, reproduction, and cub survival. In addition, we support research on population trends in polar bear populations, which are even more important than hard numbers. WWF has contributed hundreds of thousands of dollars to polar bear surveys, and continues to do so.

Knowledge comes from many places. In the Arctic, we speak of our work as being "knowledge-based" rather than solely "science-based." Indigenous peoples of the Arctic have a store of ecological knowledge based on their own observations of the environment and on information handed down over generations.

WWF encourages the use of Traditional Ecological Knowledge (TEK) to inform management policies in the Arctic. We have supported several projects that collect this form of knowledge, helping to provide a more rounded knowledge base. WWF has also supported research on TEK in the US and Canada, which provides invaluable information for conservation and management of the species.

WWF's goal is to ensure that wherever industrial development takes place, it is sustainable and does not damage wildlife populations and ecosystems to any great extent. We offer technical expertise on oil spill prevention and response. We also advocate for the highest development standards through national and international venues.

WWF collaborates with scientists, conservationists, and local people to oppose oil and gas development in areas whose ecological value is far too great for risking exposure to spills.

To help maritime vessels stay clear of ecologically fragile places, WWF is preparing sensitivity maps for areas of the Arctic. We have also offered best practices for shipping in the Arctic and continue to work at the International Maritime Organization on a polar code that would make Arctic shipping safer.

WWF recognizes the urgency of protecting habitat for polar bears as they rapidly lose their sea ice habitat from climate change.

PROTECTING THE LAST ICE AREA OF THE ARCTIC:

While we want to see local people benefit from tourism, no one benefits if tourism drives away the sights the tourists have come to see.

WWF spent many years working with tourism operators in areas inhabited by polar bears to find ways to limit the impact of tourists on the bears and their habitat.