Some tuna can swim as fast as 43 miles per hour

If fish were like cars, tuna would be the Ferraris of the ocean—sleek, powerful, and made for speed. Their torpedo-shaped bodies streamline their movement through water, and their special swimming muscles enable them to cruise the ocean highways with great efficiency.

Tuna are remarkable and impressive wild animals. The Atlantic bluefin can reach ten feet in length and weigh as much as 2000 pounds (more than a horse). Their specialized body shape, fins and scales enable some species of tuna to swim as fast as 43 miles per hour.

Tuna swim incredible distances as they migrate. Some tuna are born in the Gulf of Mexico, and travel across the entire Atlantic Ocean to feed off coast of Europe, and then swim all the way back to the Gulf to breed.

These extraordinary marine animals are also integral to the diet of millions of people and are one of the most commercially valuable fish. The majority of the market is made up of four species: skipjack alone account for more than half of the global catch of tuna, followed by yellowfin, bigeye, and albacore. The critically endangered bluefin tuna only makes up 1% of the global catch. As the methods of catching tuna have advanced over the years, the conservation and management of tuna has not evolved as quickly. According to the United Nations Food and Agriculture Organization, most tuna stocks are fully exploited (meaning there is no room for fishery expansion) and some are already overexploited (there is a risk of stock collapse). According to the International Seafood Sustainability Foundation, 65% of tuna stocks are at a healthy level of abundance, but 13% are considered overfished.

Setting the line on transparency in tuna fishing

For tuna fishing, data is more important now than ever. Most tuna stocks are fully exploited, meaning at best there is little to no room for expansion and at worst, they are in danger of collapsing. That’s why unmonitored tuna fishing is unacceptable. Commercial tuna fishing is increasingly transparent—but more needs to be done 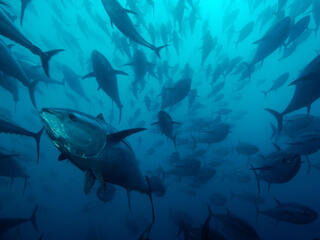 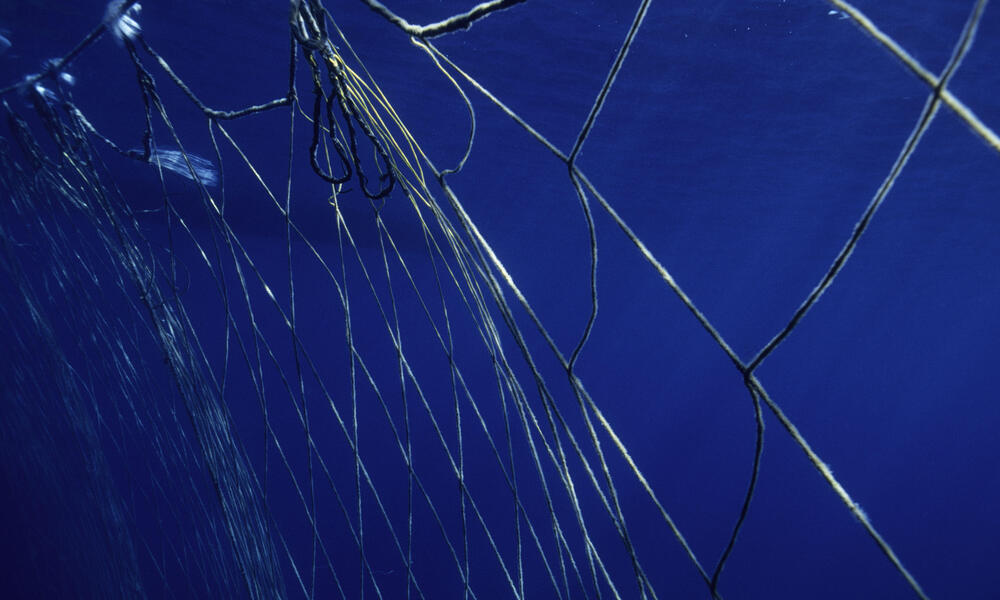 Where tuna move, fishers have lined the ocean with giant nets and endless lines of fishing boats. Fishers have resorted to high-tech ways to catch tuna, including devices that draw the fish into bunches so that fishermen can catch more of them at once. Many of the world’s valuable tuna species face a number of urgent yet common threats to their continued existence such as significant population declines, poor international conservation management, and high levels of illegal, unreported, and unregulated (pirate) fishing.

Since juvenile yellowfin and bigeye tuna school with adult skipjack, they are increasingly caught as bycatch, or unintended capture, by vessels that target skipjack. The removal of these juvenile yellowfin tuna before they have a chance to spawn could lead to fewer yellowfin in the long term. Although most yellowfin and bigeye tuna stocks are abundant throughout their range, they can be in danger of overfishing if management does not adequately take this bycatch into account.

According to information collected by the International Seafood Sustainability Foundation (ISSF), several tuna stocks are currently overfished, meaning that adult fish are being caught faster than they can breed and replenish the population. Pacific bluefin tuna are heavily overfished, and the Atlantic bigeye and the Indian Ocean yellowfin tuna are experiencing overfishing with increased catch levels in recent years. The skipjack tuna, while quite resilient, could easily slip into a vulnerable state due to overfishing if improperly managed.

Bigeye tuna are prized in Asia for sashimi as well as frozen and fresh in other markets. As bluefin tuna populations shrink around the world, pressure on bigeye fisheries is increasing. Bluefin tuna populations have declined severely from overfishing and illegal fishing over the past few decades –not just Pacific bluefin tuna, but also Atlantic and Southern bluefin tuna. Population declines have been largely driven by the demand for this fish in high-end sushi markets, and their futures are uncertain.

Illegal fishing of Atlantic bluefin tuna is a big problem and the fishery has been plagued by lack of enforcement. Tuna “ranching” pens that are used to temporarily house and fatten wild fish can serve as a means to launder illegal fishing. 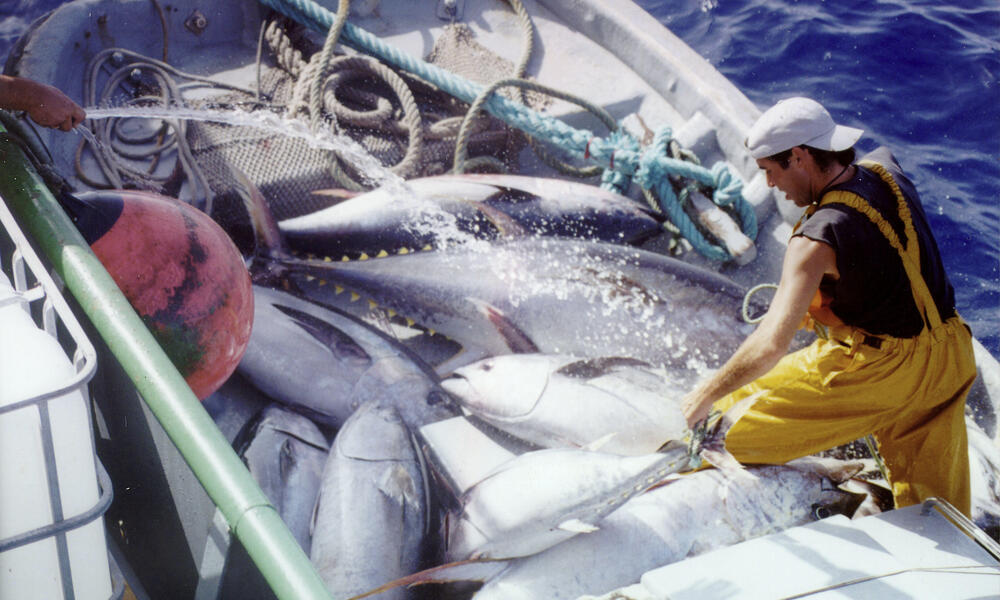 Conserving the world’s tuna populations—and protecting the species that swim alongside them—requires addressing the greatest strain on populations—fishing. WWF has spent the last decade helping to organize the tuna industry around a set of common objectives to improve conservation and management with an end goal of all tuna fishing being certified according to the Marine Stewardship Council (MSC) standard. Our progress to date includes creating a framework for change that can now be used to expand and scale efforts.

Working with the biggest buyers, traders, and sellers of tuna leverages the purchasing power of the private sector to catalyze improvements in fishing practices, management, and conservation. It also provides financial support and incentive for fishers looking to commit to long-term sustainability.

WWF works with tuna processors, traders and scientists through the International Seafood Sustainability Foundation (ISSF), a partnership that WWF helped to launch in 2009. ISSF advances the use of science-based initiatives for the long-term conservation and sustainable use of tuna stock, reduction of bycatch and promotion of biodiversity and ecosystem health. ISSF provides a broad platform for industry leaders, scientists, governments and non-governmental organizations (NGO) to work together. This work is further coordinated through the NGO Tuna Forum in which WWF actively participates.

A Fishery Improvement Project (FIP) draws together fishers, industry, researchers, government, and NGOs to help improve fishing practices and management in a particular fishery toward the Marine Stewardship Council (MSC) standard. WWF recognizes the MSC as the leading program for certification of wild-caught fisheries against an environmental standard and helps drive fisheries toward MSC certification. But not all fisheries are ready for certification.

WWF works in tropical regions of the world where tuna is a cornerstone of the marine ecosystem and economic activity. We collaborate across sectors to develop and implement FIPs, focusing on key pressure points in order to reach sustainability in greater volumes. Working with regional fleets of the largest vessels that catch the most tuna focuses improvements for the most consolidated impact, and sets the example for other fleets, vessels, and gear types to follow.

Through the Global FIP Alliance for Sustainable Tuna, or G-FAST, we aim to Increase collaboration with responsible vessel owners to include and amplify their voices and our collective ability to effectively influence change. Much of this work is focused on mainstreaming improvements through the adoption of new standards and practices through regional fishery management organizations.

The tuna industry continues to explore business cases for improving practices in tuna fishing, management, and trade. WWF supports industry efforts to build sustainable seafood and fisheries into their business practices through our expert knowledge and ability to bring together stakeholders. We are leading the effort to develop case studies and toolkits necessary for stakeholders to implement these sustainable improvements. Whether it is convening a think tank of experts to identify innovative approaches to incentivizing change in conservation and management, or pilot testing technology in countries with limited technical capacity, WWF is building the business case for the march toward sustainability in tuna fisheries.