A day in the life of a tiger tracker 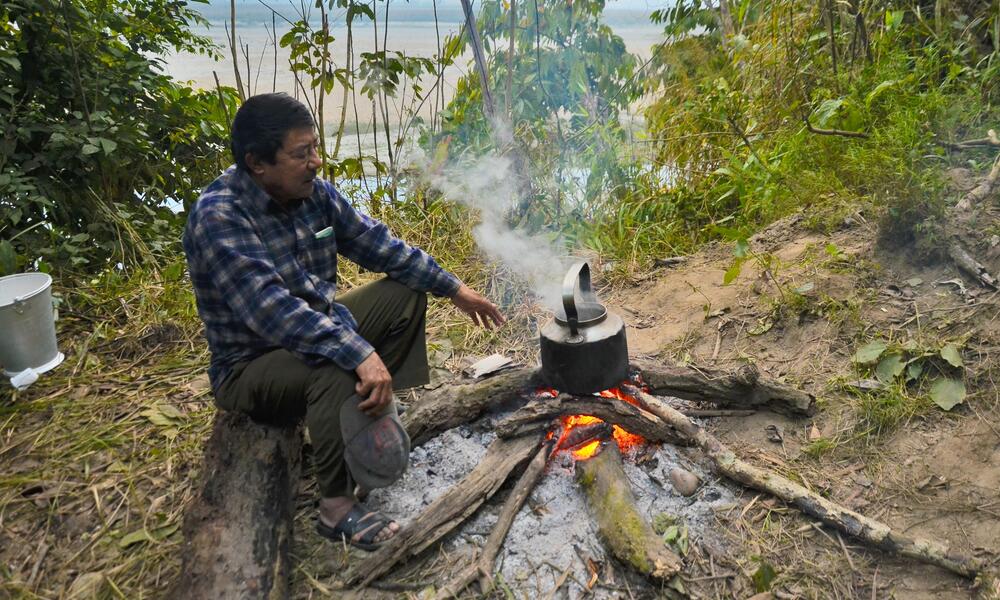 This piece was originally published by WWF-Nepal.

It is 6:30 am and Bishnu is the first to rise from the team.

“There is nothing like the morning scent of the jungle and the fresh aroma of coffee to start your day with,” he says.

By 7:30 am, the rest of the team are by the fire and help themselves to some coffee and biscuits. This is followed by an early lunch of rice, lentils, and vegetables prepared by the team members, each taking their turn at their make-shift kitchen. The team will be having their next meal only once they are back at camp from the day’s work. 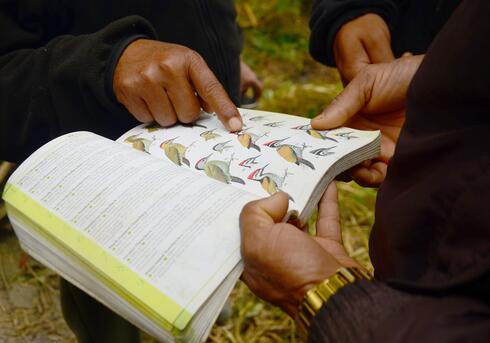 While lunch gets ready, the team discusses their favorite subject - birds. Bishnu shares that there are over 500 species of birds in Chitwan National Park alone. His team is hopeful to spot some of them during the day.

By 9 am, lunch is over. But before the team can head out to work, they have a small tradition to follow.

Prior to setting out on any tiger tracking operation, Bishnu and his team make sure to seek the blessings of whom they call, Ban Devi, or the Forest Goddess.

"It is a jungle out there," exclaims Bishnu. "We do not know what we will meet or encounter. We seek the blessings of the Forest Goddess so that she may guide us through safety in our days and nights in the forests," he adds.

Bishnu also tells us that this ritual dates back decades during the time of the timber syndicate in Nepal back in 1973. Since teams would go into the forest to cut down trees for the timber trade, this religious ceremony was meant to appease the Forest Goddess so that they would come to no harm.

The ceremony is short and simple. Red tika (aka vermilion), rice grains, and flowers are sprinkled on a stone under a tree in the forest as oil lamps and the sweet smell of incense sticks add to the ambiance.

Each member of the team rubs some red vermilion - the color of life - on their forehead to mark the end of the ceremony. It is time to head back to camp to prepare for the day’s work.

Back at the camp, Bishnu and his team plan out the day’s tasks and check and pack all the required equipment and gear.

A map that outlines the area the team is required to cover is spread out for them to review. It has been divided into five segments, about 1.5 square miles each. Bishnu’s team decides that the first spot they would hit would be Nakkali Khola.

Next comes the equipment. The team has with them ten pairs of cameras equipped with motion/infrared sensors and GPS for camera traps to detect and monitor wildlife. They choose the pair they would be installing that day and do an initial check of batteries and settings. The cameras are then packed together with a compass, GPS set, digital camera, range finders, measuring tape, and datasheets.

The team is ready to head out.

After a one-hour hike through the forests, Bishnu and his team arrive at Nakkali Khola, their site for the camera trap installation. The site is located near a stream that feeds into the adjoining Rapti River. Bishnu’s team has spotted tiger tracks along this trail and feel that it is a perfect site to set up the camera trap; they are sure that tigers would use this trail to get to the river for drinking

Bishnu and Harka take charge of one of the cameras while Prakhyat and Bir handle the other. Each camera is mounted on a wooden pole at a height of 16 inches from the ground and placed about 26 feet apart. Sabita marks each camera and memory card with an identifying number - 19A and 19B for this pair. Bishnu then does the interesting ‘tiger walk’ with both hands and feet on the ground in order to test the placement of the cameras; the image taken by the camera shows that the placement is perfect.

Bishnu explains that once a tiger is photographically captured by the cameras, the individual animal is identified with the help of its stripe pattern that is unique to each tiger. The data obtained on image capture and subsequent recaptures is analyzed to estimate tiger populations.

With the cameras installed, the next task at hand for the team is to conduct the habitat occupancy and line transect surveys. The cameras will be left in each grid in the forest for the next 15-20 days.

Together with photographing tigers, Bishnu’s team also needs to record other signs of tiger and prey activity in the area in order to map the distribution of these animals and understand the range occupied by both tigers and the species they prey on. With the camera trap installation completed, the team next walks a distance of just over one mile along the Narayani river bed to conduct the occupancy survey. They are thrilled to come across a continuous track of tiger footprints, also known as “pugmarks”. The team takes note of the details of the pugmarks and photographs them for future analysis. 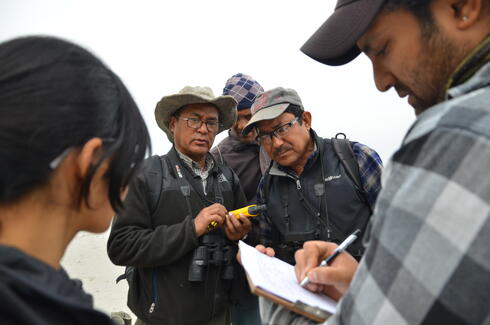 Next is the line transect survey, which is a method used to record prey population density while walking a straight line referred to as a “transect”. Harka takes out his GPS unit to locate the start and end positions for the transect. On this day, our line transects traverse through a riverine habitat and will require team members to walk about a mile in a straight line; doing their best to keep as quiet as they can and not disturb their surroundings. Sabita and Prakhyat volunteer for the task and see a group of hog deer, a prey species for tigers. They quickly take note of this sighting including the number and, if possible, the sex of the animals. Prakhyat uses a range finder to measure the distance between themselves and the hog deer, while Sabita takes note of the direction in which the animal was spotted using a compass.

Bishnu explains that for any forest to house a healthy population of tigers, good habitat and abundance of prey are the two key criteria. The line transect survey data would eventually help the research team to determine prey abundance in the area so that corresponding interventions such management of grassland habitats, wetland creation, etc. can be planned effectively.

Both the line transect and occupancy surveys take close to four hours to complete and it is nearly sun-down by the time the team is ready to call it a day. It is time to head back to camp.

It is already 7:15 pm by the time the team returns to camp, slightly exhausted but happy with the good start to their 20-day expedition. Almost immediately, a fire is lit and dinner gets cooking while Bishnu opens his book of stories to share with the team...a ritual by the fire he follows almost every night at camp.

The story he tells tonight - his personal favorite - dates back to the early 80s when he and Harka used to monitor tigers through the use of radio collars. Back then, bait was used to attract the tigers and, on this particular occasion, Bishnu and Harka had found that a tiger had apparently taken the bait. Walking cautiously to identify the actual location of the site, they were surprised to come across two tiger cubs gnawing on the carcass. In seconds, they heard a loud roar and saw a tiger leap at them. Almost instinctively, Bishnu and Harka darted in opposite directions quite certain that this would be their last expedition together and that the tiger would get at least one of them.

“Our happiness knew no bounds to find that we had survived this close encounter. Come to think of it, it was the cubs that saved us. The mother was only following its protective instincts and chose to stay back with her cubs,” recalled Bishnu.

More stories continued on into the night before the team finally decided to head into their tents. Day would soon follow the night and Bishnu and his team would need to start out early again the next day, guided by the blessings of the Forest Goddess and urged on by a common passion for tigers. 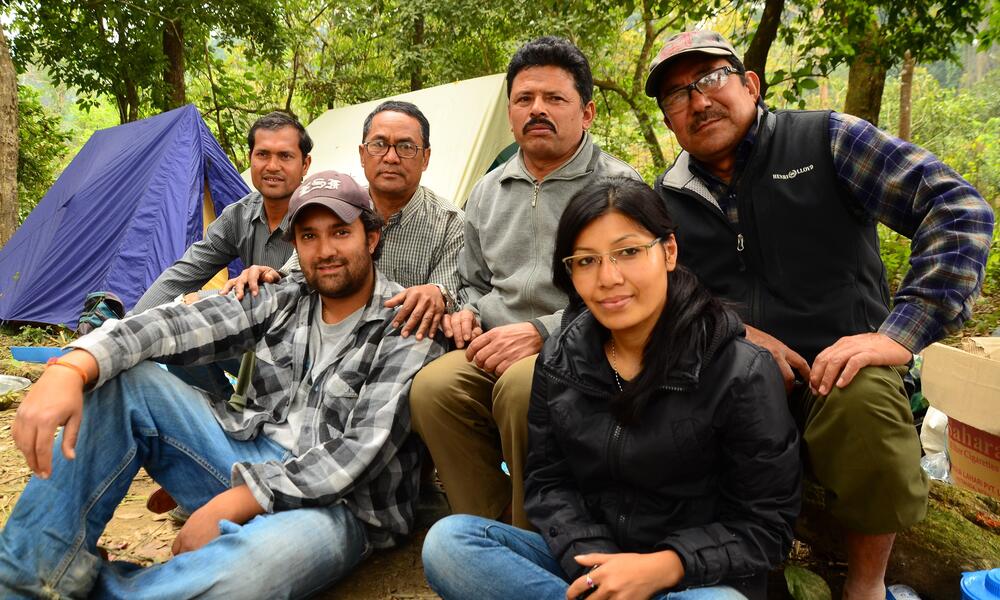