Protecting fish and people in the Philippines

This tale is fraught with sharks, treasure and poachers, with strife and solutions.

Surrounded by marine life 65 feet below the eastern face of Apo Isle in the Philippines’ Occidental Mindoro, I am on a quest to find the true ‘jewels’ of the deep. Not real jewels, of course, but whatever makes this area unique.

An impossibly huge school of yellow-dashed fusilier (Pterocaesio randalli) appears from beneath. I try to estimate their number but simply cannot; they coalesce into a single mass that fills my field of vision. In a moment, they are gone, and I am left looking down into the blue. 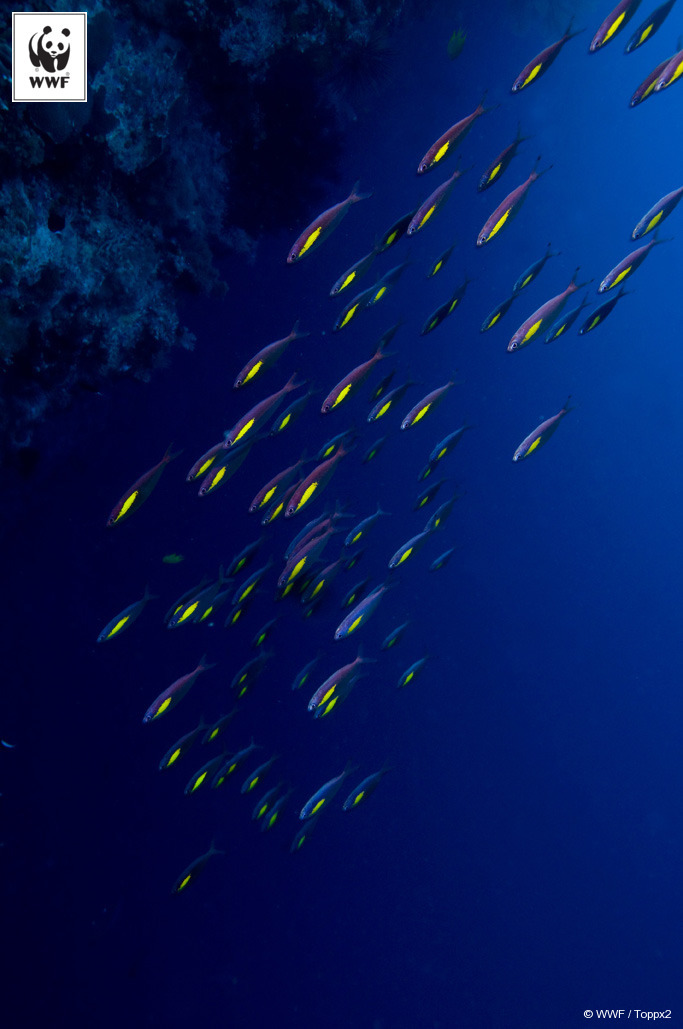 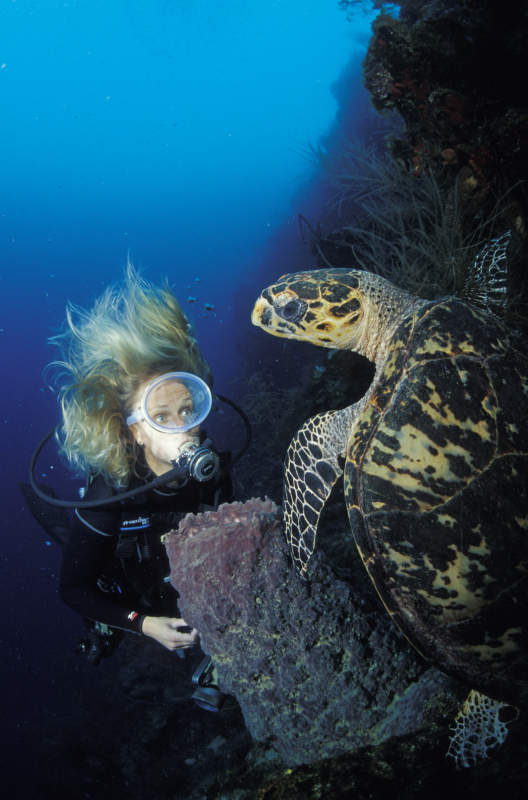 Source of Life and Legend

Apo Reef lies at the northern tip of the Coral Triangle, a 5.7 million square-kilometre region that spans the seas of six countries: the Philippines, Indonesia, Malaysia, Papua New Guinea, the Solomon Islands and Timor-Leste. The Coral Triangle is home to a quarter of the world’s islands and at least 500 species of reef-building coral.

Like the Bermuda Triangle, the area has also spawned a folkloric menagerie. Enchanting mermaids, wailing sirens, ship-tearing kraken and all manner of sea monsters featured in the tales of Age of Sail pirates and privateers.

In actuality, the region is an enormous undersea food factory, whose produce directly benefits half a billion people each year. A single square kilometer of healthy reef can produce over 30 metric tons of grouper, oyster, tuna and other forms of seafood annually. The potential of our seas to sustain life is vast, but fragile.

Today, paradise lies troubled. For over a century, coastal development, destructive fishing practices, coral mining, sedimentation, overfishing and chemical pollution have chipped away at the ocean’s health. Add to that climate change consequences such as ocean warming, acidification and coral bleaching, and we have an undersea war against marine resources. Faced with this problem, many countries within the Coral Triangle have established Marine Protected Areas (MPAs), to conserve what’s left.

Today the Philippines hosts about 10 percent of the world’s MPAs—over 1,000. Established largely through local government initiatives and maintained through the blood, sweat and tears of coastal communities, these undersea enclaves are scattered throughout the archipelago to provide safe havens for marine life, as well as enticing destinations for a growing number of eco-conscious tourists.

Sadly, many MPAs are plagued by a lack of funding. Mismanagement is rife, and it is estimated that little over 100 MPAs are properly administered. The rest are dubbed ‘paper parks’—protected in name only. Since the 1990s, WWF has worked with partners to advance scientific research, policy reform and protected area management in the Coral Triangle. Our Philippine office has pioneered the establishment and upkeep of MPAs in some of the country’s best-known and most productive coral reefs.

Two of the country’s jewels are Apo Reef and the Tubbataha Reefs off the Sulu Sea. 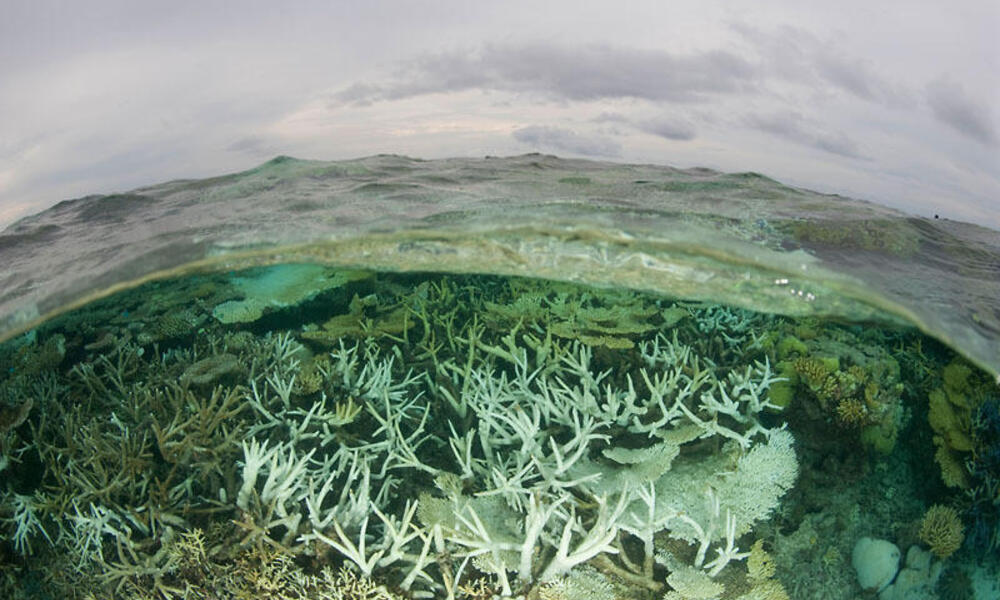 A Pearl of the Pacific

Hailed as the Jewel of Mindoro and a former world-class dive site, 30 years of destructive fishing has left much of Apo Reef in an abysmal state. In October 2007, WWF and the local government spearheaded the total closure of Apo Reef—the country’s largest at 34 square-kilometers—for fishing. What followed were alternative income programs and a robust ecotourism drive designed to keep livelihoods afloat while allowing the reef time to recover.

Giant fish aggregation devices, locally termed payaw, were installed to provide alternate fishing spots for coastal communities. The crude but effective contraptions feature a buoy, counterweight and anywhere from 10 to 20 giant coconut fronds. Algae growth on the decomposing fronds attracts herbivores such as surgeonfish and rabbitfish, which then draw in larger predators.

Fisherman Elmo Bijona testifies to the effectiveness of the devices, “A single payaw can daily yield maybe 15 kilograms of good fish per boat. You can land mackerel, skipjack tuna and even yellowfin tuna on any given night.” The steady rise in the size and number of fish has been matched by an upsurge of tourists to the recovering reef, proving that ecological stewardship can go hand in hand with profit.

Even more dramatic results are evident in other model sites. From 2004 to 2005, the world-renowned Tubbataha Reefs off Palawan doubled the yearly catch per square kilometer—a yield seven times more productive than a typical reef. Of course, there are no fences around MPAs, so the fish that spawn and grow on Tubbataha’s fertile reefs may end up feeding a family in an entirely different region.

Such results don’t come for free. The innovative work on Apo and Tubbataha has been supported by Cebu Pacific passengers who voluntarily offset the ecological impacts of their flights by donating to the upkeep of the reefs.

Back in Apo Reef, a shadow approaches. Gradually it morphs into a white-tip reef shark (Triaenodon obesus); I tense up and check for my dive knife. Then I notice what attracted the shark, and it’s not me. The fusiliers – thousands upon thousands of them, have returned. The shark dives into the mass.

As I watch the fascinating interplay between predator and prey, I notice, as if for the first time, the fusiliers’ gleaming hues of cobalt, ruby and gold, gloriously illuminated by morning rays.

As with the grandest treasure tales, fortunes really do lie sunken beneath the blue. We must realize that the sea’s greatest treasure is its ability to provide – but that shall only continue when we learn to protect the bounty at hand. 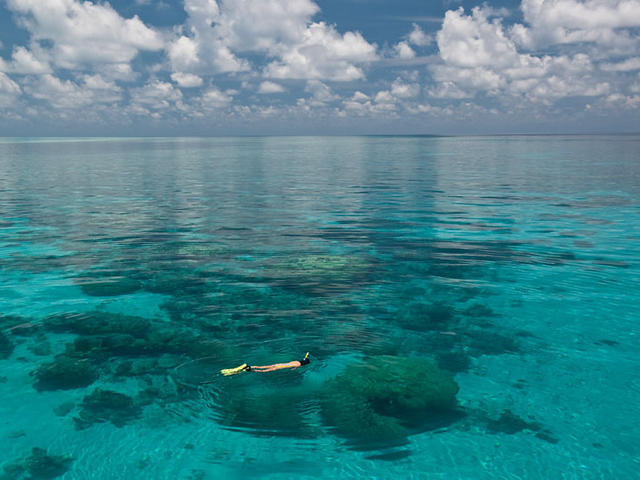 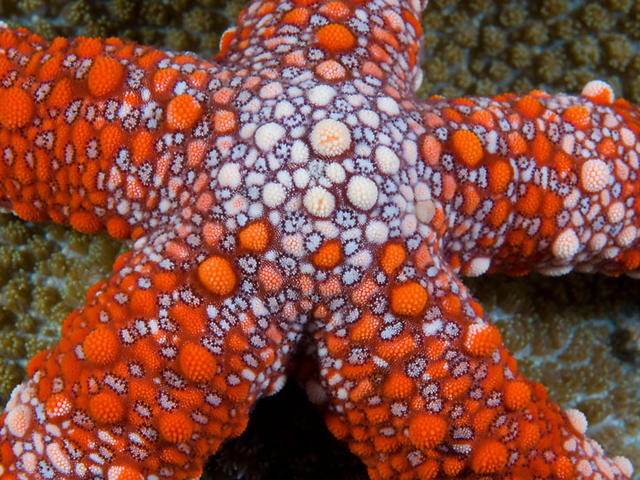 Take action. Stop stolen seafood from entering the US.