An Eye-Opening Visit to Shenandoah Valley 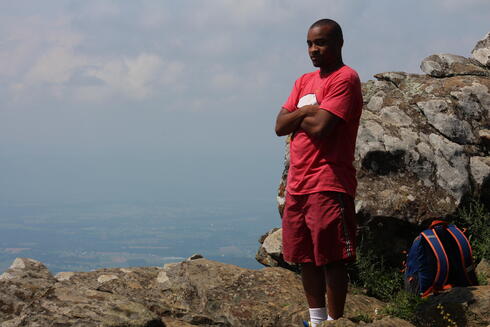 On any given morning, the smog from gas pipes clouds the busy trail of the K street area in mega city Washington, DC. The air is heavy with pollution and thick to breathe. Buildings are everywhere, living in the horizon and the peripheral. Sirens, horns, construction and conversations about de-friending an ex on Facebook are in abundance. But about 70 miles from the city zoo is the peace and serenity of what is Shenandoah National Park. Places like these come too far in between these mega cities.

This summer, my visit to Shenandoah Valley was just as rewarding as the first time I went. After a summer loaded with study and work, a cabin at the top of a mountain for a couple days is a gift wrapped in leaves and kissed by God. I kind of look at this spot as one of the last remnants of the Garden of Eden. It is a collection of Gods work in the flesh. The park has over 10,000 species of animals from Black Bears hunting near Old Rag Mountain to the Peregrine Falcon flying 4,000 feet over Hawksbill Mountain. I have never seen so many trees in such close proximity than here in Shenandoah. The shade from the black locust and maple trees brought springtime to the summer. I never though shooting stars were real. No, really; I thought only those who lived in the cornfields of Nebraska could see them. But here I could see shooting stars in every direction. The night sky was blanketed with thousands and thousands of stars. Darkness was everywhere but I could barely see night.

One of the highlights of my trip was my hike up Hawksbill trail, which is a little over a mile and a half uphill. I started around 2 p.m. The hike leads to Hawksbill summit, which is the highest peak in the park. It gives you a 360 degree view of the whole park. The trail pamphlets categorized the hike as ‘walking up a down escalator for a mile. I laughed, yea right. Man was that hike steep! My friend and I took turns handling the clearly oversized bag that we had brought because one misstep would send one of us down the trail. But once we reached the top, I was able to fully absorb the grandiosity of Shenandoah National Park. The sky was of course sky blue and I could almost sniff the clouds. I was 4,000 feet above the valley! The hills and mountains were cascading into each other like waves of trees crashing into one big mountain.

Then it hit me that the next day I would have to leave Shenandoah. It hit me that most of the people I know won’t have the chance or even want to come to places like Shenandoah. Society is constantly looking for new reason to deforest places like Shenandoah or the Amazon forest. The trees, the falcons, the black bears, the ferns are all entitled to this world as much as we are. Our sole purpose here is to advance life, not subvert it. Why would we as servants of all that is good and moral destroy what God has given us?

However ironically, places like Shenandoah are the pillars for our continued existence here on Earth. Everything has a purpose in the grand plan. It has been proven over and over again by accredited studies and scientist that this world’s survival depends on a robust ecosystem. There is no amount of technological advancement that can replace that. I am not sure if company execs think it a myth that we need our forests, especially since we are constantly polluting it with CO2 and other gases. It is imperative that places like the National Park Service and WWF take the necessary steps to protect what the earth needs most. To wake up and simply walk outside and be able to breathe the air that nature intended for us to breathe is truly an experience that every man should endeavor. It should not be disregarded for the sake of profit and expansion.

WWF's Sacred Earth program works with religious leaders and faith communities who best articulate ethical and spiritual ideals around the sacred value of Earth and its diversity—and are committed to protecting it.