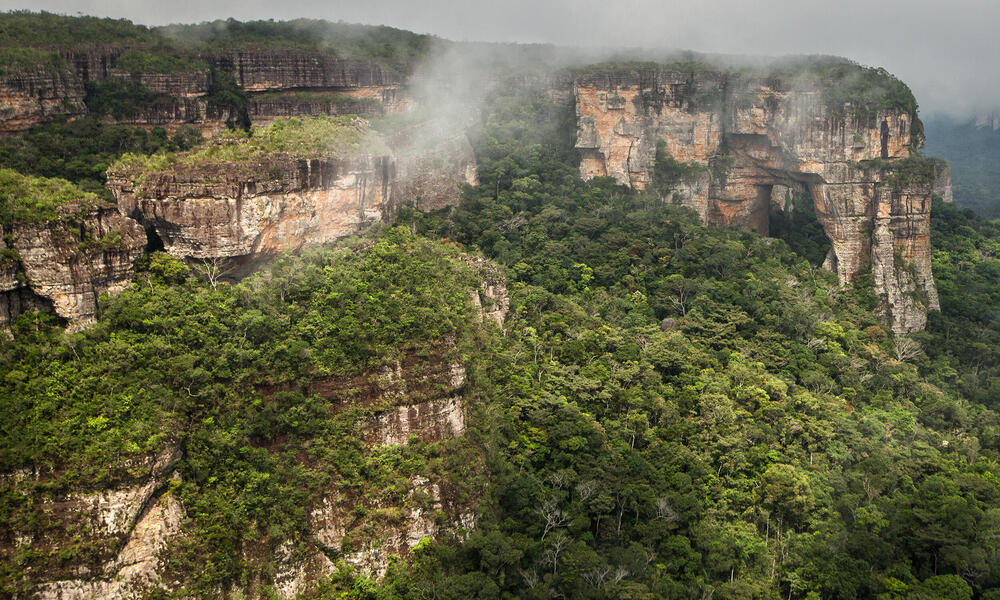 In a momentous win for conservation, Colombia’s Serranía de Chiribiquete was officially expanded to 10.6 million acres today, making it the world’s largest protected tropical rain forest national park. It was also declared as a UNESCO World Heritage site in recognition of its “outstanding universal value” for nature and people.

Colombian President Juan Manuel Santos first announced the expansion of the park by 3.7 million acres in February, marking the culmination of decades of joint conservation efforts by environmental organizations, including WWF, and the Colombian government.

“This is a defining moment for the protection of key ecosystems in Colombia,” said Mary Lou Higgins, Director of WWF-Colombia. “This is also a very important milestone for the Amazon and for forest conservation globally. The expansion and recognition of this unique place as a World Heritage site is a significant step toward safeguarding it for future generations.”

An aerial view of the of blue and yellow macaws (Ara ararauna) over the Caquetá River.

Tapir, or Danta, in the Colombian Amazon.

Located in the heart of the Colombian Amazon, Serranía de Chiribiquete park is a vibrant, biodiverse hotspot that has one of the highest rates of plant diversity in the northern Amazon and is home to thousands of species—many of which are threatened—including lowland tapirs, giant otters, giant anteaters, woolly monkeys, jaguars, and the Chiribiquete emerald hummingbird, the only endemic species in the Colombian Amazon. 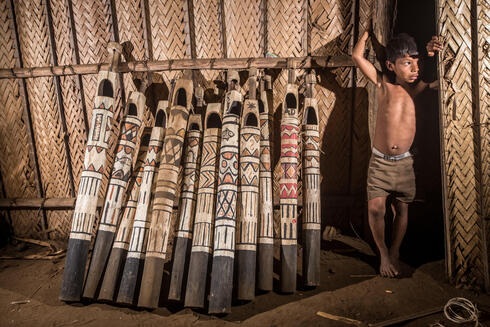 A boy of the Barasano indigenous group, Mutanacua community, Pacoa, near the southeastern border of Chiribiquete National Park.

In addition to its unique biodiversity, the protected area is culturally significant for indigenous communities and contains one of the oldest, largest, and densest archaeological pictographic complexes in the Americas. Fifty murals made up of more than 70,000 ancient paintings depicting animals, hunting, battle, and dancing—some more than 20,000 years old—can be found across the region’s many tepuis, table-top rock formations that rise out of the dense forest.

The park has been a protected area since 1989 and is the ninth World Heritage listing in Colombia, the second-most biodiverse country in the world after Brazil. Chiribiquete’s new designation will help strengthen protections around the park, providing critical buffers against deforestation throughout the Amazon’s essential wildlife corridors.

In recent years, climate change and deforestation from expanding agricultural production, land speculation, and illegal timber extraction—driven especially by political unrest—have been ever-present threats to Colombia’s forests. Sixty-six percent of the country’s deforestation now occurs in the Amazon—one of 11 regions in the world facing the highest risk of deforestation.

WWF experts estimate that if current deforestation trends continue, more than a quarter of the Amazon forest will be lost by 2030.

Caquetá river in the dry season.

Tepuis of Chiribiquete National Park located north of the Mesay River and west of the Cuñaré River.

To prevent further destruction and to secure the natural resources within Colombia’s vital network of protected areas in the coming years, the Government of Colombia is working to manage Chiribiquete under an initiative called Heritage Colombia. Supported by WWF, the Gordon and Betty Moore Foundation, the Protected Areas and Biodiversity Fund, the Wildlife Conservation Society (WCS), Conservation International, and with initial funding from the German government, Heritage Colombia is a Project Finance for Permanence (PFP) initiative that uses an innovative funding mechanism to increase the amount of land in Colombia’s protected areas while ensuring the land is properly governed.

“I like to think of Heritage Colombia as ‘parks for peace and peace for parks,” said Higgins. “Not only will better management and governance of the parks help bring peace to the country, but peace in the country will also help ensure that our parks are healthy for generations to come.”