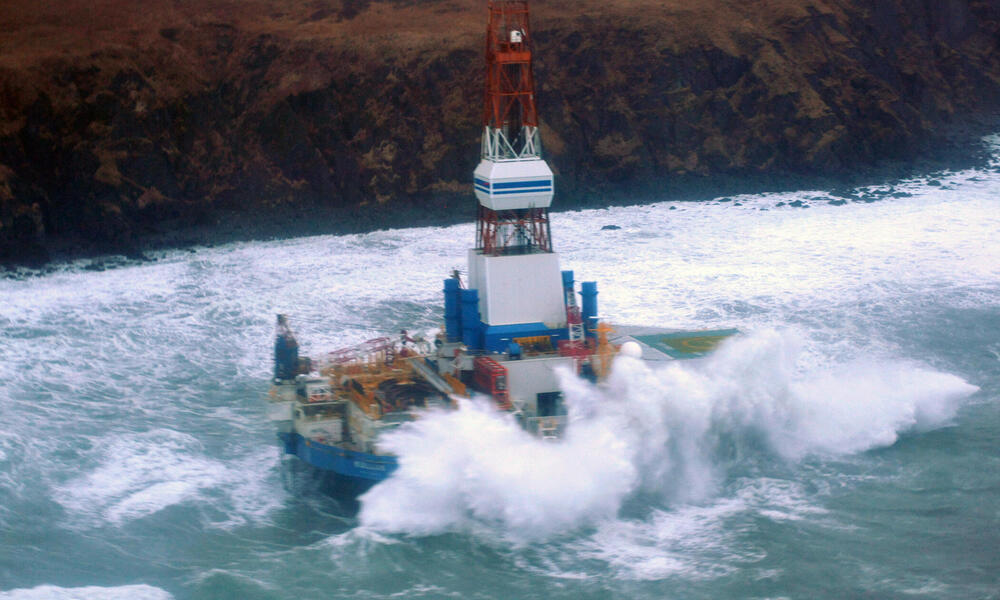 The Kulluk oil drilling rig recently ran aground in Alaska.

An oil drilling rig operated by Royal Dutch Shell ran aground on a pristine wildlife-rich island in Alaska on Monday. This came after a series of technological failures in gale force winds and high seas—driving home serious concerns of WWF about drilling in the Arctic.

“This incident is a clarion call to America that the rush for Alaska’s oil is dangerous and irresponsible,” says Margaret Williams, managing director of the WWF-US Arctic Program. “Despite the US Coast Guard’s heroic response, the safeguards in place to protect the state’s wildlife and communities are still not adequate to prepare for all of the unforeseen circumstances related to drilling in this environment.”

More than 250 federal and state officials, as well as representatives of Shell, assembled in Alaska Tuesday to develop a plan of action for managing what Alaska Department of Environmental Conservation officials called “the largest response effort ever launched in Alaska in the winter.”

A Series of Mishaps

The grounding of the vessel is the last of a series of incidents for Shell after the company received permission from the U.S. government in August to conduct exploratory offshore drilling in Alaska’s Chukchi and Beaufort seas. Over the last four months, the two rigs and tug boat used in the operation have experienced engine failure, fire and broken tow lines. Shell’s response vessel for this mission was deemed ill-prepared for response and Shell was fined for a series of illegal discharges of toxic fluid from one of its drilling rigs. Shell also was fined for violating air permit regulations related to the drilling operation.

“After promising to the US Administration and the public that it was ready for all contingencies in the Arctic, Shell has demonstrated that this is hardly the case,” Williams says. “Enough is enough. Our federal and state officials should use these mishaps as a somber warning to re-evaluate their approach to offshore drilling in America’s Arctic.”

WWF in the Arctic

WWF believes it is not yet safe to allow offshore oil and gas development in the Arctic, as the right technology for responding to an oil spill in such an icy, remote and dark area is not in place and vulnerable areas have not yet been identified. If the time ever comes when such technology exists and is proven to be effective, WWF supports drilling under certain conditions. To that end, WWF is doing the following:

What You Can Do

Join WWF in telling the federal government to keep the Arctic pristine and not jeopardize our natural heritage and local communities over risky oil exploration.