Getting an Even Better Picture of Buffalo 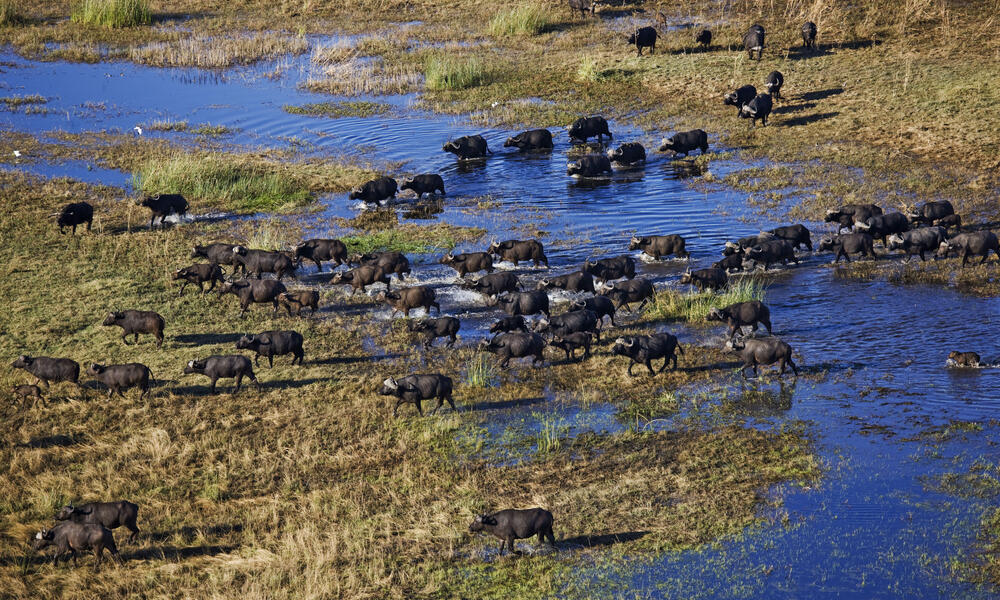 Tracking animals by satellite may seem extreme, but it has become a regular part of conservation science. The work is typically done with GPS collars that provide the geographic coordinates of an animal’s location so scientists can observe and analyze its movements.

Since 2007, WWF has been using GPS collars to track buffalo in various protected areas and communal lands in Namibia and surrounding countries. A recent advance in using satellite imagery to supplement the data provided by the collars is now allowing WWF scientists to get an even better picture of these animals in the wild.

Tracking collars are usually placed on female buffalo because they travel in herds.  The data from one collar can reveal the movements of many animals, but can’t tell you the size of each herd. When one collar’s tracking data suggested a buffalo was traveling from Namibia to Botswana—an unusually long route—WWF researcher Robin Naidoo grew curious. Just how many buffalo were veering into Botswana with the collared female?

It is important for researchers like Naidoo to track these animals in order to estimate the economic and ecological impacts they might have in a given area.

The demands on these animals are great. In and around Namibia, buffalo are important for the area’s cultural and ecological wellbeing.  As one of “the big five” African wildlife species that all visitors want to see, buffalo are a priority for the tourism industry. These animals also serve as prey for lions and help inter-species coexistence by grazing down tall grass that other grass-eating species find unpalatable.

The Future of Satellite Tracking

This study reveals the limitations as well as the potential in using satellite imagery for wildlife tracking. The creatures must be large and roam open grasslands instead of under trees to be visible on high resolution images. Satellite imagery is also limited by the set schedule of the satellite. In the region where Naidoo saw the large herd, researchers can only use the images to observe the animals’ morning activity. But as satellites become more numerous and affordable, many possibilities for tracking wildlife via images will open up.

Tapping into multiple streams of data about a given animal and its herd continues to give us more detailed information about where they are heading, what they are doing and how we can help them thrive.