Meet the biggest animal in the world 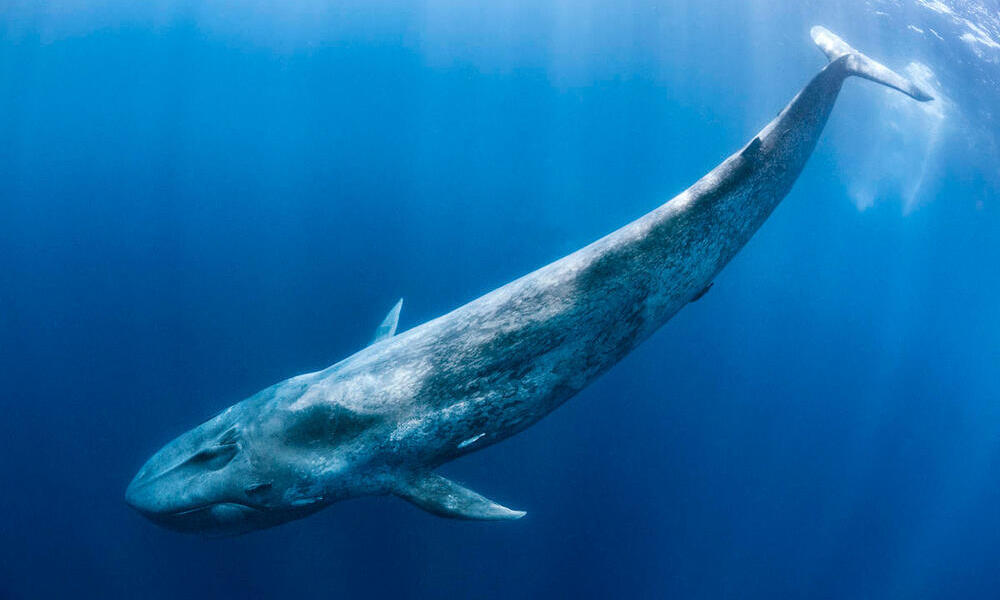 The Antarctic blue whale (Balaenoptera musculus ssp. Intermedia) is the biggest animal on the planet, weighing up to 400,000 pounds (approximately 33 elephants) and reaching up to 98 feet in length. The whale has a heart the size of a small car, and during the main feeding season, it consumes around 7936 pounds of krill per day. It is the loudest animal on Earth, even louder than a jet engine -- its calls reach 188 decibels while a jet reaches 140 decibels. The whales' low-frequency whistle can be heard for hundreds of miles and is probably used to attract other blue whales.

A blue whale surfaces in front of a WWF research team in the Gulf of Corcovado, South America.

A blue whale fluking, or preparing to dive, off the coast of Marissa, Sri Lanka.

The blue whale population in Antarctica was drastically reduced by commercial whaling, which started in the southern Atlantic Ocean in 1904. Despite legal protection through the International Whaling Commission in the 1960s, illegal hunting continued until 1972. From about 125,000 individuals in 1926, numbers were reduced to about 3,000 individuals in 2018, which classifies the species as “critically endangered” on the IUCN Red List.

A remarkable number of Antarctic blue whales was recently sighted

A team of scientists led by the British Antarctic Survey (BAS) was able to share some good news when returning from their recent expedition to the sub-Antarctic island of South Georgia. They counted 55 Antarctic blue whales during their 2020 expedition, which they describe as “unprecedented”. The South Georgia Waters remain an important summer feeding ground.

Dr. Jennifer Jackson, a whale ecologist at BAS, says: “After three years of surveys, we are thrilled to see so many whales visiting South Georgia to feed again. This is a place where both whaling and sealing were carried out extensively. It is clear that protection from whaling has worked, with humpback whales now seen at densities similar to those a century earlier when whaling first began at South Georgia.”

What is WWF doing?

For many years, WWF has worked with the Southern Ocean Commission (CCAMLR) to protect the most critical habitats for iconic species such as whales, penguins, seals, seabirds and their prey – tiny Antarctic krill. In the Southern Ocean, CCAMLR has made a commitment to implement a network of marine protected areas around Antarctica, to protect a range of wildlife impacted by climate change including areas where whales feed on tiny Antarctic krill. WWF works with scientists to provide important information to help governments protect these crucial foraging areas.

“Antarctic blue whales are the largest animals on Earth and a spectacular wonder to witness in the wild. They are the true Antarctic giants. However, they are critically endangered, very slowly recovering from the impacts of 20th Century whaling. Now, we are working to protect the important foraging areas for blue whales in the Southern Ocean before it’s too late. This research reaffirms there is still hope,” says Chris Johnson, Global Lead for the Protecting Whales & Dolphins Initiative.