Our oceans are haunted by ghost nets: Why that's scary and what we can do

Join the fight against plastic pollution

Eight million metric tonnes of plastic leak into our oceans each year. We can all do our part to stop plastic waste. But we need governments to step up and launch a global agreement to stop plastic pollution.

Ghost nets aren’t supernatural, but they are legitimately scary. A ghost net is a fishing net that’s been lost or abandoned in the ocean. They are one particularly egregious part of the global ghost fishing problem, which includes fishing gear abandoned in the water. Any net or line left in the ocean can pose a threat to marine life.

Just because a net is no longer used by fishers doesn’t mean it stops working. These nets continue to trap everything in their path, presenting a major problem for the health of our oceans and marine life.

Ghost nets don’t only catch fish; they also entangle sea turtles, dolphins and porpoises, birds, sharks, seals, and more. These animals swim into nets, often unable to detect them by sight or sonar. The nets keep animals from moving freely, cause injuries, and keep mammals and birds from rising to the surface for air. Since hundreds of animals can be caught in a single net, you can see just how monumental this threat is. And ghost nets harm coral reefs too—breaking corals, exposing them to disease, and even blocking the reefs from needed sunlight.

Ghost nets are also a major contributor to the ocean plastics crisis. Most modern nets are made of nylon or other plastic compounds that can last for centuries. According to a 2018 study in Scientific Reports, ghost nets make up at least 46 percent of the Great Pacific Garbage Patch. Those abandoned fishing lines and nets that do breakdown never go away; they just become smaller pieces of plastic. Marine animals mistake this microplastic for food and eat it, which can harm internal organs, keep them from eating, and expose them to toxic chemicals. 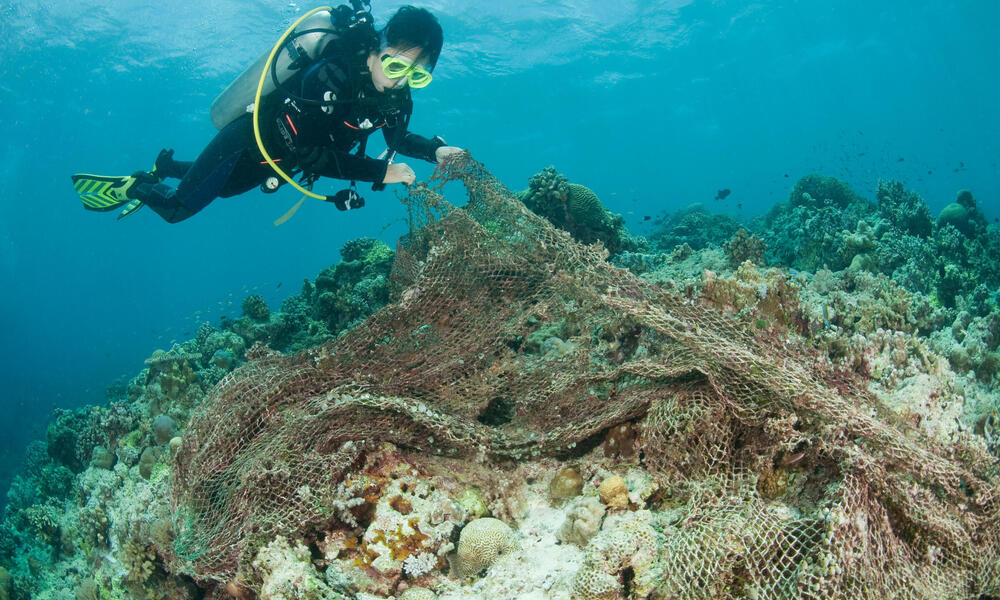 A diver removes a ghost net that is choking coral reef

Exorcising ghost nets from our oceans will require commitment, cooperation, and innovation. WWF is one of many groups working to remove ghost nets from the sea. Our offices around the world are collaborating with local fishers and governments to identify target areas and remove as many nets as possible. In 2015, a single WWF-led mission in the Baltic Sea hauled up 268 tons of nets, ropes, and other material.

To stop these nets from becoming ghosts in the first place, WWF advocates for fishing gear that can be traced to its owner so anyone dumping nets can be fined and refundable deposits on nets to encourage returning or recycling rather than littering. We also help with tools like sonar reflectors that can make ghost nets easier to find and work with small-scale fisheries to develop more sustainable fishing gear and practices. By attacking this problem from all sides, together with conservation partners, fishers, and supporters, we can banish ghost nets and protect our oceans.