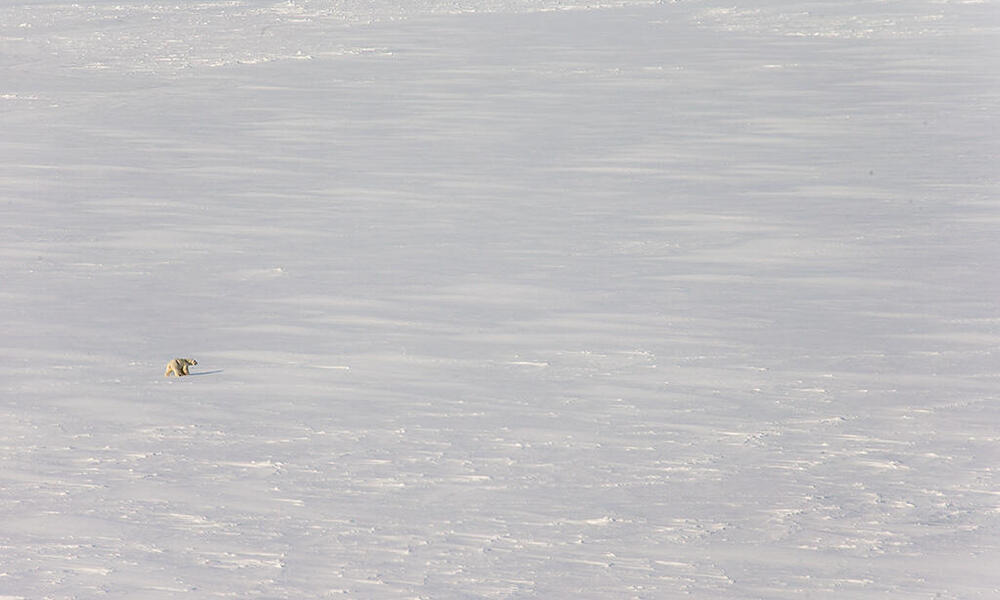 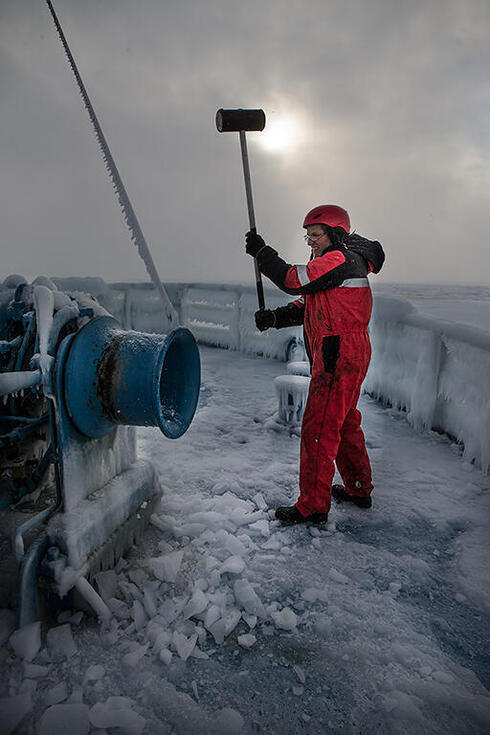 A crew member tries to break ice off the ship’s deck with a sledge hammer. Seawater froze quickly on exposed surfaces.

WWF scientists spent two weeks in April on a research expedition to the islands of Arctic Norway to study polar bears and their habitat. Aboard a former icebreaker ship they cruised along the shores of Svalbard, its snow-covered mountains flanking the shores in sharp contrast to the dark water.

They endured storm-tossed seas and frigid temperatures, but were struck most by the dramatic lack of sea ice and scarcity of mother bears with cubs.

By helicopter, the team conducted aerial surveys of polar bears and any females emerging from denning sites. They also placed tags on captured bears’ ears that track their location to determine when they go into dens. And they collected biological samples from bears to learn more about their health.

They gathered data on 53 bears total and placed GPS collars on seven females. However, they found far fewer females with cubs than expected and several adult bears in poor condition.

Researchers have already learned that Svalbard’s ringed seals (polar bears’ primary prey) are in trouble from climate change’s impact on the sea ice. Lack of ice, coupled with thin, flat ice with inadequate snow accumulation, is interfering with their reproduction.

Newborn seal pups need well-placed lairs—snow caves on top of the ice—that are next to ice blocks and have access to the sea to protect them from predators such as polar bears, Arctic Fox, and gulls. Without that protection, they are easy prey.

While that may be good news for bears now, it will lead to long-term problems, as ringed seal populations ultimately shrink and potentially shift locations.

In Svalbard, polar bears may already be responding to changing seal distributions and lack of sea ice. The team came to see if polar bears were shifting their den sites.

Bears need the sea ice edge to be close to land so they can easily come ashore when it’s time to den. Bears also need to be close to sea ice when they emerge from the dens in spring so that they can hunt ringed seals that are found there.

But during the last few years, the ice edge is too far away from shore at denning time. And in the southern islands, mothers with cubs are emerging later from dens to find the sea ice—and seals—are already gone.

During this expedition, the team found only two females with cubs, which is cause for concern. However, we need information on polar bear numbers and denning sites over the long-term to really understand the impact of shrinking ice on bears.

These are questions WWF and partners are working hard to answer. Information gathered on this expedition and in the coming year from the satellite collars will help a lot as well as contribute to our understanding of polar bears overall.

Learn more about the expedition.

Travel to See Polar Bears in the Wild

Visit the "polar bear capital of the world" and get up-close to polar bears in their natural habitat on a WWF Tour.