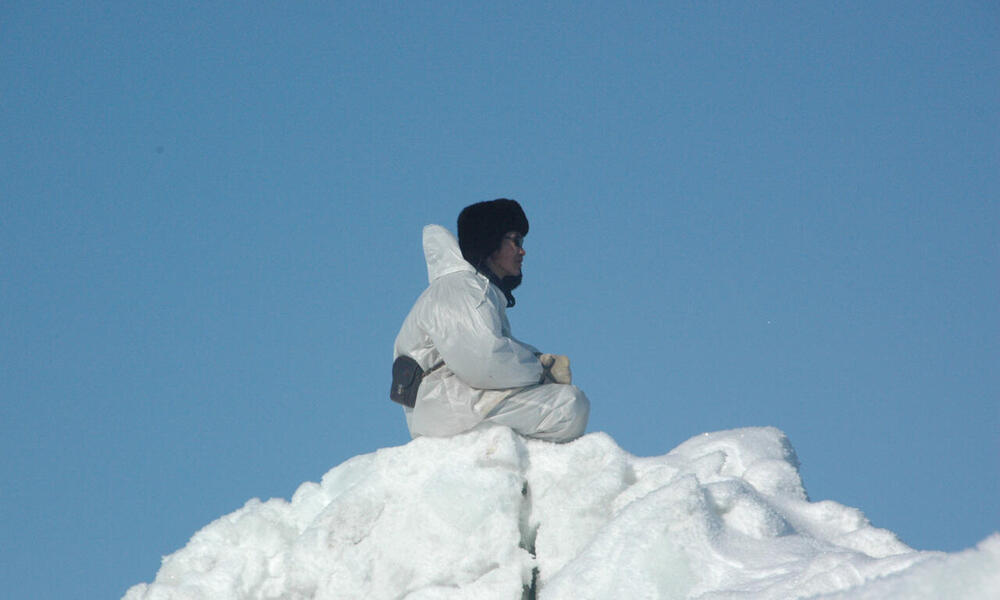 Fedot, a native Chukchi and member of the polar bear patrol in Vankarem village

Polar bears and local people are sometimes uneasy neighbors in Chukotka, a region in far northeast Russia. The bears frequent coastal areas near several indigenous Chukchi villages—the same places where walruses come to rest and care for their young.

It’s this proximity that can lead to conflict.

The Chukchi Sea polar bear subpopulation is faring relatively well, but sea ice decline is expected to force the bears to spend more time on land each summer. As a result, they come into closer contact with humans.

In 2006, a polar bear killed a girl in the village of Riyrkaipiy. In response to the tragedy, local hunters established the Umky Patrol (Umky, pronounced Um-kha, is Chukchi for polar bear). Created with support from WWF, the patrol works to diminish human-polar bear confrontation.

The Patrol’s first task was to lower the amount of easily accessible protein for bears—in the form of walrus and whale carcasses—washing up on the shores near human settlements.

They developed rules for tourists visiting the walrus resting sites to ensure that riled walruses do not trample each other in stampedes—leaving potential bear food behind. Melting sea ice, as a result of climate change, often forces walruses ashore, making them possible prey for polar bears.

These efforts are only the beginning. The Patrol has improved lighting in villages to keep children safe while walking to school in the dark; pushed for the conservation of public buildings where people can congregate in safety; and suggested the demolition of dilapidated housing where polar bears may seek shelter.

Patrollers have also educated villagers about bear behavior. For example, informational campaigns instructed people to stand far away from bears while capturing photos and video.

“It is very important to inform the villagers,” says Sergey Kavriy, a patroller from the town of Vankarem and the game manager for the Chukotka Department of Use and Protection of Wildlife Resources. “There is much to learn from our experiences and recommendations.”

Of course, the Umky Patrol also monitors the movements of the bears—especially during their fall migration. The patrollers warn villagers of approaching bears and take action to drive away bears that wander into villages. They plan to install public speakers to further help with such warnings.

As the patrollers educate locals and help villages establish safer conditions, the villagers are taking greater responsibility for their own safety.

“The situation has changed greatly in our village since we started the patrol,” says Kavriy.

Working with communities to protect people and bears from avoidable cases of conflict is an important part of WWF’s overall strategy to increase resilience of the polar bear and protect its remaining habitat. WWF also monitors polar bear populations and works to address the impacts of climate change on polar bears. We strive to ensure industrial development in polar bear regions is sustainable and does not damage wildlife populations and ecosystems.