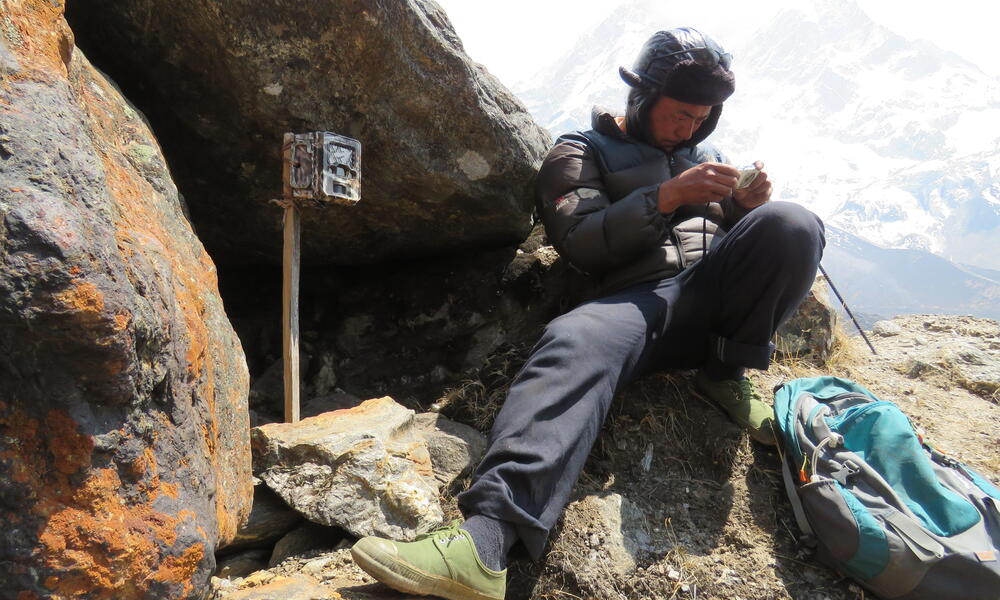 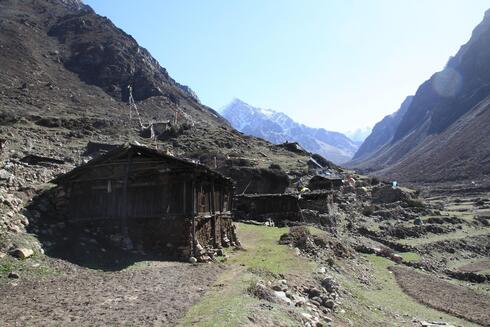 Just beyond the remote mountain village of Yangma in the high Himalayas of eastern Nepal, Nepali conservationists fitted a female snow leopard with a GPS collar. The collar will allow scientists to track this snow leopard’s movements daily for the next year, which will help us learn more about these mysterious and endangered cats. This female becomes the third snow leopard collared near Yangma since 2013, the first two having both been males.

Locals named this female cat “Lapchhemba” after a revered deity of the mountains who keeps a snow leopard as a pet. As a young adult female, Lapchhemba will be tracked as she explores the Himalayas, establishes her own territory, hunts for food, mates, and eventually become a mother contributing to the perpetuation of her species. In this manner, scientists will now get to learn the about the secret life of this snow leopard as she navigates adulthood in a fragile high mountain landscape threatened by both development and climate change.

A mountain community’s group efforts to protect snow leopards
Yangma is a Sherpa yak herding community that sits at an elevation of about 13,780 feet (4200 m) in Nepal’s Kangchenjunga Conservation Area, about a day’s walk from the border with China. For years, people slowly moved away from Yangma in search of better livelihood opportunities, an understandable choice because life in Yangma is not easy. From Yangma it is a two day walk to the nearest village growing green vegetables, and another two days walk beyond to the nearest road head and good schools, hospitals, and markets. But thanks to WWF’s snow leopard conservation efforts, this tiny community is getting a boost.

When snow leopard conservation work in Yangma began in 2014, the village had dwindled to just seven households. Since that time the population has rebounded to 11 families, drawn back in part by opportunities to participate in community snow leopard conservation work in the village. Each of these families has membership in the local Snow Leopard Conservation Committee established by WWF. WWF researchers have trained committee members on the basics of snow leopard monitoring, and experienced committee members now enthusiastically participate in joint WWF-Government of Nepal collaring expeditions. These members select sites for snares—tools used to capture snow leopards without harming them—based on ongoing camera trap and sign survey findings. They then set up and monitor a network of snares and assist scientists with collaring once a snow leopard is captured. Community involvement in these research expeditions ensures their success and motivates participants to better protect their local snow leopards.

What we can learn
As few as 4000 snow leopards may remain in the wild, and they are so well camouflaged and so rarely seen that they’re known as the “ghosts of the mountains.” Tracking these cats with recently developed GPS collar technology has given us the first detailed insights into their day-to day behavior and needs. This information will assist us in better protecting snow leopards from an array of threats to mountain environments, ranging from infrastructure development to climate change.

WWF works with mountain communities to educate people about snow leopard behavior and how to reduce loss of livestock to these cats. The goal of these efforts is to reduce the retaliatory killing of snow leopards that attack livestock, which is the single largest direct threat to snow leopard survival today. By working with mountain communities like Yangma, the USAID-funded WWF Asia High Mountains Project seeks to safeguard a future for remote mountain areas in which both people and wildlife can thrive—and so Lapchhemba and her descendants can roam majestic Himalayan peaks for generations to come.

Learn more about our work in Asia’s High Mountains.