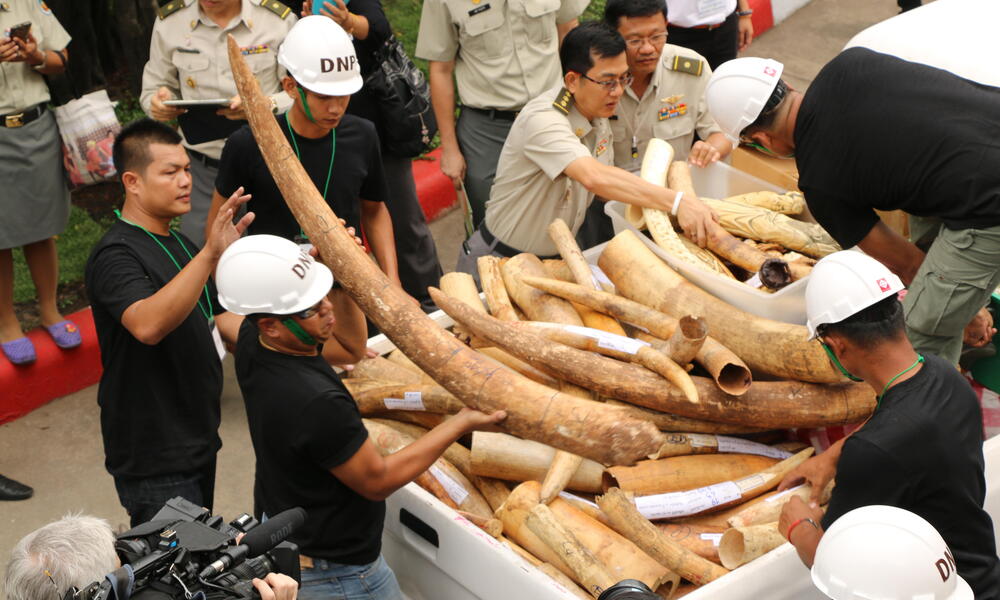 Prayers of Buddhist monks and Hindi priests rose in the air for the hundreds of thousands of elephants slaughtered for their ivory as an industrial crusher came to life in Thailand’s capital city of Bangkok. Over two tons of elephant tusks, carved ivory, and trinkets—most of it from elephants poached a continent away in Africa—made its way into the machine that ground the ivory into chips.

The solemn ceremony to destroy Thailand’s illegal elephant ivory follows a number of important laws the country passed to crack down on the illegal ivory trade.

“Thailand’s ivory destruction is more than just a symbolic event since it follows a series of important steps that the country has taken to tackle illegal ivory trade in the past year," said WWF’s Janpai Ongsiriwittaya, who played a lead role in conducting an audit of the elephant ivory stockpile held by the Thai government. “For too long Thailand has been exploited by wildlife criminals as both a gateway and marketplace for ivory poached in Africa and Asia. This event aligns the commitment of the Thai government and the will of the Thai people with the global priority of stopping the illegal ivory trade.”

“Thailand's ivory destruction is more than just a symbolic event since it follows a series of important steps that the country has taken to tackle illegal ivory trade in the past year.”

Around 30,000 African elephants die at the hands of poachers every year, their ivory destined for countries like Thailand. For years, the country was the world’s largest unregulated ivory market. This April alone, Thai Customs seized over 7 tons of illegal African ivory.

Thailand has faced intense global pressure to shut down its national elephant ivory market. Faced with the threat of international trade sanctions under the Convention on International Trade in Endangered Species (CITES)—a treaty that regulates international trade in wild flora and fauna—the government started implementation of a National Ivory Action Plan. The elephant ivory destruction reinforces Thailand’s commitments to follow through on the plan and will be included in a progress report to the CITES Standing Committee in mid-September.

Thailand passed several new regulations earlier this year. Owners of domesticated, privately owned Asian elephants had to register their animals. All ivory had to be registered by April 21, resulting in over 220 tons of elephant ivory being reported by more than 44,000 Thais. The government also made African elephants a protected species in Thailand. The country then sent a signal of its determination to tackle elephant ivory trafficking and wildlife crime in July by co-sponsoring a historic UN General Assembly resolution to address illegal wildlife trade.

“Considerable progress has been made this year but there will be challenges ahead with implementing these new regulations, clamping down on illegal traders and reducing demand,” Ongsiriwittaya said.

WWF remains concerned about how legal ivory and retail sellers will be tracked under the new system, and what type of sales certificates will be produced for retail customers. Important questions remain about how the Thai government will be able to enforce its new ivory laws, how future stocks and retail markets will be inspected and what penalties will be given to non-registered ivory retailers and traffickers. WWF has played a critical role in helping Thailand develop a new regulatory framework. We also engaged 1.3 million Thais who spoke up for elephants and against illegal ivory trade as part of a WWF’s Chor Chang Can Save Elephants campaign earlier this year.

Do your part to stop wildlife crime. Act now to save elephants.