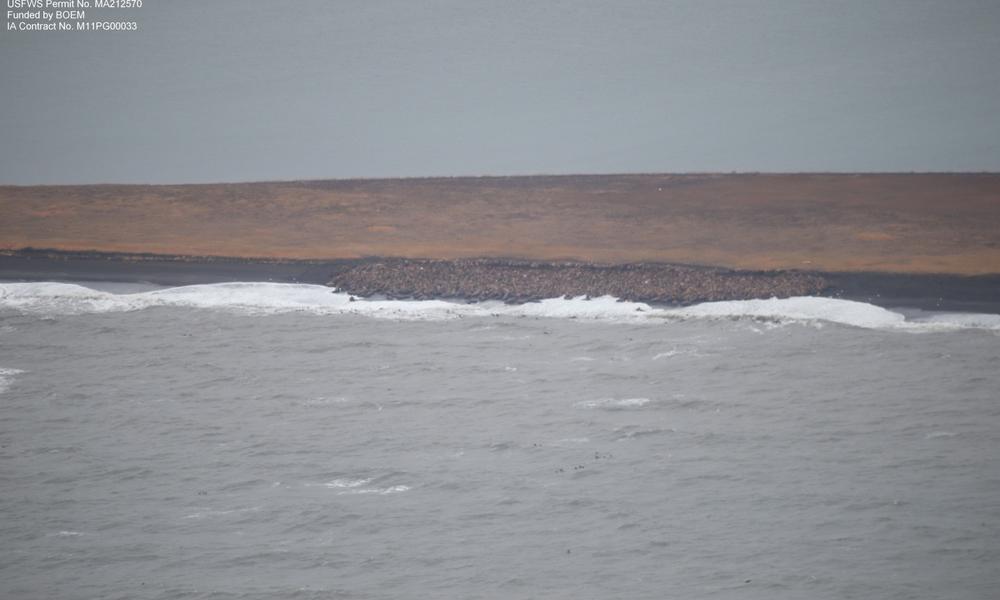 About 10,000 walruses have come ashore at Cape Schmidt in Chukotka, Russia, on Sept. 27. Because of the tight quarters, they are beginning to clamber up the cliffs, said RIA Novosti World Wildlife Fund (WWF) Russia “polar bear patrol” project leader Viktor Nikiforov. The walruses have taken over the entire eastern shore of the cape and have begun to scramble up the cliffs.

As Arctic sea ice has declined to the sixth-lowest extent on record this month, a growing number of walruses—up to 4,000 at one location by Sept. 14—are being forced to haul out on land. Ordinarily at this time of the year, the walruses—mostly females and their young—would haul out and rest on sea ice offshore in their preferred feeding areas such as Hanna Shoal in the Chukchi Sea north of Alaska.

However, rapid warming of the Arctic has resulted in a dramatic decline in the extent of sea ice. Once the ice disappears from the feeding areas in late summer or early fall, the walruses must swim long distances to reach the Russian and Alaskan shorelines where conditions are far less favorable and more hazardous than on the ice.

The haul out to land

This newly published photo taken by the Aerial Surveys of Arctic Marine Mammals (ASAMM) Project and obtained by WWF, shows up to 4,000 walruses that have hauled out along the coast near Point Lay, Alaska. The number of walruses on land is likely to swell in coming days and weeks. The next opportunity for an ASAMM flight over the Chukchi Sea probably is the afternoon of Sept. 19.

“The dramatic picture of walruses massing onshore is worth a thousand charts and graphs, reminding us that climate change is profoundly disrupting life on an epic scale in the fragile Arctic,” said Lou Leonard, vice president of climate change programs for WWF. “Arctic sea ice has sharply declined over the last decade, threatening Arctic communities and wildlife. This is another alarm bell warning that global greenhouse gas emissions must begin a steep long-term decline within this decade to avoid far more disastrous consequences. Governments have ample opportunities to act starting with next week’s negotiations in Montreal on international aviation pollution.”

The aerial surveys are funded by the U.S. Bureau of Ocean Energy Management and conducted by the National Marine Fisheries Service.