Tibetan Monasteries at Work for the Environment

With help from WWF's Sacred Earth program, a program is established to build conservation leadership 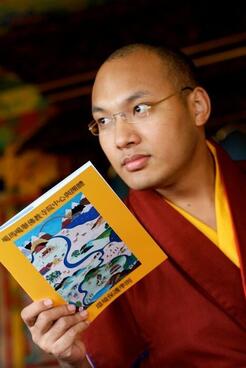 At the Rumtek Buddhist Monastery, high in the Eastern Himalayan Mountains, saffron-robed monks are installing a set of five homemade solar water-heaters. The project, instituted by the monastery’s Environment Conservation Committee, pushes Rumtek closer to its goal of setting a standard on environment conservation that other monasteries, nunneries, and non-Buddhist institutions might follow.

This one small project in East Sikkim, India, is part of a much larger effort led by His Holiness, the 17th Karmapa, Ogyen Trinley Dorje, the latest reincarnation in a line of Tibetan spiritual leaders that stretches back to 1110 CE. At age 26, he leads more than one hundred monasteries spread across the Himalayas and heads the Karma Kagyu lineage of Tibetan Buddhism.

In 2009, the Karmapa asked WWF to help him establish a far-reaching program called Rangjung Khoryug Sungkyob Tsokpa, usually simply called Khoryug, or “environment” in Tibetan. Khoryug is a non-sectarian association of Tibetan Buddhist monasteries dedicated to environmental protection on the Buddhist principle of the interdependence of all sentient beings and the Earth itself.

Under the guidance of His Holiness, Dekila Chungyalpa, director of WWF’s Sacred Earth Program, led training conferences and planning workshops for the designated monastic environmental coordinators. She advised them on their project concepts and workplans, as well as the best ways to partner with nearby communities and NGOs.

The ultimate goal of the Khoryug program is to make monasteries and nunneries in the Himalayas into environmental leaders and problem-solvers in their own communities. WWF helped the Karmapa produce a book of environmental guidelines for Buddhist monasteries, centers, and communities. The partnership also produced 108 Things You Can Do To Save the Environment, a set of guidelines for individual Buddhist practitioners that has been translated into more than ten languages and adopted by Buddhist centers all over the world, including in Brazil and Poland.

Along with these publications, Khoryug has been hard at work improving the local Himalayan environment and providing examples of climate change adaptation and environmental stewardship through a range of projects such as solar power, organic farming, and rainwater harvesting. More than 55 projects led by Khoryug monasteries and centers address such problems as forest degradation, wildlife trade, and climate change.

The project’s trainings and activities have resulted in an experienced cadre of more than 100 senior monks and nuns with understanding of basic environmental science and hands-on expertise in environmental management. The Karmapa’s website dedicated to the program, www.khoryug.com, exposes the larger public to the efforts of these hardworking environmental caretakers.

The Khoryug program is supported by WWF’s Sacred Earth program, which partners with religious leaders and communities around the world to collaborate on a wide range of environmental conservation initiatives. Sacred Earth aims to tap into ethical and spiritual ideals around the sacred value of Earth and its diversity to help religious communities take action on watershed restoration, climate change adaptation and mitigation, and wildlife protection.