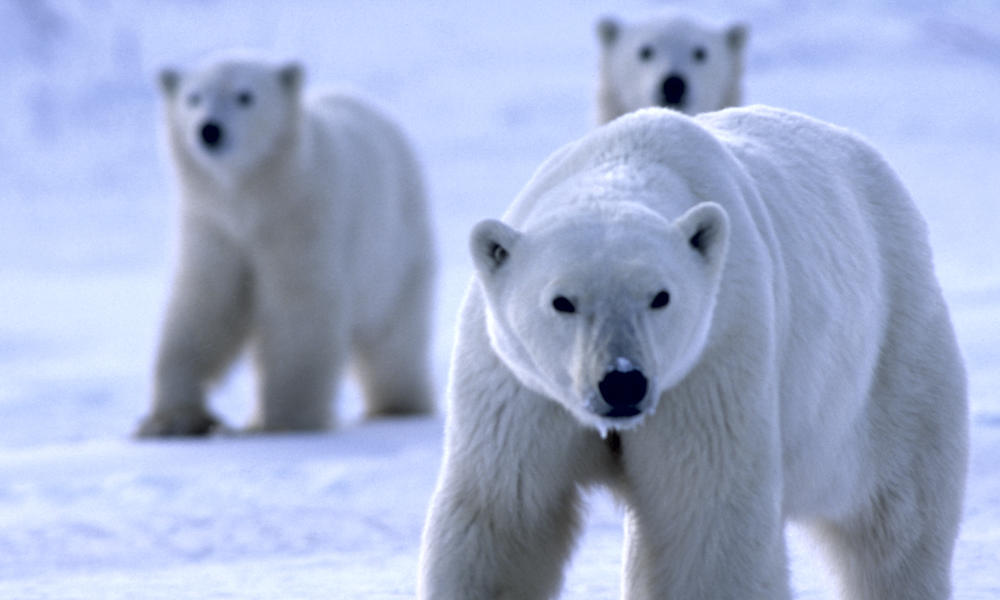 Between the ash-colored sky, misty rain and snow-covered shoreline, I struggled to make out the polar bears that our captain insisted were straight ahead of us. No matter how much I strained, toggling between binoculars and naked eye, all I observed was thick, milky nothingness.

But as our small boat slowly motored in the choppy water along Edgeøya—an uninhabited island in the high Arctic of Svalbard, Norway-three hulking forms suddenly appeared. One polar bear was walking away and disappeared into the mist almost as quickly as it had appeared. Another bear was curled up asleep.

And a third bear was right there - right there! How could I not see her? She was moseying at a nice clip, seemingly purposeless but probably searching for morsels to eat.

Run-of-the-mill stuff in the life of a polar bear, but this was something special. This bear was wearing a satellite radio collar.

Of the 20,000 to 25,000 polar bears left in nature, only a handful are tracked by scientists in this manner. Finding her was a rare and random moment in the wild. (And, incidentally, we know it was a female; male polar bears cannot be collared, because they have wider necks than heads and the collar would slip right off). We watched her for as long as we could—about 30 minutes, the most we could tolerate sitting in a rubber boat in 18-degree rain. Once we returned to the expedition ship, I went online immediately so I could follow her on WWF’s Polar Bear Tracker.

Izzy is the name researchers at the WWF-supported Norwegian Polar Institute gave to this particular bear. She was six years old, found 15 months earlier with a male cub close to where I observed her. In fact, Izzy never strayed far, as I learned tracking her online from my desk in Washington, D.C. She kept to a range nearly 1,400 square miles—tiny for wanderlust-filled polar bears, but not unheard of.

During the months I tracked Izzy, I worried about her. Was she eating? Getting out onto the ice? Was her cub still alive? Soon I had real reason to worry: Izzy stopped showing up on the Polar Bear Tracker. Her satellite collar may have fallen off, or the sensitive electronics embedded within may have petered out. That happens frequently enough.

But I also know there are worse fates that could befall Izzy and other polar bears in the wild.

Did she starve to death? Less sea ice because of climate change means less surface area for polar bears to hunt for seals. Certainly bears die of natural causes, but did her health wane because of exposure to pollutants that waft into the Arctic now via air currents? At least she is in a protected area and hasn’t suffered the impacts from increasing human use of the regions resources, as some of her arctic brethren have.

I still go onto the Polar Bear Tracker from time to time, hoping Izzy shows up again. If scientists found her once, and if I found her once, surely she could be found again and re-collared. She could still be out there, in the thick, milky nothingness.

Make a symbolic polar bear adoption to help save some of the world's most endangered animals from extinction and support WWFs conservation efforts.