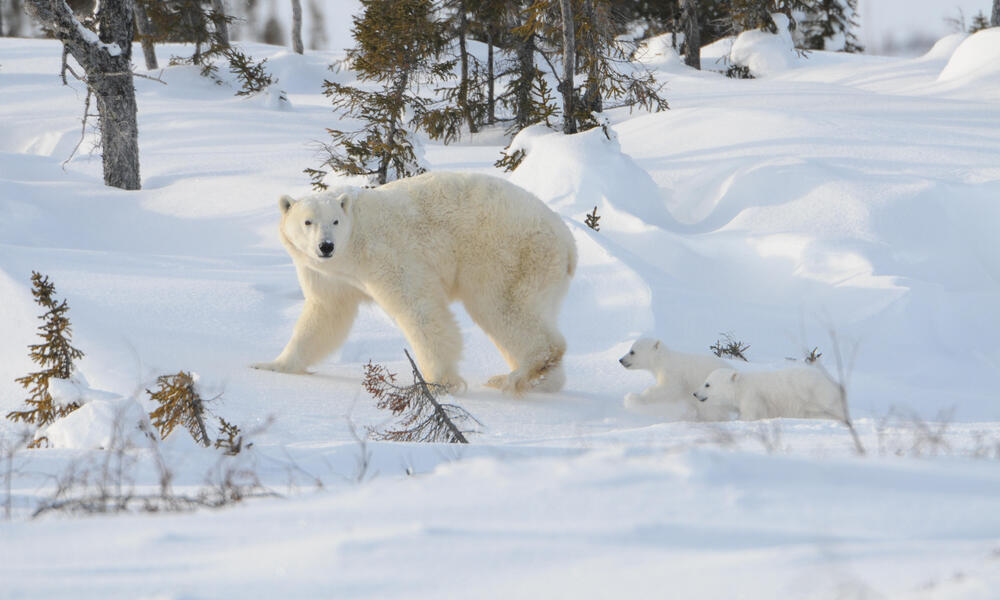 Large swaths of Arctic sea ice shrink every summer in the northern ocean, but September 2012 showed the lowest amount of sea ice on record. Changes to the Arctic environment affect communities and species—especially ice-dependent animals like polar bears. WWF’s Rhys Gerholdt visited the frozen Arctic to see polar bears and reflects on the challenges ahead in this rapidly changing climate.

My story begins in the Arctic. I'm riding in a beaten-up van with caterpillar-tracks, inching my way across the tundra of northern Canada, 40 miles from Churchill.

After a two hour-long drive I reach my destination—the Arctic wilderness. Battling biting cold winds and wrapped in a massive parka, I get out and stand alongside my colleague Peter Ewins, WWF Arctic wildlife biologist.

Less than 100 meters away, a polar bear mother rests as her 10-week old cub alternates between tugging on her neck and batting at barren twigs. I'm awed by how this immense animal can be so gentle, patiently tolerating the cub's tugs and nips. The mother polar bear's sheer size, magnificence and affection toward her offspring are amazing.

But I'm not in the Arctic to simply experience the wonder of this species; I'm here because the plight of the polar bear is far from certain. Researchers say that by 2035—when this young cub is already fully grown—the lack of sea ice near Churchill will make life here impossible for the polar bear to survive.

A Future Under Threat

A polar bear’s way of life is deeply connected to sea ice. Most importantly, the ice provides a platform from which to hunt seals, whose thick layers of blubber provide energy for survival.

Higher temperatures from climate change are causing sea ice to form later and melt sooner than ever before. This forces polar bears ashore before they can build up sufficient body weight to stay healthy until returning to the sea ice months later.

Scientists have found that polar bear litter sizes are steadily declining because mothers are too malnourished to bring cubs to term or nurse them as infants. Historically, triplets and twins would commonly emerge from maternity dens, but now twins and singletons (like this cub before me) are now the norm.

WWF recognizes the urgent need to help polar bears. We continue to monitor their populations, study ice conditions and engage with indigenous communities to collect traditional knowledge which may help bears. It is an uphill battle, but we are dedicated to ensuring species like this polar bear and her cub have a habitat in the future.