Understanding the Plight of the Sumatran Rhino 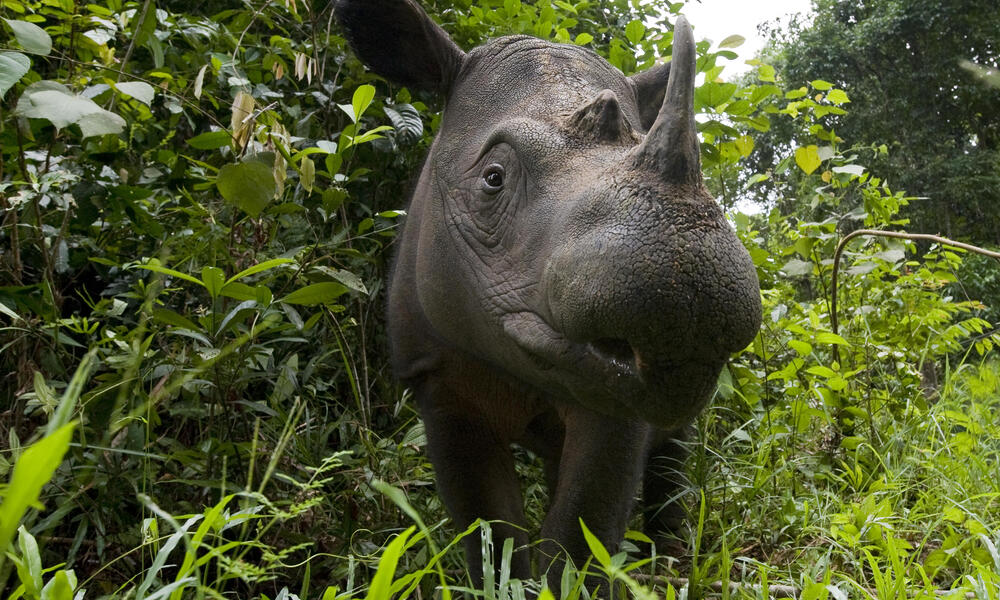 Dr. Barney Long leads WWF’s work on species conservation in Asia, focusing on tigers, rhinos, elephants and orangutans, as well as other lesser-known species endemic to the places where we work. He has conducted baseline biodiversity assessments to establish new protected areas, including helping establish Vietnam’s first community co-managed protected area and run large-scale landscape conservation programs. Follow him on Twitter and Facebook.

A skeleton in the depths of the Sumatran rain forest changed me from an aspiring wildlife biologist to a nature conservationist.

At the age of 18 I left my hometown of Leeds, England, to volunteer on a research project in the heart of this Indonesian island. One incident during that first venture into the rain forest changed the trajectory of my career: the finding of a skeleton. My naive excitement at finding a skeleton in the forest was short-lived as upon inspection it was identified as belonging to a Sumatran rhino. With the top of the skull clearly hacked off and the vegetation trampled in a circle around the heavy-duty wire snare, there was no escaping the fact that the animal had been poached. From that moment on I wanted to conserve and not research the animals of the rainforest.

Almost 20 years later, I came face-to-face with my first live Sumatran rhino at the Sumatran Rhino Sanctuary in Way Kambas National Park, a fantastic captive breeding facility run by the Rhino Foundation of Indonesia and the International Rhino Foundation. With wistful eyes poking out of concentric folds of grey and prehistoric looking skin, the Sumatran rhino seemed to beg to be left in peace. Watching them walk through their forest—gently, purposefully, occasionally picking a leaf off a branch to chew—made me wonder what they have done to deserve being persecuted to extinction.

“Rhino horn has no medicinal properties, but even if it did, it belongs to rhinos.”

Not many people have heard of the Sumatran rhino, let alone understand its plight.

With possibly as few as 100 left in a handful of small, isolated populations, the Sumatran rhino is arguably one of—if not the most—threatened large mammal in the world. Once widespread across Southeast Asia, they have been lost almost entirely due to poaching for their horn. Rhino horn has no medicinal properties, but even if it did, it belongs on rhinos. They are an integral part of a rhino’s social behavior and therefore define them as a species. Driving a species to extinction to possess something that has taken millions of years of evolve is senseless, selfish and short-sighted.

Last week, the Asian rhino range countries made an unprecedented commitment to increase the populations of the three species of Asian rhino by at least 3 percent annually by 2020. This was preceded by the Sumatran Rhino Crisis Summit in April where a bold, new plan shifted the conversation away from conserving rhinos to recovering Sumatran rhino populations. The plan involves complete protection of zones within three national parks, moving isolated, non-breeding rhinos in these protected zones and actively managing the population to ensure the highest rate of breeding possible.

This could well be the last viable option for Sumatran rhinos. It will be critical to establish the number, distribution and demography of the remaining wild Sumatran rhinos in order to implement this comprehensive plan—a task easier said than done. Sumatran rhinos are surprisingly hard to find. They are secretive animals that live at low-density in dense rainforests.

Developing a method to study and protect Sumatran rhino populations

Two weeks ago I was in Sumatra with other rhino conservationists to develop a standard survey method to study Sumatran rhino populations across all of Sumatra. Just identifying how many Sumatran rhinos there are and where they are is a mammoth undertaking: 10,550 days of survey effort covering 6,720 square kilometers of rain forest, requiring enormous data storing and analysis.

It comes at a high price tag: $2 million.

It’s a large sum of money, especially in this economic climate, but the future of an ancient, noble species depends on it. I certainly will make every effort to stop this rare, and in my eyes, beautiful animal from slipping away into nothingness.