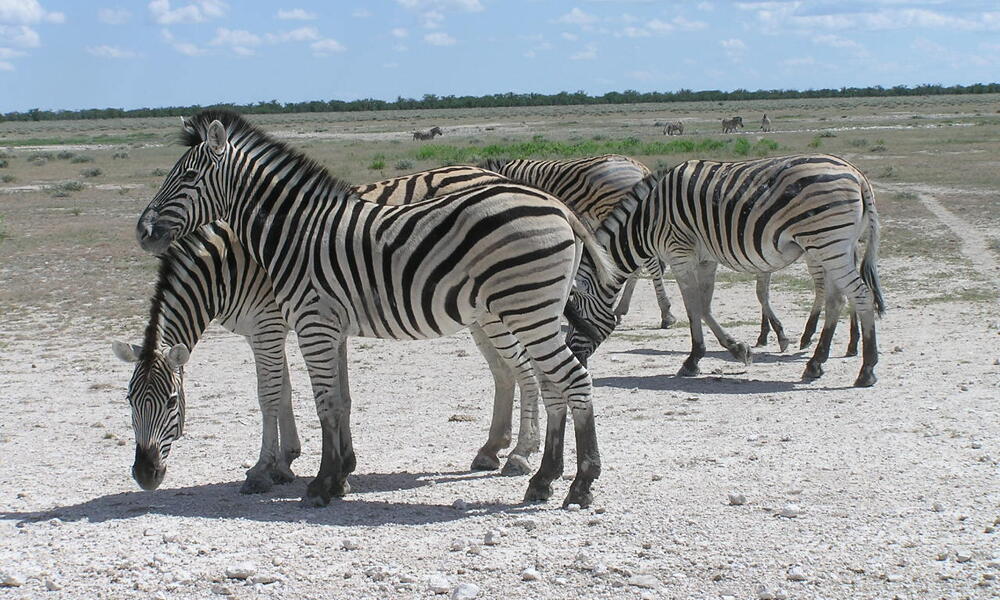 In a groundbreaking study, a team of researchers that includes WWF staff discovered Africa’s longest land mammal migration. The migration of Plains (or Burchell's) Zebra stretches from Namibia to Botswana—a distance of more than 300 miles roundtrip.

The migration—which involves up to several thousand zebra traveling in a north-south direction—occurs entirely within the largest transboundary conservation area in the world, a region known as the Kavango Zambezi Transfrontier Conservation Area (KAZA).

It’s a stunning find to realize such a large and highly visible animal like the zebra has moved this kind of distance and appears to do so every year.

“The findings of this study emphasize the importance of trans-frontier conservation areas in conservation of the greater landscape” said Pierre Du Preez, Chief Conservation Scientist at MET in Namibia. “This study has played a crucial role in helping determine a crucial wildlife corridor in KAZA.”

The research team—comprised of WWF, the Namibian Ministry of Environment and Tourism and the Botswana-based conservation organization Elephants Without Borders—fitted eight female zebras with satellite collars in order to monitor their movements.

Female zebras were chosen because they travel in herds and are gentler on the collars than male zebras. GPS tracking allowed researchers to get exact location fixes for each zebra every 4-5 hours during the journey.

The zebra complete the first half of the trip over two to three weeks in November and December, probably in search of fresh grazing in Botswana’s Nxai Pan National Park. The rainy season’s ample rainfall allows the zebra to thrive away from permanent water sources for an average of 10 weeks before they return to the Chobe River along the Namibia/Botswana border for the dry season

Beyond the record distance logged, the findings are significant as they confirm the need to preserve this stretch of land for migratory use.

“In order to fully understand whether we’re doing a good job at conserving wide-ranging species like zebra, we need a detailed understanding of their space requirements and movement patterns,” said Robin Naidoo, senior conservation scientist at WWF and lead author on the study.

Zebra migration routes in other parts of Africa have been disrupted, often by fence construction. As a result, zebra populations diminish and local economies that depend on ecotourism may suffer. Phenomena like this newly discovered migration show these animals need large, wide open spaces in order to survive.

Conservation areas the size of KAZA make that possible.

Naidoo has worked in the area since 2007, working with a variety of partners studying wildlife movements in KAZA . The region’s 109 million acres, roughly the size of Sweden, cross five southern Africa countries—Angola, Botswana, Namibia, Zambia and Zimbabwe.

WWF is already investing in strategies to make it a world-class tourism destination. And KAZA’s unprecedented scale allows for continued research on the many species that call this region home, including 44 percent of Africa’s elephant population.

The new study’s findings are also important on a global scale. Migratory routes of species like monarch butterflies, wild salmon and whales are increasingly disrupted and declining.

“In the same way that we’re concerned with saving numbers of species and habitats, we should also be concerned with conserving phenomena that are inspiring spectacles in the world of nature. Mass migrations are one of those,” said Naidoo.

WWF's Jon Hoekstra on the impact of the discovery

Read the full study in Oryx

WWF is on AmazonSmile

AmazonSmile has the same products and prices as Amazon.com, but 0.5% of each purchase price is donated back to WWF.

Make a symbolic zebra adoption to help save some of the world's most endangered animals from extinction and support WWF's conservation efforts.