Understanding effects of corruption on law enforcement and environmental crime 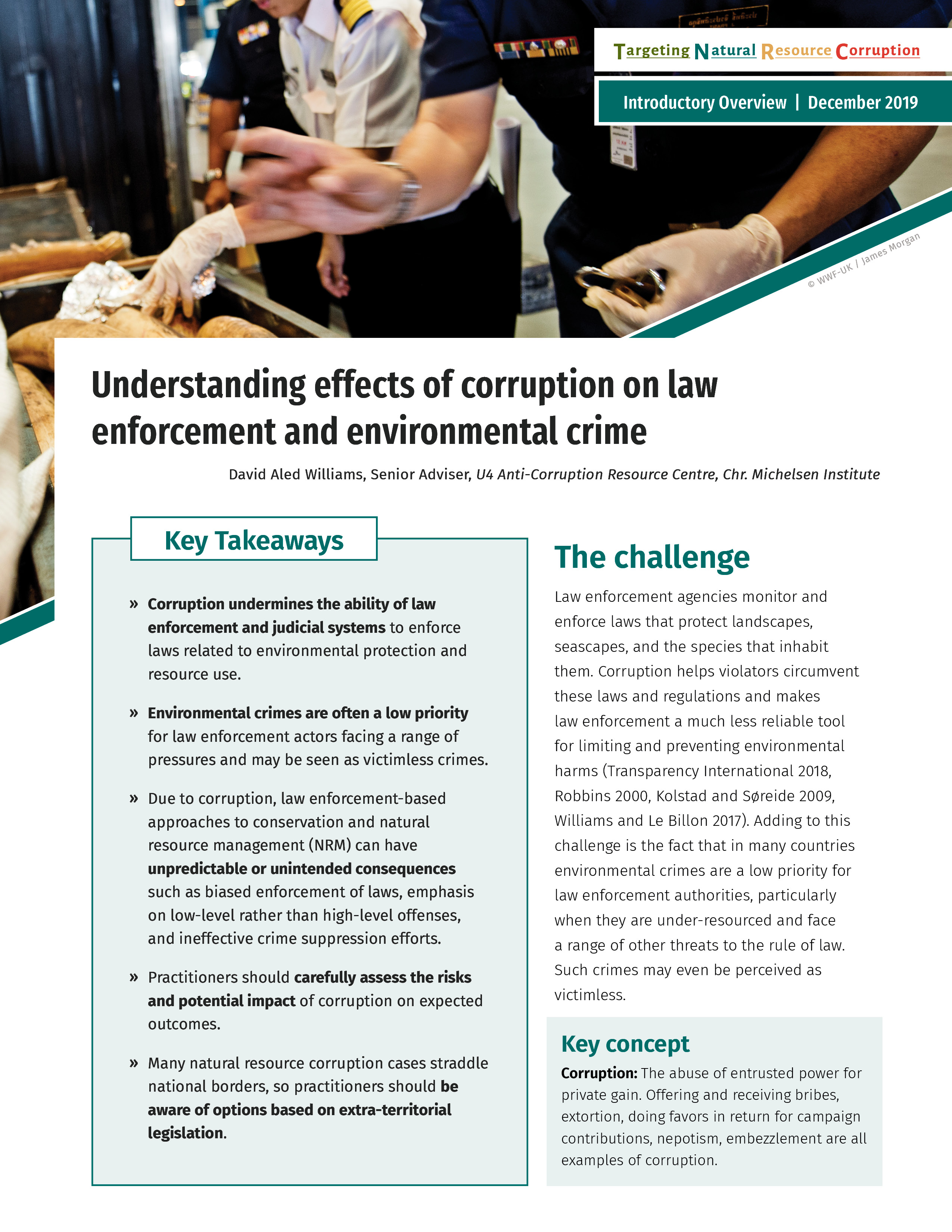 Law enforcement agencies monitor and enforce laws that protect landscapes, seascapes, and the species that inhabit them. Corruption helps violators circumvent these laws and regulations and makes law enforcement a much less reliable tool for limiting and preventing environmental harms (Transparency International 2018, Robbins 2000, Kolstad and Søreide 2009, Williams and Le Billon 2017). Adding to this challenge is the fact that in many countries environmental crimes are a low priority for law enforcement authorities, particularly when they are under-resourced and face a range of other threats to the rule of law. Such crimes may even be perceived as victimless.

Corruption: The abuse of entrusted power for private gain. Offering and receiving bribes, extortion, doing favors in return for campaign contributions, nepotism, embezzlement are all examples of corruption.

Environmental crime: Acts that inflict serious harm on the environment and its human and non-human occupants. They may be strictly illegal, or in some interpretations, these actions may constitute crimes even if they are not made illegal by specific domestic or international laws, for instance because governments may legislate themselves the right to inflict serious harm. Environmental crimes may be committed by individuals, corporations, or governments (White 2017). Law enforcement approaches to reducing environmental crime can only address acts that are strictly illegal.

What are the links between environmental crime and corruption?

In some cases, the framework and implementation of the law itself can be skewed by historic corruption, such that laws themselves are biased, or perceived as biased, for example because they penalize minority groups more severely than majority groups. In worst-case contexts, corruption in the guise of patron-client networks is so engrained in the political control of natural resources that it is the system itself (Robbins 2000, Williams and Le Billon 2017).

The presence and impact of corruption mean that efforts to reduce environmental crime through law enforcement can have unpredictable or unexpected effects. Two common ways that corruption can undermine law enforcement demonstrate this point.

Selective or biased ground-level enforcement: Corruption can direct enforcement toward less powerful actors and lower-level crimes. Lower-level crimes such as transportation violations or poaching, apart from being relatively easy to detect, provide opportunities for law enforcement officers to extort bribes thanks to their superior power position in that situation. In institutions where bribes are distributed up the bureaucratic chain, this creates specific incentives within the bureaucracy to allocate law enforcement resources on activities that that maximise opportunities to collect bribes. There is less of an incentive to target illegal activities where the opportunities for payments are fewer. This also means that illegal actors who are able to pay can bypass apprehension or prosecution. In Cameroon, for example, the suspension of small-scale logging licences was found to have negative impacts on the livelihoods of small-scale loggers because the price of bribes to law enforcement increased (Cerutti et al 2013).

Interfering in the suppression of illegal activities: Prosecutors and judges, as well as law enforcement officers, can be subject to political interference or can be motivated by corrupt interests. Corruption can result in less suppression of illegal activities, for example, during the preparation of cases. In Honduras, for instance, political interference was blamed for the loss of documents in a case implicating a number of the largest timber firms operating in the country (Goncalves et al 2012). Although failure to collect and present significant evidence can be the result of weak capacity or limited resources, in many cases corruption and political interference are also present. More directly, bribe payments to judges have also been known to impact on charging and levels of punishment.

Corruption, conservation and minorities in Kenya’s highlands. Research has documented cases of officers in Kenya’s Forest Service (KFS) allocating forest land for logging and cultivation in exchange for illegal payments. Forest communities in Kenya’s highlands have interpreted attempts to evict them as a form of rent capture and as part of broader historic strategies of forced assimilation. Evictions also remove potential witnesses to illegalities. (Cavanaugh 2017)

How can conservation and natural resource management programming respond?

Assess the potential impact of corruption on law enforcement objectives
Efforts to strengthen the detection and suppression of illegal natural resource use through law enforcement often fail to address the drivers of illegal activities and the accompanying corruption. The results can be injustice for local communities, biased or selective enforcement, and ultimately failure to achieve conservation and natural resource management goals.

Conduct a thorough risk analysis
To avoid the worst risks, practitioners working in this area or considering support to law enforcement as a way to reduce environmental crimes need to assess carefully the specific actors, interests, and power dynamics involved in environmental crime and related corruption. Such corruption risk assessments, whether formalized or informal, are an essential tool for practitioners.

Consider international resources
Many natural resource corruption cases straddle national borders and reach into financial institutions and/or commodity chains in OECD countries. For some organizations or agencies, international or inter-agency cooperation based on extra-territorial legislation such as the US Foreign and Corrupt Practices Act (FCPA), the US Lacey Act, or the UK’s Bribery Act may be an effective alternative for environmental corruption cases.

1For example, an incorrect record of species in a specific location can allow developers to convert habitat for protected species. (See Williams and Dupuy 2017)

Downs, F. 2013. Rule of law and environmental justice in the forests: The challenges of “strong law enforcement” in corruption conditions. U4 Issue No. 6. Chr. Michelsen Institute. Bergen.